As I sorted through old photo albums recently, I discovered pictures from my first 1:6 scale populations! Unfortunately, the photos were taken on film with a camera that didn’t do closeups well. However, for the sake of historical curiosity, I have scanned the best ones and annotated them. 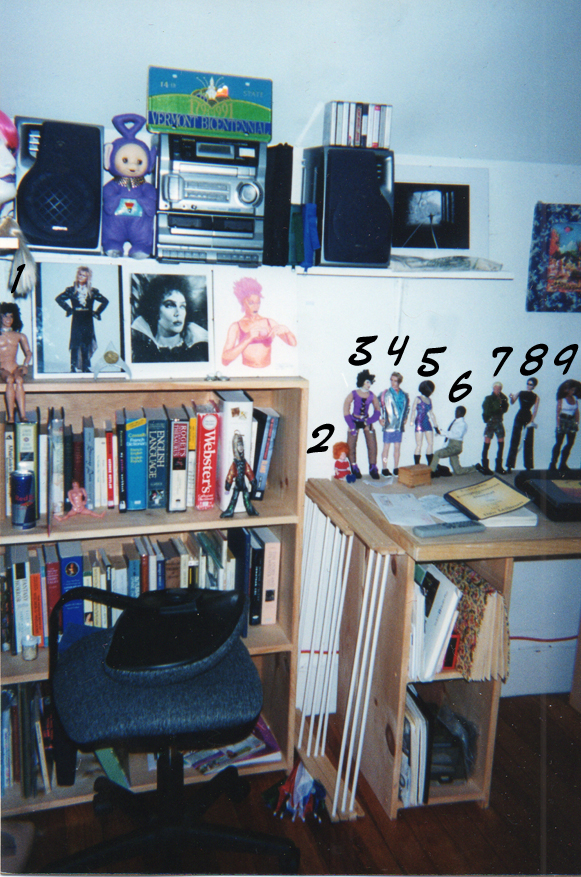 Details of my dolls as of October 17, 2001.
Mary Lee, a Takara Cy Girl Shadow wearing default bodysuit, boots and sword, with Takara Cy Girl Jet trenchcoat. Coat and boots customized by me. I described her contemporaneously as "a sword-wielding book guardian." 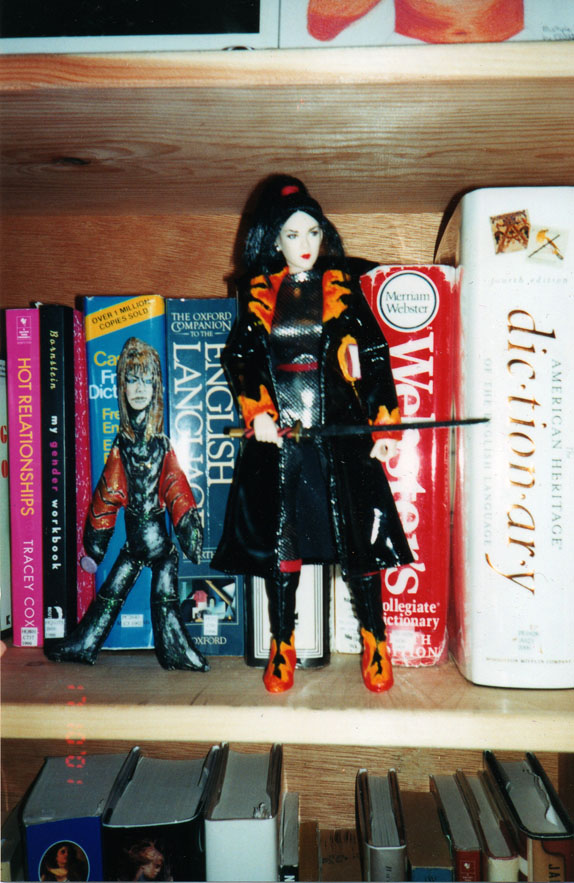 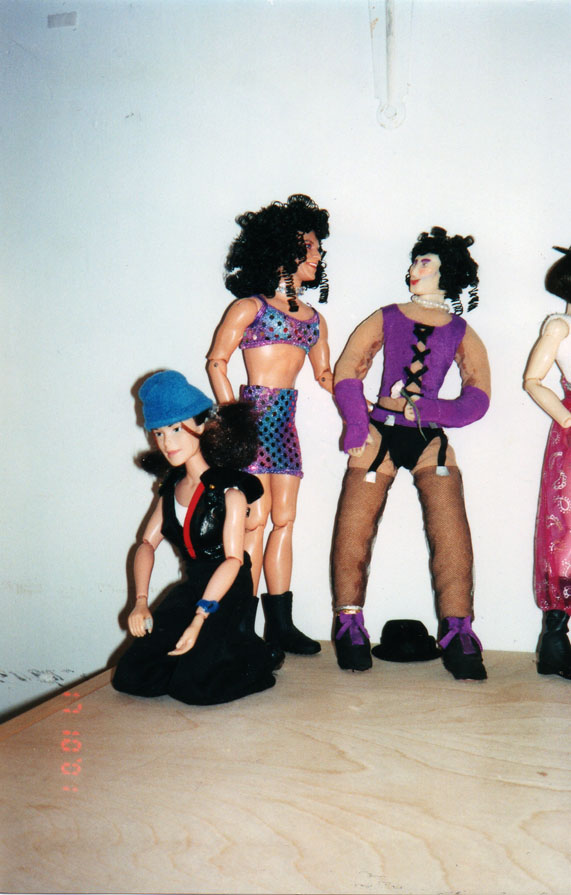 From left to right:
Frank.
Amelia, a Takara Cy Girl AJ. Partner of Willy. Has an uneven haircut because she did it herself. I described her contemporaneously as "a 16-year-old bad-ass… with one hand missing due to a motorcycle accident [ah, those detachable Cy hands]. She wears her baseball cap backwards and adopts a rebellious, defiant stance. Very sexy in [Takara Cy Girl] Kat’s tank top and a pair of hot pink hot pants from ‘Lauren,’ a horribly cheap dollar-store find."
Willy, a Hasbro African-American Vietnam Nurse GI Jane. Partner of Amelia. Gentle, courtly drag king. Bulge provided by foam earplug in pants.
Athena, a Hasbro Caucasian 82nd Airborne Helicopter Pilot GI Jane. Partner of Trinity. Ambivalent about her recently discovered submissive interests and her enjoyment of bondage and domination. Bra and stockings from Play Along Britney Spears doll.
Trinity, a N2 Toys Trinity Matrix action figure. Partner of Athena. Imperious, somewhat crabby domme who ties down Athena with gauze bandages from Hasbro African-American Vietnam Nurse GI Jane. Mostly default outfit minus trenchcoat. 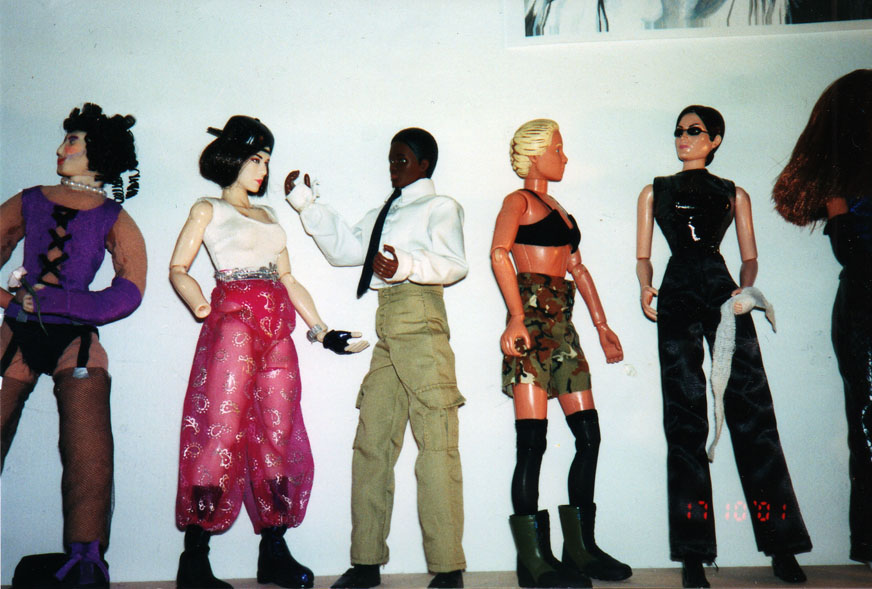 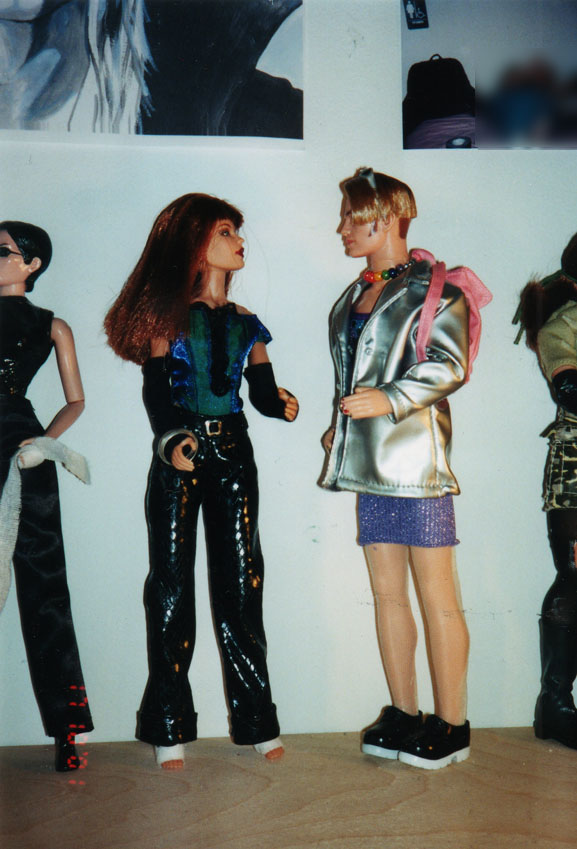 From left to right:
Tory.
Ladyhook, a Takara Cy Girl Kat. Shy painter and drummer with hooks for hands. Default outfit except for shirt [from Hasbro African-American Vietnam Nurse GI Jane] customized by me.
Keats, a Takara Cy Girl Jet. Dominatrix/slam poet whose arrogance belies loneliness and insecurity. Holding a whip I made from a toothpick with braided embroidery floss at end. Default outfit except for overshirt from Play Along Britney Spears doll. 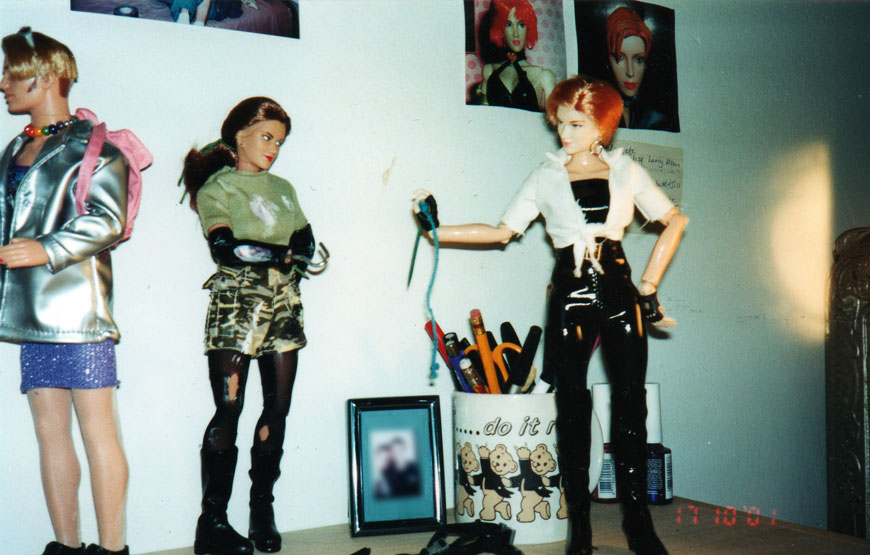 This entry was originally posted at http://modernwizard.dreamwidth.org/1510076.html. You can comment here, but I’d prefer it if you’d comment on my DW using OpenID.