Since I’m undecided about what type of body to get for Frank, I decided to stick him on Jareth’s body, even though it’s the wrong sex, just to see how the fit was. With the addition of a rather flattened old wig of Zephque’s and a top hat, he actually looked pretty groovy. I wanted to invite him up to the lab to see what was on the slab.

The head fits on the body, though Yukinojo’s broad features were clearly built for a wider neck. Haund’s neck seems very slender by comparison. Furthermore, the Yukinojo resin has more undertones of orange and brown than the normal Haund body, which is very, very, very pale. Additionally, since Yukinojo’s neck socket is very deep, the poseability of the head on the Haund body is limited. It turns from side to side, but cannot look up and down much. 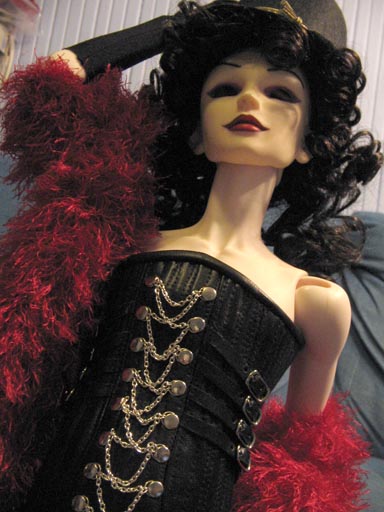 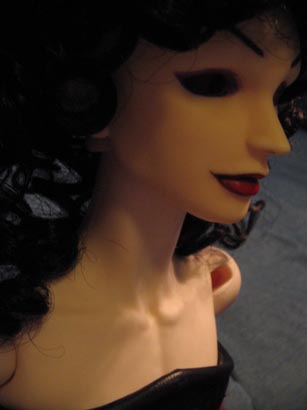 And now I know why Jareth was wearing Frank’s clothes 😀

You want double-jointed, so for a body there isn’t much to choose from at the moment. I say hang back and wait a little, take Frank to a doll-meet and see if there are any bodies he might suit. An SD16 female is bound to be in the works, and Serendipity are working on 60 cm dolls now. For sheer bustiness, you will need most likely to do some plastic surgery. Or in true Frankenstyle, you know I am working on doublejointed legs to go with those arms I did… I would say a torso will come later, and I have a head I want to sculpt as well, where a thicker neck will be important.

Finally another thing I can think of is the Domuya flexible body. It looks a lot like a CG 2.0, but it might not be tall enough for you? It does have bendy toes though. Check posts by evildolly on DoA, with a Madoka head on the Flexi D-One body (ver. 2)

omg that outfit is AWESOME! where-ever did you get it? 😀

ok, weirdly enough, he looks like this guy i used to play live action vampire the masquerade with……he cross-dressed, and looked that good too.

only advantages, he was my size, liked to hug, had seven diffrent dollfies, and i can’t even now recall all the ones he had, but he would let my ‘child vampire’ character9and me! since i was playing said charrie) play with them. *LOL* and was just plain fun to be around. ^__^

(he played my character’s ‘auntie’ F.Y.I. and for halloween, he came as Jareth. too cool!) good luck with Frank!