There’s no really good David Bowie morph out there for us digital art amateurs. Sure, there’s a free Jareth preset available for Michael 4 using Morphs++, but it kinda looks like Rod Stewart. So I decided to make my own [David Bowie, not Rod Stewart]. I went for a likeness from the Ziggy Stardust era, and, after a few hours with some free, redistributable morphs by Die Trying, as well as strategic use of D-Forms in Daz Studio, I achieved maybe an 80% likeness using the Genesis figure.

END_OF_DOCUMENT_TOKEN_TO_BE_REPLACED

Today I practiced using Sculptris on my base figure, Genesis 2 Female. A day’s work generated a head morph and a full-body morph which, together, create Yelizaveta, the character below. I did the major work on the head morph in Sculptris, then refined it in Daz Studio with Die Trying’s 182 Morphs for G2F. I did the body morph entirely in Daz Studio with D-Formers and refinement with Die Trying’s 182 Morphs for G2F.

END_OF_DOCUMENT_TOKEN_TO_BE_REPLACED

I bought a tutorial by Winterbrose on morphing G2F with Sculptris, a free program from Pixologic, makers of the more powerful [and more expensive] ZBrush. The tutorial, despite some atrocious spelling errors that could have been easily caught with a spell check, provides the absolute basics necessary to work in the program and begin creating morphs; since I prefer written instructions, which allow me to go at my own pace, over video instructions, I am satisfied with my purchase. Already I see that it will allow me to overcome my hesitation and start experimenting.

Being relatively skilled with the D-Formers available in Daz Studio at this point, I think that I will not require a steep learning curve for Sculptris. I need only acclimate myself to the new layout and features; the principles of digital sculpting remain the same. I look forward to Sculptris’ ability to manipulate mesh on a finer level than I can achieve with D-Formers; I can then achieve more detailed and sophisticated results.

I’ve already decided the types of morphs I would like to create: a diverse range of body types and sizes not covered by existing commercial or free offerings. For example:

This entry was originally posted at http://modernwizard.dreamwidth.org/1692125.html. You can comment here, but I’d prefer it if you’d comment on my DW using OpenID.

Below is a quick render of Pinin’s default Satyress on left and one on the right with some of my custom body morphs and scaling. [Pay no attention to her unrealistic lack of body hair.] Much to my surprise, arm poses for Genesis [Body Talk Arms by katfeete in this case] work pretty well on her. I see that I need to make some more face morphs, especially to change the distinctive angular shape of the default’s head.

Yes! I created a sitting morph for Neftis’ Lady de Lioncourt Dress for G2F. I love this Gothy, neo-Rococo dress, but its inability to sit realistically has prevented me from using it.

After grumbling in quiet frustration for several months because I thought my skills were not equal to the task of making the dress sit, I finally decided to attempt the creation of a sitting morph. And I succeeded!

I made the morph entirely in Daz with D-Forms because that’s the method of modeling with which I feel most comfortable. I even minimized distortion of the bat ornaments all over the skirt. Go me! I’m amazing!

Jareth cheers in happiness below. END_OF_DOCUMENT_TOKEN_TO_BE_REPLACED

Here’s my custom “The Girl” character, Guerdon, as she stands tonight [not finished]. I Made her custom body shape [longer legs, smaller hands, longer neck, bigger feet] with “The Girl” base package, no extra morphs. Her homely, pointy face is also entirely an original product of several tedious hours with D-Forms, although I did use “The Girl” morph pack to create her expression of fierce concentration. Corset, shorts, boots and arm warmer from Glorious Goth. Streamer sleeves from The Dress. Hat from The Dress Headpiece. Shoulder pads from Planet Vixens Toxic II freebie. The skin texture is my work, and it incorporates seamless skin tiles by kabuki-chan at Renderosity and PSP 7 Stitches brushes by slshimerdla at Renderosity as well.

Anyway, she’s a well-disciplined member of the Goblin Royal Guard who has been trained since she was a toddler to protect the life of the Goblin Queen. Highly skilled and unquestioningly devoted, she knows the seven defensive arts of the Lower Orders and the eight tongues of the Roundaway world, making her equally talented in warcraft or espionage.

She was the one who intercepted the Elvish assassin who tried to kill the Queen during last year’s Festival of Worms. For this feat of selfless bravery, she suffered a disfiguring amputation of her eyebrows, sheared off by the vengeful assassin before he expired, choked to death by Guerdon’s hat streamer. The assassin intended to shame Guerdon by removing from her the most prized features of goblin physiognomy: their thick, swooping, expressive eyebrows. [Elves often take goblin eyebrows like scalps in battle, and goblin soldiers have been known to kill themselves before submitting to such dishonor.] Guerdon, though, was not to be daunted, and she had stitches tattooed in place of her brows. This is how she came to be known as Guerdon the Bald-Faced, in reference to her eyebrowlessness, as well as her general courage. 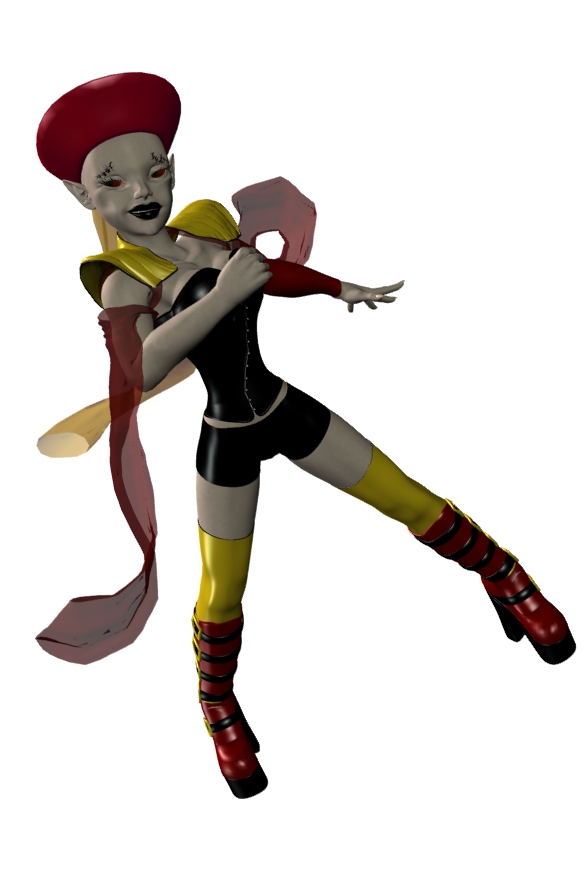