Once upon a time, I fell in love with Boston’s Chinatown. Devoted to its yummy, cheap restaurants and fascinating import shops, I decided to learn more about one of the city’s most distinctive neighborhoods. I began to search the library and the Web for information on the history of Chinese immigrants in Boston and unearthed a much cooler story than I ever could have hoped.

I learned that the history of Chinatown stretches back for centuries, despite Chinatown’s young age. While Chinatown has been around only since 1870, Chinese people [mainly young male laborers] came here much earlier. Trade routes linked Boston and Canton, China as early as the 1780s. The ships originating in China carried, obviously, Chinese crew members, so young Chinese sailors weren’t an uncommon sight on the wharves of Boston.

The Boston-Canton trade boomed in the latter part of the 18th century, but left few durable traces on the city. Though they were intimately involved with the city’s economy, the Chinese sailors didn’t stay here for very long [months at the most], so they didn’t really leave a mark. But one young man did….

In the Central Burying Ground in Boston Common stands an unusually large and ornate gravestone. This is what it says:

Here lies Interr’d the Body
of CHOW MANDERIEN
a Native of China,
Aged 19 Years: whofe death
was occasioned on the 11. Sep.
1798 by a fall from the Maft head
of the Ship Mac of Bofton.
This Stone is erected to his Memory
by his affectionate Mafter
JOHN BOIT Jun.

Besides the names and dates contained in the epitaph, this stone actually tells you a lot about Chow and his life. Here’s what I assume about him and why:

1. Chow was from Guangzhou, China. Also known as Canton [see above], this was the first and major city with which Boston sailors established trade relationships. Given the limits of local travel in that period, Chow probably was born and raised in Guangzhou or just outside.

2. Chow’s surname was not “Manderien.” “Manderien,” or “Mandarin,” is an old-fashioned generic adjective meaning “Chinese person.” The Englishmen had no idea how to pronounce his last name, so they just called him “Chow the Mandarin.” His true last name is lost to history.

3. Captain Boit valued Chow as a good servant. I’m not saying this just because of the phrase “affectionate Mafter.” I’m saying this because, when you think about it, Chow was pretty insignificant in most Bostonians’ eyes back then. He didn’t live there; he didn’t speak the language; he probably didn’t follow Christianity; he was just a foreign worker that they saw sporadically. Wealthier, white, English-speaking, Christian people probably looked down on him, if they looked at him at all. But Boit’s attitude was different. He erected a large stone, full of praise and Puritanical, Christian imagery, for a comparatively insignificant, non-English, non-Christian guy. He liked Chow.

4. Chow was working on the Mac as a favor for one of Captain Boit’s friends. I’ve checked, and Boit never captained a boat called the Mac. So I think Boit saw that the Mac needed some work done on it and offered the services of one of his most capable crew, Chow.

5. Chow died by drowning. Okay, a bit of poetic license here. He could have fallen from the crow’s nest to the decks, received internal injuries, then died as a result. But, in a more deliciously ironic twist, he could have plummeted from the rigging into the very sea that gave him his livelihood and, since swimming was not necessarily a well-known skill among sailors, drowned.

Okay, okay, what does this have to do with Jennifer and (un)real life? Well, first, Jennifer and I hit the Central Burying Ground, where Chow’s tombstone is, last Saturday. We found his stone, and I took gazillions of pictures, three of which are at the end of the thread.

As for (un)real life, the story of Chow “Manderien” stuck with me when I was researching various Boston neighborhoods to base vampire clans out of. I took the idea of a young, dead Chinese sailor who has been around for 200+ years… And thus was born the character of Bang Chow, known to the vamp world as the leader of the Hun, to Anneka as “Bang-shi-fu,” to Will as “Chow Bang Mandarin or something” and to Baozha as “Dad” [or “Chow,” if she really wants to piss him off]. 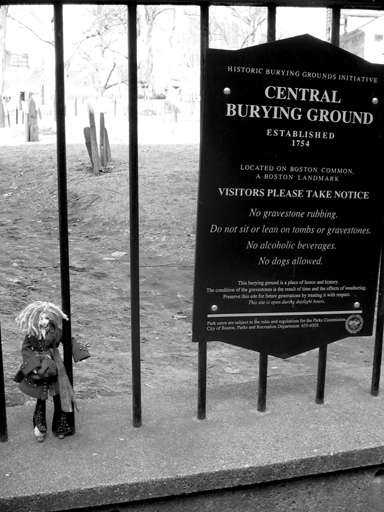 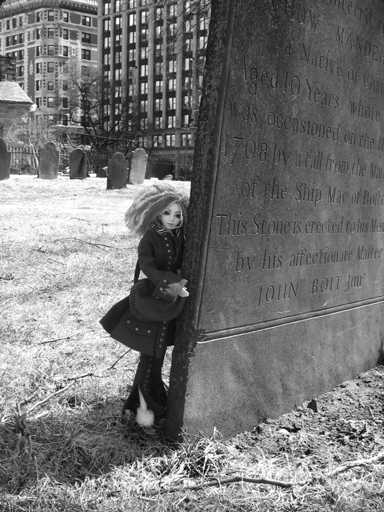 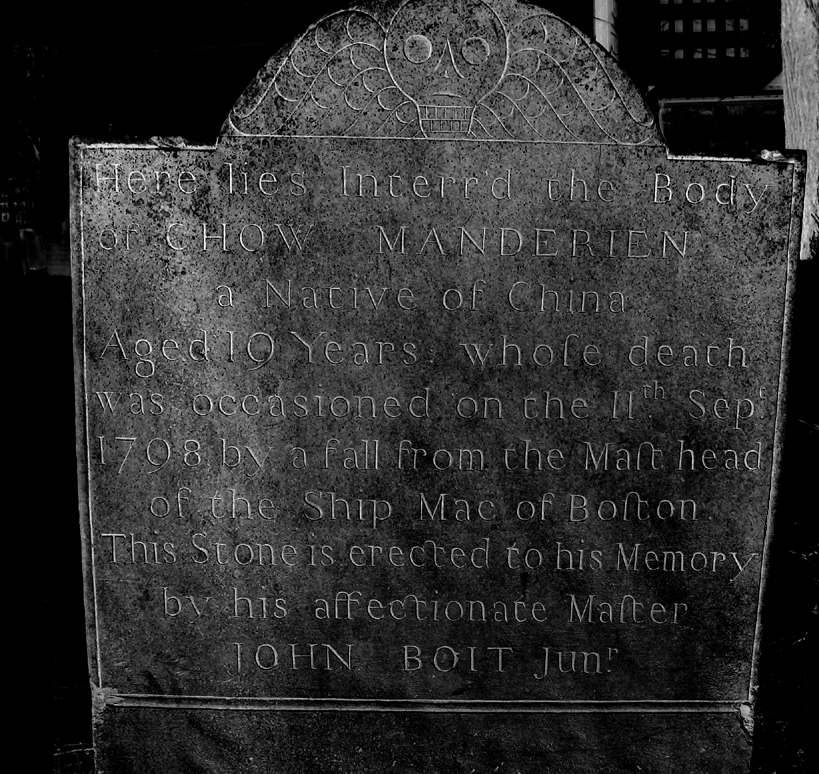 I like how you’re integrating real-world elements into the mythology of (un)real life.

Thanks. I fixed the typo!