Frank's in pieces all over my desk and bed right now because finally, after a wait of over a year, I finally have a bulkier, larger set of double-jointed arms, more in proportion with his body, than the defaults than came with the Doll More Model Doll girl body. Yes, the TwigLimbs arms have arrived, and I'm pleased with them.

has balanced an intimate knowledge of musculature and solidity with a pleasingly realistic style. Pictures below.

An hour with the hair dryer on high [half an hour for each hand] produced these results for Frank's new TwigLimbs hand and Will's left hand. To change the position of fingers, I placed the offending fingers right against the dryer nozzle and left them there for about 30 seconds. The resin then grew pliable, Soom's more quickly than the TwigLimbs, probably because the TwigLimbs are denser. I then removed the digits from the heat and pushed them into the position that I wanted, using medium hard pressure. I then held the hand in its new position until it cooled. I repeated the process several times, pushing the fingers toward their final position in stages because I did not want to risk overheating the fingers and melting them or pushing too hard and breaking.

In the case of Frank's TwigLimbs, twigling made a beautifully sculpted and accurate set of hands for her limbs, but I disliked the hyperflexion of the left fingers and the crumpled-up pinky. I reformed the fingers into a more relaxed, less tense posture. Compare the modded version on the left to the unmodded version on the right. The angle between the thumb and the first finger is also smaller. 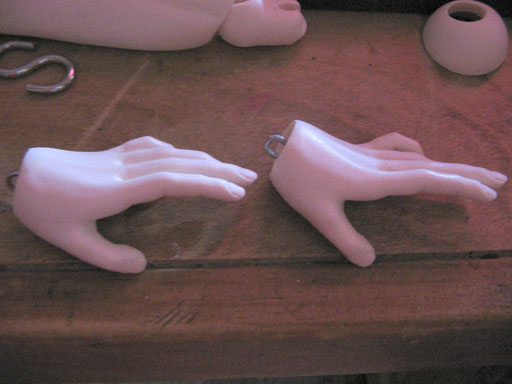 No comparison pictures for Will, just an illustration below of what his newly curved fingers can do. Before he couldn't even hold a Tarot card, but now he grasps my tweezers without dropping them. I may press his thumb and forefinger closer together so he can hold smaller objects. 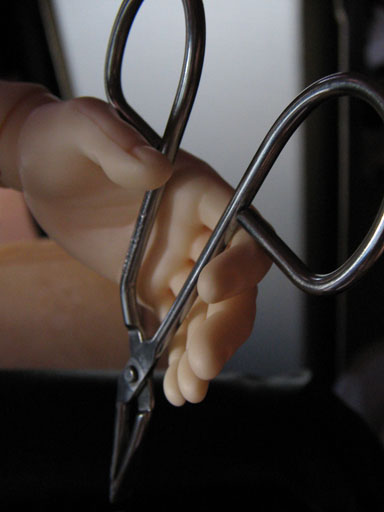 I really need to get some more elastic to help restring Frank's arms and also some wire so I can stiffen Will's elbow joints and really make him cross his arms and touch his face without support.

Surgeon: “Scissors.”
Underling: “Will these do?”

Very good! I’m glad you are able to mold them into what you want – hopefully pictures soon of the restrung Frank?

Did you notice any color change to the resin? I’m interested in doing this to Asphodel’s spare pair of Narae hands (I ordered an extra pair of Narin hands for her, because I dislike the default ‘flat’ Narae hand), but she’s snow white and I’m a bit worried about discoloring the French resin (since heat can hasten yellowing.)

The hand turned out really nicely!