Today I finally did something constructive with dolls besides purchase them. In order to articulate my Girls of Many Lands doll #3, I mounted her bust on a Jakks Pacific Juku Couture body, which, being 9", was just the right size. As a result, my GOML, now named Isabeau, is articulated at wrists, ankles, knees, waist and neck, a great improvement from her earlier statuesque state. Her outfit obscures most of her articulation, but you can see her striking a pose below. Previous adventures in articulating GOMLs are here, and here..

All I know about Isabeau is that she is a member of the Colonials, the oldest vampire clan in New England. She is probably one of those people who died young, but acts much older than her death age because she has had years in which to mature. She strikes me as less of a girl and more of a small woman. 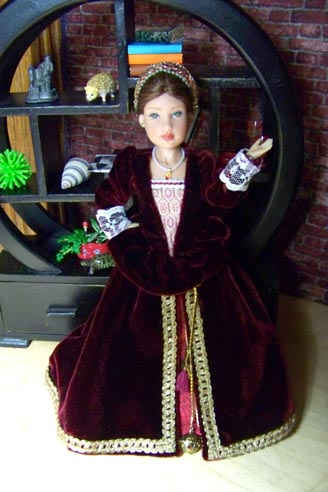