Back about a decade or so ago, I lived in an apartment on the third floor of a house. The landlord collected stuff. I got the innards of an old record player, as well as some vacuum tubes, from him. These, along with a circuit board from a calculator, as well as the halves of some plastic Easter eggs, some ball-headed pins, and some pipe cleaners, became a 1:6 scale Fiendish Device.

I originally thought I’d use it as a piece of equipment for my Frankenstein-like scientist Janet. However, the Device took up too much desk space to be a truly usable background element. Also it was really heavy, so I eventually ditched it before moving.

I’ve always missed the Fiendish Device. Sadly, though, the only record I have of it survives in this small photo of crappy quality in which Will, dressed up as Frank in prep for a midnight showing of RHPS, pretends it’s a sonic transducer.

I should remake it. It was the best vaguely ominous, sort of scientific-looking thing ever. 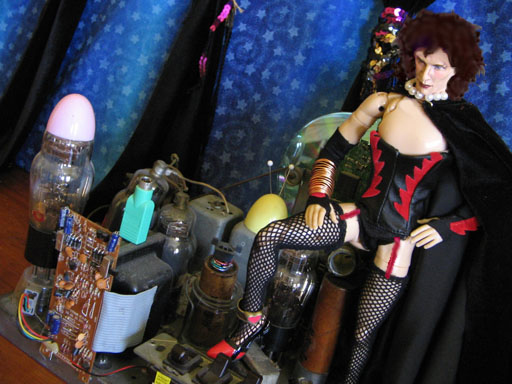