I went to @natalunasans’ house for a long weekend, coming back today. My DW dolls met her DW dolls and had several photostories. I also helped her sort some of her massive amounts of 1:6 scale stuff and chose those items that I wanted for myself. 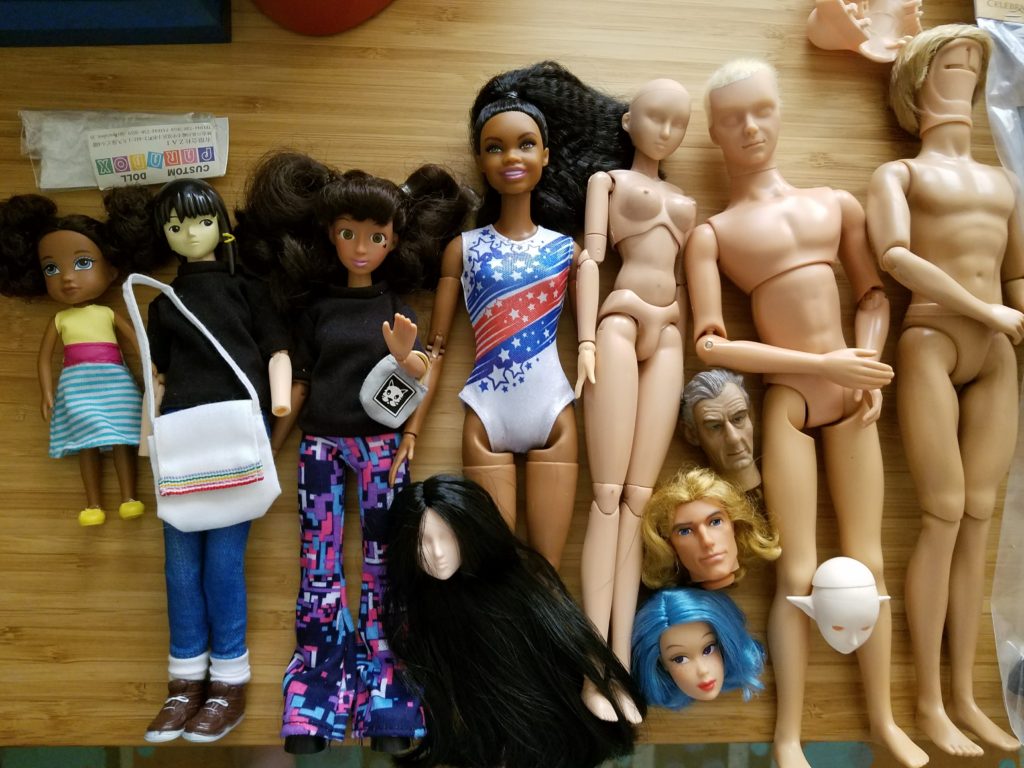 I’ve got plans for a lot of this stuff, mostly related to my current DW obsession. The brunette Juku Couture/Bratz is the [Little] Witch, a childhood incarnation of the Master’s. The Flavas Liam will be spliced with the Avastars legs to make Batshit Harry, another version of the Master, who appears in one of my fanfics. The Modern Circle Melody will be repainted [and probably rehaired] as Galleia of Atlantis, another DW character, who will eventually appear in one of my fanfics.

I’m also excited about anything that looks appropriate for a 1:6 scale kid. I have a very small amount of them, but I decided to add more to my populations. They’re good for some variety in background scenes. I’m also pleased to have some spare bodies, including some without breasts. [Most of my spare bodies are adults in pale or medium pink with breasts.]

While I was down there, I also hit Target, which does not exist in Vermont. I spent $75.00 for 1:6 scale stuff, something I almost never do when shopping in person. Items below.

Biology set was made for 18″ dolls, but sometimes accessories for the Our Generation line are more 1:6 scale than 1:4 scale. The two 8″ kids with inset eyes are obviously fulfilling my need for more 1:6 scale kids. Clothing set was purchased because I was on a kick for acquiring 1:6 scale glasses. Fidget cube will be a Fiendish Device. The Fresh Girls Indigo, the most expensive at $26.00, has the same head sculpt as Fresh Dolls Mia, which I used for Bill. This one just has wretchedly printed eyes and a darker brown skintone. I got rid of the sandals and the blue skirt, then mangled the zebra/yellow dress when trying to turn it into a skirt, so basically I paid $26.00 for microbraids. I’m okay with that. Threw away Elsa eraser, as it was not salavageable on closer inspection.