Armeleia and I have created a new way of collaborating: telecustomizing! From 9:30 PM on February 5th to 1:30 AM on February 6th, we logged into Yahoo chat to do Jareth’s faceup together. Every 15 to 30 minutes, Armeleia pinged me to update me. [Yahoo chat has a BUZZ!!! feature that sounds like a doorbell and makes the whole window jounce.] I got pictures after his base coat, his eyelashes/liner, his eyebrows, his lips and the shading. [Pics at various stages below the cut now.] 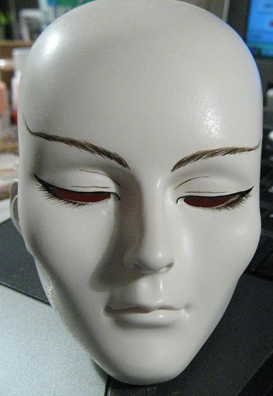 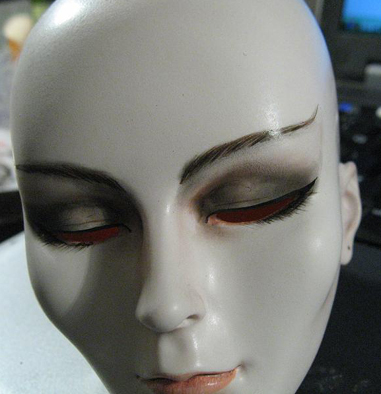 At each stage, I either okayed the current status or suggested changes. Since I had discussed with her in previous chats what the faceup should look like, we both had a good idea of what she was doing. I was just monitoring to make sure that the execution went as planned.

I haven’t done anything for Jareth. I commissioned his outfit, his wig, his mods and even his faceup. In the beginning, I wanted to do Jareth’s faceup myself so that I could do something to customize him and make him mine. But I gave the job to Armeleia because she, much more experienced than I am, had the finesse required to make the real object live up to my imagined design.

When this project started, I worried that I would feel little attachment to Jareth, since I am not sewing for him, hacking him up or otherwise physically taking part in his customization. As I went through the various steps of the commissions – getting quotes, sending patterns or example photos, commenting on updates – I realized that I am indeed customizing him, just at one remove.

I remain forever indebted to the many talented people who helped me out with the Jareth project, and the fact that others executed my ideas doesn’t make the finished doll any less mine. I thought him up in the first place [not Jareth the Goblin King, but my personal character]; I dictated his doll form and the raw materials for the commissions; I designed the commissions and approved them at every step. He’s mine. I made ‘im.