My concept of Will’s physique has always been closer to that of my 1:3 Jareth doll, rather than the ridiculously muscular soldier’s body he’s had for years. Unfortunately, the custom head that I use for Will won’t fit on any of the skinny male bodies…until now. Tonight, after a long silence, I broke out the Dremel and my drawer of bodies in an attempt to transfer the brawny neck assembly from a Dragon male body to the scrawny slender Obitsu male body.  In order to balance out the thicker neck, I imported Will’s original muscular arms [so he doesn’t have twig-like upper limbs]. I have yet to ream out the torso to allow for neck poseability, but you can see a mock-up of how I want Will to look below.

I’m swapping his body not just because I envision Will as skinny, almost to the point of weakness. I’m also narrowing his body because that way he can fit in all the cool clothes for female fashion dolls [his pants are My Scene] that he couldn’t before because he was too wide. Only clothes for fem figs come close to achieving the proper look for Will. 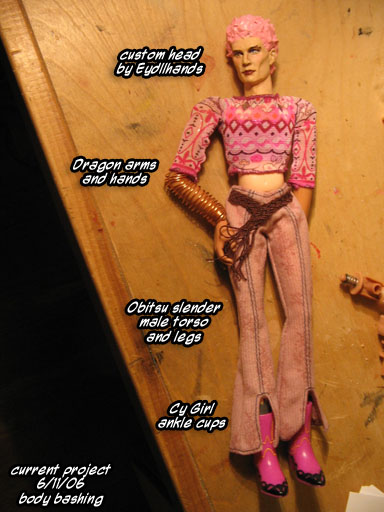