Someone over at DOA provided pictures of Sabik’s head on a 70cm Dollshe boy body, concluding that the results were a scary failure. I disagree. The head looks slightly too large, but that’s not a problem, for a few reasons…

First of all, a Sabik head on a Dollshe body is about 7 heads high. The ideally proportioned male body is 8 heads high, but real people show great variation, so it is possible that a male could be 7 heads high.

Finally, the largeness of Sabik’s head can be mitigated with creative costuming and posing. I’ve already had experience with a big-headed doll, Frank, a Yukinojo head on a Bella Auden body, and I’ve learned that certain angles [de-emphasizing the poofy hair] and certain outfits [balloon sleeves to add bulk to his scrawny arms] compensate well for the size difference between his head and the rest of him.  If a Sabik/Dollshe hybrid were clothed and photographed with a modicum of skill, I believe that it would look great.

All of this is, of course, a neat way of convincing myself that a Sabik head would work on Jareth’s body so I could make a Will doll. Picture below. 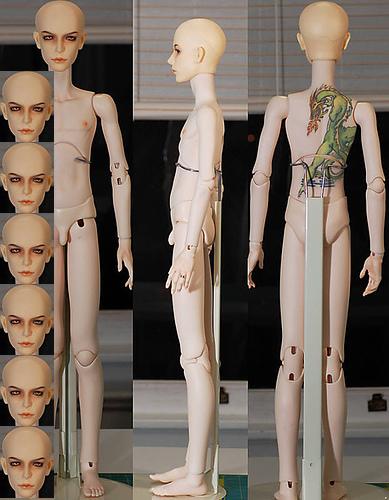 I agree — with the right clothes (and some blushing to overcome the resin mismatch) this could work!

I’m still immersed in the often-balloon-headed world of 1:6 vinyl–the head in your image head looks fine-to-undersize by those standards (and, that’s without looking over into the Blythe/Pullip proportion wing of the hobby)

I think it looks fine — in fact, I generally think that Dollshe heads run a little small (Bermann is just right, Hound is a little peanutty, and Saint and Bernard, while I love the sculpts, are just TINY on those tall bodies, especially next to other dolls!)

Dolls aren’t meant to have EXACTLY human proportions anyway, so I think it looks quite good — and far better than Sabik’s rather spidery and odd body proportions in general.