She’s the adopted daughter of the leader of the Hun, the vampires of Chinatown. From most to least formal, her adoptive father’s names go like this:

Bang-shi-fu=Lord Bang [what he wants people to call him]
Bang Chow=his full name [last, first]
Chow Mandarin=Chow the Chinaman [what his fellow sailors, who were Englishmen, called him]
Chow=his first name [used disrespectfully by Baozha, Will and anyone who wants to piss him off]

Anyway, since I just refer to all characters by their first names, Baozha is Chow’s kid.

This is my first all-around accurate iClone render of an LHF character. [Previous ones of Will were experimental and thus didn’t count. I also did Janet earlier, but she doesn’t have appropriate hair.] Everything about Baozha’s build, features and even clothing is accurate to her character. Her outfit represents my earliest pathetic attempts at customized clothing design. For example, her pants were made with a downloaded texture, originally in green and opaque, which I tweaked to look like bleached denim. Her shirt is an application of a fantasy industrial scene jpg with a clear reflection + yellow glow so it looks like it’s made out of plastic. [I foresee lots of shiny, slick and plasticky clothes for my characters.] As you can see, her face is going to freeze in that expression… 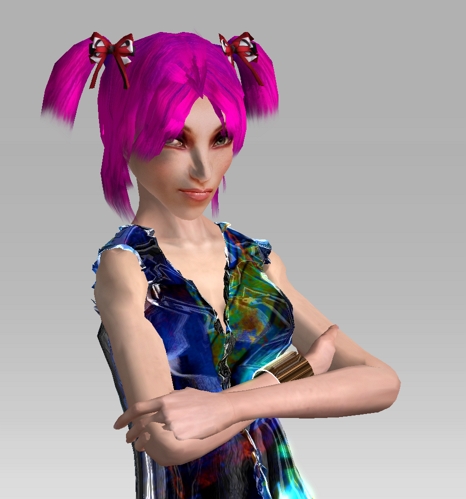 Aside from an issue with her hand and her left eye (left from my pov anyhow) she looks good.