If you want to see a show driven by the power of all-around masterful performances married to a strong, character-driven storyline, check out American Gothic, now available at Hulu. It is an ensemble story of sweet Southern corruption in which forces both good and evil fight for control of a young boy’s soul.

On the good side there’s recent Yankee transplant Matt Crower, played with quiet self-possession by Jake Weber, who is such a dry and gentle character in Medium, haunted by his wife and child’s death in a DWI accident he caused. There’s also Gail Emory, investigative reporter, played by Paige Turco with brooding dignity reminiscent of Yancy Butler at her best, returning to town to look into her parents’ suspicious deaths 20 years ago. The boy himself, Caleb, is played by 10-year-old Lucas Black in a startingly intense performance [I love those little, low, dark eyebrows!] that’s pretty realistic for a TV depiction of a 10-year-old boy.

On the evil side there’s schoolteacher Serena Coombes, played with sexy, slimy relish by Brenda Bakke. And there’s Lucas Buck, played by Gary Cole, who is my latest favorite actor. I first noticed him as the Boss From Hell in Office Space, Lumberg, but here, in the starring role, he really gets to show how hellish he can be. As the classic devil, Buck’s character operates on fear, doing good things for people, then asking them to pay him back, or else they meet gory demises. He also has an unnerving habit of popping up whenever someone is thinking about disobeying him. He creates a black hole of influence that it seems impossible to escape from.

The cheesy special effects and fast-motion weather hammer this point home, but Cole’s eternally genial front really makes the character work. Even when he’s threatening you, Buck does so in a gentlemanly way, which makes his cruelty even more effective and insidious. Cole plays Buck with a certain broadness that comes from his comedic experience, but he also projects such charisma and power that Buck always remains a magnetic and menacing presence. It’s a magnificent performance.

Not a perfect show, by any means, American Gothic suffers from a dearth of fully fleshed female characters. While all of the male characters have multiple dimensions, the women remain kinda flat. Gail’s the Plucky Gumshoe archetype, and Merlyn, Caleb’s dead sister, is the Pure Moral Compass archetype. Tertiary characters are also problematic. In Damned If You Don’t, for example, Carter Bowen and family do a favor for Sheriff Buck, which entails letting an escaped con into their house. Said con goes after 15-year-old Poppy Bowen. Wife Etta Bowen ends up dead. I strongly objected to the way that Poppy was portrayed not by the con, but by the SHOW itself, as a Lolita-licious sex object. 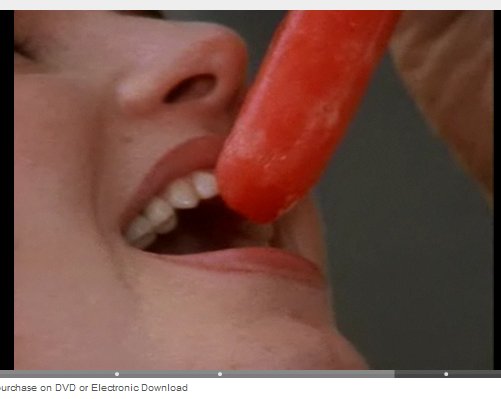 Camera lingers in slow-mo here on Popsicle held by ex-con.

For another example, camera panned from her feet, up her legs, to her chest and head as she slowly entered the swimming hole, objectifying her in a way that, say, Gail is never objectified. 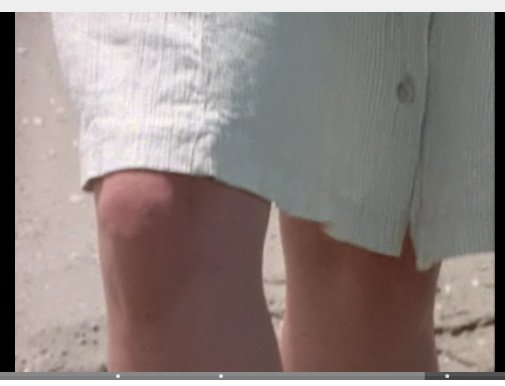 You should see how interested the camera gets when she starts hiking up her dress so she doesn’t get it wet.

In the end of the ep, it is revealed that it’s Etta that the con is after. So the pornographication of Poppy was…what? A red herring? As far as I’m concerned, it was gratuitous and deeply disturbing because everyone was out to objectify her, from Buck, who wanted to give her a job in his office and “take her under his wing,” to the con, who was feeling her up, to the very camera angles themselves. Despite obviously having sexual exploitation as its theme, the ep refused to examine the subject and instead just cranked up Poppy’s sexiness, thus making the viewer complicit in Buck and the con’s attacks on Poppy. No irony or commentary here either — we’re just expected to agree that Poppy is a hot little slut who brought misfortune to the family by being too damn sexy.

I only missed one episode of American Gothic when it was new, although I don’t remember a lot of the stories. I do remember deciding that Sheriff Buck wasn’t evil as much as he was simply intent on protecting his town, whatever his actual relationship to the town may have truly been…and…erm…he may have gone about that protection in evil ways.

I used to watch this show on TV and I loved it!! I’d like to get it on DVD at some point. And I was really loving Gary Cole at that point too… he’s hot, but then he was in the Brady Bunch:(

You should see what Lucas Black looks like now!!