Following up on my previous comments about the Divine Screw, I have an example of the reinvention of this theme in Tanith Lee’s sprawling series Tales of the Flat Eath [good plot summaries and overview here]. In one of the major, multi-book storylines, the male divine, Azhrarn, the Lord of Wickedness and most powerful of all the demons who are de facto rules of earth, gets his freak on with Dunizel, human priestess. Their daughter, Sovaz/Soveh/Ahzriaz, goes through a whole book, Delirium’s Mistress, searching for herself. She goes from Sleeping Beauty to death-dealing vigilante to despotic goddess queen to prisoner under the sea to wise innocent child to dueler with angels to mortal sage. She ends up, satisfyingly enough, bargaining with Death for a mortal life, which she receives.

Azhrarn, despite being the personification of Wickedness and therefore selfish, sadistic, nonchalant, cruel, supercilious and generally nasty, nevertheless comes across as very human in his need for an audience [=humans to torture], his pride, his tenderness for those he loves, his great capacities for grief and desire for vengeance after Dunizel is stoned to death.

Finally, their daughter, who goes through a Tarot-card-like cycle of birth, death, rebirth and self-discovery, proves to be the richest and most interesting character. She achieves the full humanity and compassion that both her parents were attracted to, which they both yearned for, but could not attain because they were still somehow detached. 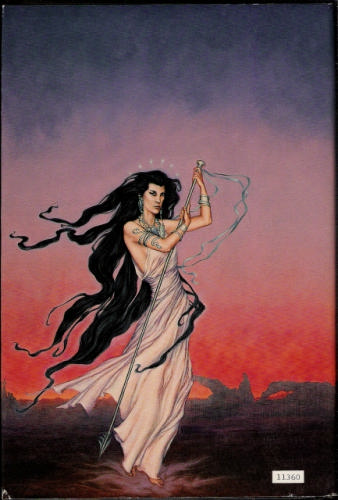 Azhrarn and Dunizel’s daughter, clearly at the point in her life when she was a beautiful, but cruel, goddess on earth, as taken from the back cover of the omnibus edition of Tales of the Flat Earth

Furthermore, Lee devotes time to the relationship between Azhrarn and Dunizel, in which she explores what I referred to earlier as “the balance between wonder and terror.” We see each of them aggressively seducing each other by being quintessentially themselves. Azhrarn is sadistic [turns into wolf, bites off Dunizel’s arm] and Dunizel is masochistic [falls in love with wolf, sacrifices self to him to save city], and they each find in the other someone who heightens and concentrates their very selves. Eventually Azhrarn cracks under Dunizel’s submission such that he becomes the sub and she becomes the domme. [In some of the best conversations, he tries to be broody and threatening as he says, “Look what you have reduced me to! I am lovelorn!” Meanwhile, she points out, “I don’t buy it. It’s CONSENSUAL enslavement.”] It’s all very kinky and a bit sick and not a little tainted with stupid yin/yang essentialism, but the point is that it works as a piece of psychological insight to explain the ambivalence between people and divines.

What I’m trying to say here is this: Lee’s use of the Divine Screw trope is unusual. The male Divine ain’t the center; instead, it’s the female human mother and the halfbreed daughter. In fact, the women are so central to Lee’s Divine Screw that the product thereof is a daughter, something inconceivable [hah!] in most versions of the tale. Moreover, Lee just doesn’t change the sex of the Child of the Penis of Doom. Lee actually pays attention to all parties, father, mother and child, and gives them their due. Women with subjectivity! How revolutionary.