My fantastically fascinating essay about zombies in modern pop culture continues, trying to find out why we think zombies are so rockin’ awesome. Parts I and II looked at political parallels between us and zombies, while part III looked at the links between the administrative industry and zombiehood. None of these aforementioned theories about the prevalence of zombies are my original ideas, but I do have some speculation of my own about the origins of our collective zombiephilia.

This is my interpretation: Part of the reason we like zombies so much is that, as portrayed in modern pop media, they are extreme vampires. They are perfectly modern monsters in that they threaten humans at the essential seat of their humanity — the brain — thus updating the cannibalistic implications of the vampire for our current scientific state of knowledge.

To begin with, let’s establish the common modern portrayal of zombies. Almost all of the media examples enumerated in part I depict zombies with 3 key traits:

1. They are physically dead, but still animated. They are undead.

2. They feed on humans, most notably on braaaaaaaaainnnnns.

3. They are contagious. People turn into zombies either by catching a virus that the zombies carry or through zombie bites. 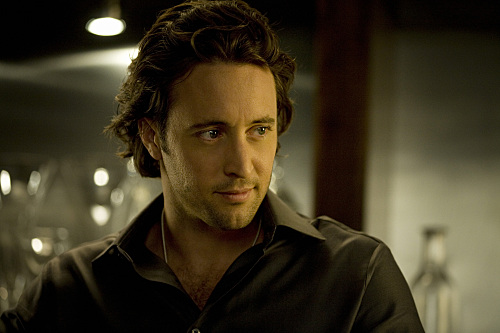 Mick St. John, modern pop vampire from TV show Moonlight [2007], looks pretty alive for a dead guy. How does he resemble a zombie?

2. Vampires feed on humans by drinking their blood, not brains. 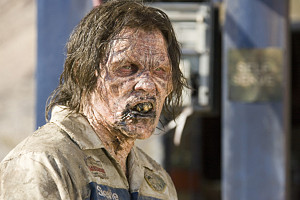 The modern pop zombies from Resident Evil: Extinction movie [2007] look more obviously dead than modern pop vampires, but they are, at base, the same kind of creature.