So I got a 12″ Character Options Martha Jones doll in a trade from corsetkitten today. She has a marvelously molded face with a welcoming, neutral expression, a simplified and realistic paint job and a passable likeness to Freema Agyeman. Actually, the doll has a longer, wider face with larger, less classically beautiful features than the person it’s supposed to represent. I think that only adds to her realism, however. Furthermore, her hands are small, proportionate and intricately sculpted in useful relaxed positions, including the character’s jewelry. I love her face and her hands.

I really hate the cheap, poorly constructed body, though. It completely lacks aesthetic appeal. The upper arms and upper thighs are not perfectly cylindrical, so any use of the swivel joints shows how the upper and lower parts of the limb do not perfectly mesh. Furthermore, the double-ganged knees and elbows have horrible notches at the tops and bottoms, making the bent limbs look unrealistic and hideous. In fact, I have no idea why the Dr. Who dolls have double-ganged limbs because, unlike other double-ganged limbs with better joint designs [e.g., Obitsu, CG, DML…heck, pretty much anything], the double joints actually add nothing to the poseability. You can’t see the nasty articulation under her clothes, but trust me…you don’t want to.

Anyway, may I now present the latest character in LHF? I don’t know who she is, but she’s certainly not Martha Jones or even Alicia Simms [who I had originally planned to enplasticate with this fig]. She isn’t even finished because she lacks Pink Hair of Awesomeness. However, she is quite adamant that her FQ [Fabulosity Quotient] is astronomical already!

She’s wearing a dress by Andrea, stockings from a BBI Goth Angel, shoes from a Mattel My Scene horror and a 1:1 stained glass earring dangling in her cleavage. Believe it or not — I actually spend quite a bit of time deciding how to dress my characters in the LHF style [whatever that is]. 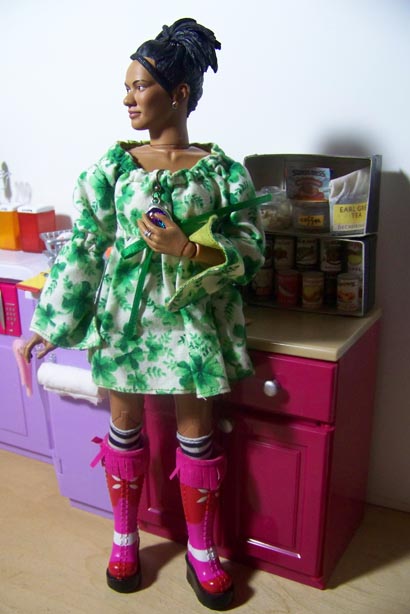 Wow!!! This is awesome!! I love this style! I wished I dressed like this!