…Just so I can create a wedge of a futuristic city with a library complex at the center of the scene. Behold the Library of Intellectum! It’s made of some pieces of the aforementioned Dystopia City Blocks, colored in nice bright pastels by me.

The Library of Intellectum occupies the whole block in the center of the picture. I don’t know very much about it yet, but I do know that the green building with the pointy dome is the earliest surviving library structure. It is easily 200 years old. When the city was small, it originally housed the entire library. Over the years, additions and other buildings have been erected. The large wedge-shaped building behind the green one is known as the Magenta Monstrosity. Still controversial, even though it was finished over 50 years ago, the Magenta Monstrosity excites revulsion because of its color and because it’s kind of out of scale with the rest of the smaller, older library buildings.

The Library of Intellectum fronts on one of the city’s parks, partly shown, but currently undeveloped. Intellectum Common still needs trees, paths, benches, trash cans and a sculpture garden. It has a long, interesting history that I haven’t made up yet.

Daz does have its strong points, namely in the rendering of peopleless scenes and beautifully constructed buildings. I’ll never again use it for people, though, no matter how diverse their body shapes, because they all end up posing unnaturally. Besides, I can’t touch them the way I do with my dolls. 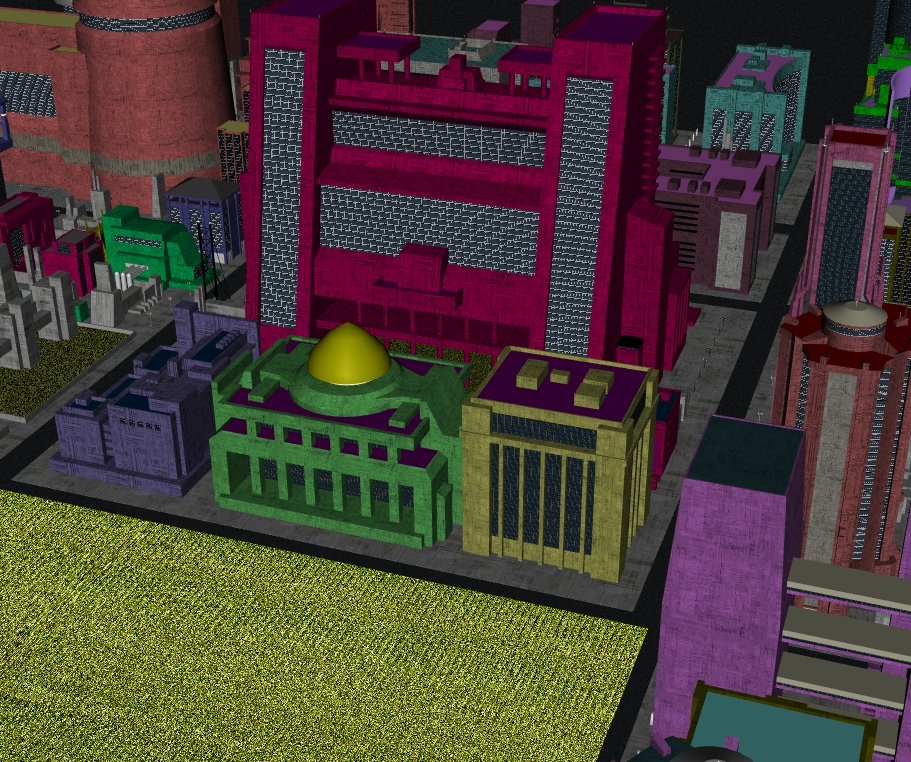 I like how the basic wear of the dystopian aspects still shows with the bright colors, while the whole decay aspect is wiped away by those colors. This is simply a city, with buildings that aren’t shiny and new, but are still happily maintained (OK, maybe there’s some grumbling from the people who maintain the Magenta Monstrosity, but I imagine most people actually connected with the place absolutely love it.)