The default shading colors for its 3-D digital human models make the people look Caucasian. Like this: 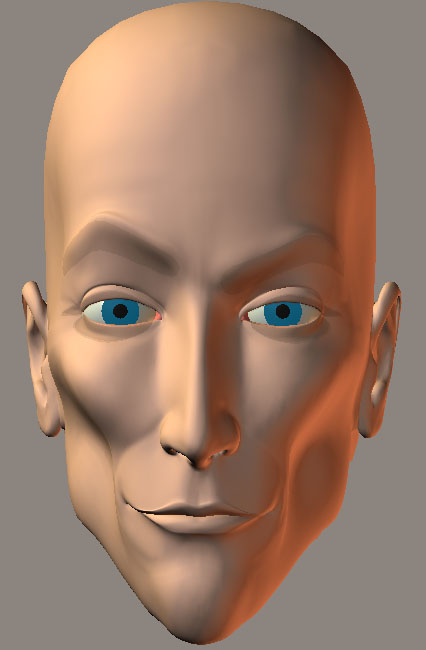 It's also really sexist. When you fire up the program, the default scene appears. It contains "Andy," a male figure that vaguely resembles a wooden jointed mannequin. You have to tinker with the preferences to open up the program on a blank scene. Why does Poser assume that the first thing you want to do with the program is play with a man? I suspect it was designed by men who envisioned themselves as the default human beings. >_>

Digital models in general are really sexist. If you go to the Daz3D site, retailers of Michael and Victoria, the most-used digital models of people in the Daz/Poser community, you will see on their welcome page a picture of Michael and Victoria. Michael has a full outfit, including shirt, jacket and pants, while Victoria isn't wearing any pants, for some mysterious reason. The gratuitous sexualization of female characters is so pervasive in the community that they've got a joking acronym for the most popular type of render [= "digitally generated picture"]: NVIATWAS. That's "Naked Vicky In A Temple With A Sword." >_>

Some really weird stuff happens in the Daz/Poser community around the models of digital people.

1. Michael comes with articulated and morphable genitalia, while Victoria doesn't. In fact, the only way to purchase equally detailed genitalia for Victoria requires patronizing a purveyor of Poser pornography.

3. I have never experienced an artistic community so rigidly devoted to binary gender assignments as the Daz/Poser community. In the 1:6 scale action figure community, for example, swaps between "male" and "female" headsculpts occur, and many people adapt "male" clothes to fit "female" bodies. In the BJD community, the premium placed on the androgynous aesthetic means that headsculpts can have pretty much whatever sex you want them to. There's quite a bit of modding of dolls' secondary sex characteristics and a significant minority of "cross-dressing" dolls. It's sometimes quite queer and therefore awesome!

You can make your digital people cross-dress, however, but it's not easy. You have to buy a program, separate from your Daz Studio or your Poser, specifically created for the purpose of crunching a selected carapace and reformulating it in a different size and shape. In good news, you'll have a wardrobe of clothes customized perfectly for your character. In bad news, you are paying to reinforce the Daz/Poser community's fanatical policing of the sex/gender "binary."

4. God forbid you want to put your digital person in an electric wheelchair. I've done some pretty detailed searching of Daz/Poser content available, and I've never seen one.

I believe he used “autofit,” but I don’t know the lingo.

And so, on a tangentially-related note, I will leave URLs for two blogs I found yesterday