While I was on Craigslist last night, posting my DVDs for sale, I made the mistake of searching for "barbie" and then "doll" in the sale section. I came across an AG Minis Groovy Room room box, used, but in great condition and well-furnished. Seller’s picture is below. 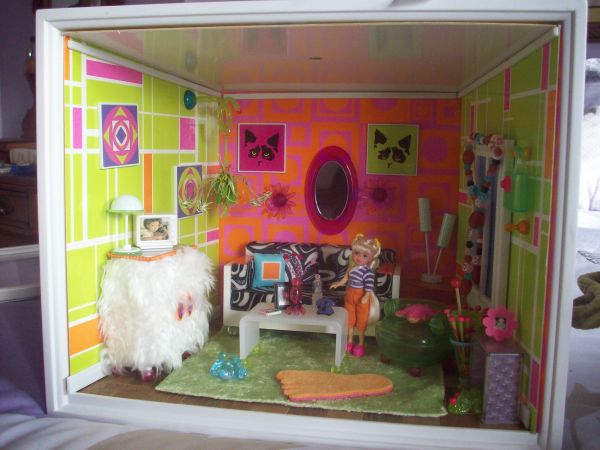 AG Minis refers to a line of room boxes, set pieces and accessories produced in the early 2000s by American Girl, by then a subsidiary of Mattel. Sets included living rooms, bedrooms, a diner, a shoe and purse store, a stable, a cabana, a patio, etc. Companion animals, including horses, dogs, cats and hamsters, were issued, but, much to my bafflement, AG never put out any dolls to go in the room boxes.

I’m not quite sure of the scale here, but it’s definitely smaller than 1:12, probably closer to 1:18. The Polly Pocket doll in the picture stands somewhere between 3 and 4 inches.

As I squint between the documentation at the link above and the seller’s picture of the Groovy Room, I can determine that my Groovy Room contains an Illuma-Room, a clear front dust cover, Groovy Decor set minus bead curtain, Stylin’ Seating Set, Stylin’ Art Set, Blooming Little Things and Funky Little Things. As far as I can tell, it’s a complete set except for a few negligible pieces and [sigh] the globe lantern from the Stylin’ Art Set. [Silver star tree from Funky Little Things included but not shown.] Not bad for $50.00, especially considering that the complete set sold for $178.00 when it was first issued. ^_^

As you can see, it’s an eye-assaulting extravaganza of meretriciousness and therefore awesome. In fact, I think there’s too much going on in there. Shocking, right? :p In order to make it tacky, but less painful, I need to do the following:

I’m thinking that this can be a dollhouse for Isabel’s dolls, who apparently are just as questionable in their tastes as she is. :p

So, anyway, because this room box looks like a rainbow threw up in it, my trip to Barre this weekend to pick it up is now billed as Operation Rainbow Barf.

This entry was originally posted at http://modernwizard.dreamwidth.org/1471888.html. You can comment here, but I’d prefer it if you’d comment on my DW using OpenID.