Back in my less discriminating days, I used to acquire stuff more easily that I thought looked great, but which I did not immediately have a use for. Now that I’m older, pickier and possessed of much less space, I have winnowed my collection of set pieces and accessories down to those that I can use in multiple situations. [Well, with the exception of my Shoezies shoe display rack — it’s so cool that I will write shoe stores into my photostories just so I can use it for its sole purpose!] Though I have drastically reduced my 1:6 scale stuff to the most practical and useful pieces, sometimes some stuff hangs around that I’m not sure what to do with.

Take this 1:6 scale cork scene, for example, with which Isabel is posing below. It’s a cluster of miniature, carved, wooden buildings in a glass case with black trim. 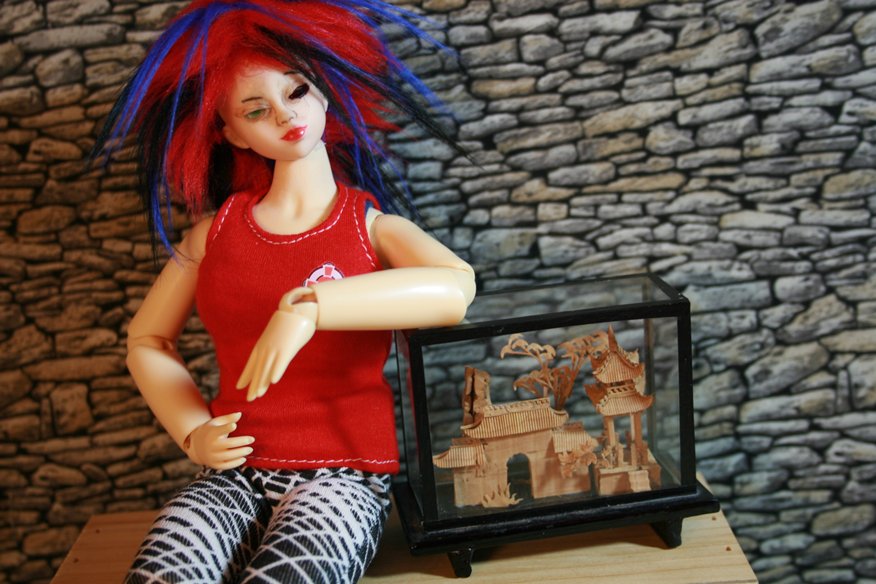 I picked it up in Chinatown about three or four years ago when I lived in the Boston metro area. I thought it would be a great addition to a room owned by Chow Bang, a Chinese immigrant and resident of Boston’s Chinatown neighborhood, who was a secondary character in Love Has Fangs. It did appear in the background of an episode or two, but has not been used since.

I’m not sure what to do with it. Part of me wants to keep it because I’ve never seen anything like it again and, plus, I might want to use it some day. The other part of me points out that, after its initial uses three or four years ago, it has remained in storage, and "some day" has not arrived.

This entry was originally posted at http://modernwizard.dreamwidth.org/1479029.html. You can comment here, but I’d prefer it if you’d comment on my DW using OpenID.