Over the past week or so, I’ve been customizing dolls for Isabel with the aim of creating as many articulated dolls for her as possible. Like me, she works quickly and rather messily, using a lot of hot glue and not worrying too much about matching skin tones. :p 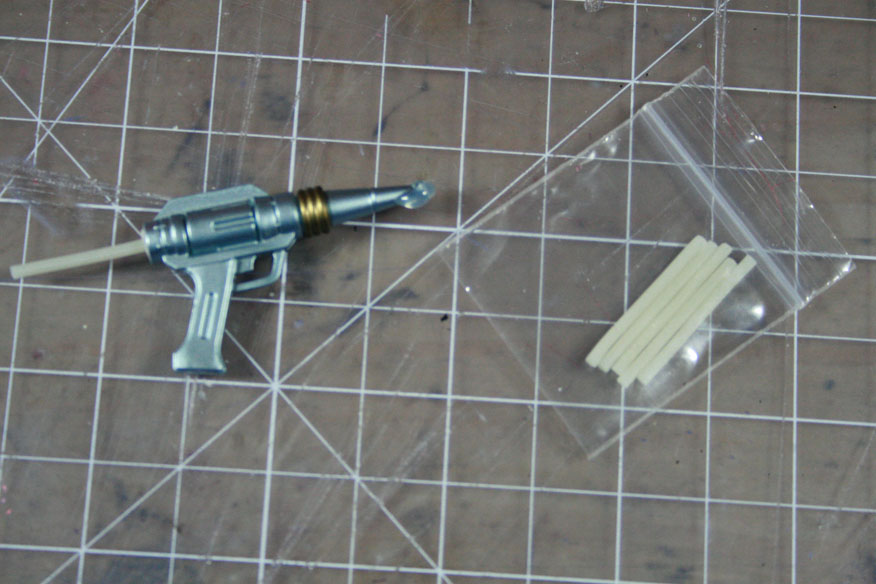 Tonight I made her a glue gun for the glue sticks that Deborah sculpted for me. I sawed the end off of Takara Cy Girl Aurora’s ray gun and drilled a hole in it wide enough to accept the sculpted glue stick, which I glued in with hot glue [of course!]. For realism, I added blobs of dried real hot glue at the nozzle of the gun. 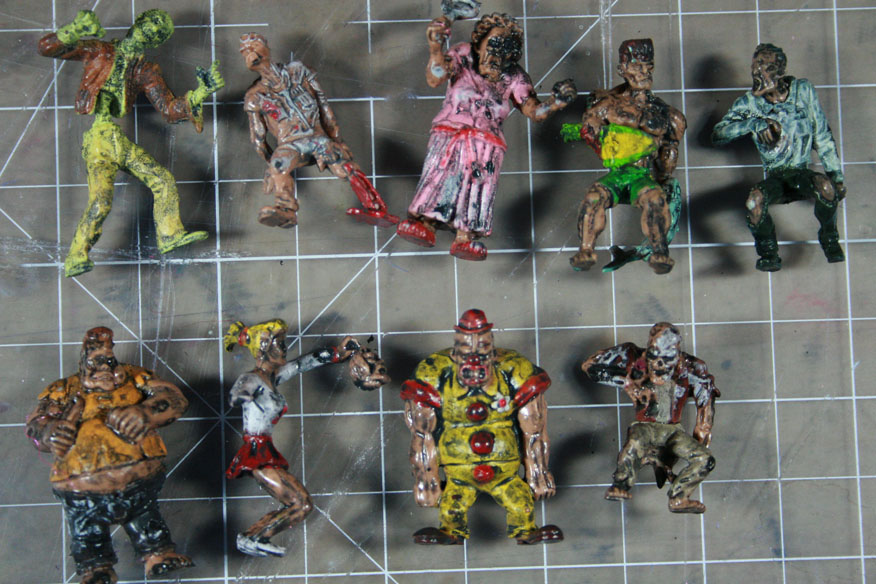 Here are some zombie dolls for my dolls, Theophany in particular. Priced at $5.00 a set, they are soft plastic figurines between 1 and 1.5 inches tall. Made by Zombie Planet, they would look much better with neater paint jobs, but I don’t care enough to repaint them all. They look zombie-like and gross, which is the effect I’m going for. 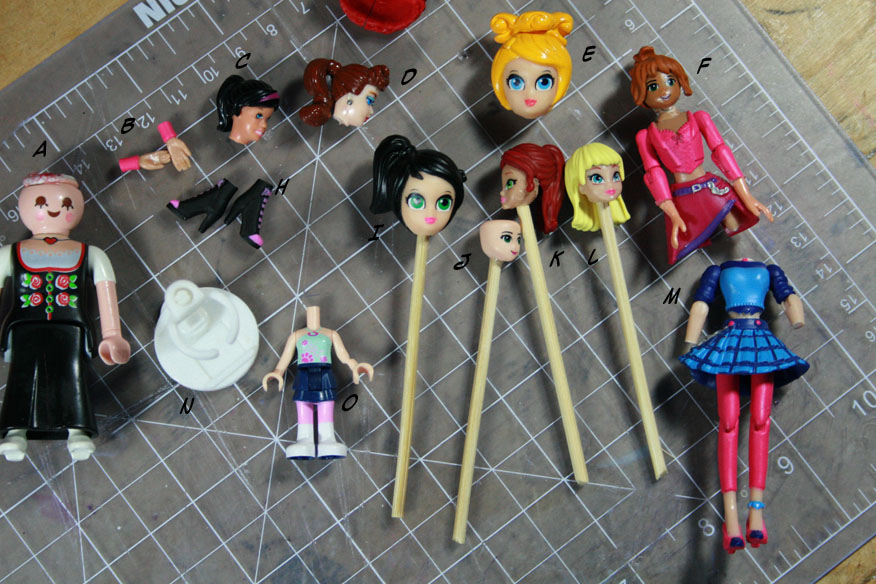 I have expended more effort on the contents of Isabel’s work table and shelves. Here are some of her pieces and  projects in progress:

A: Playmobil figure with hair removed and skull hole filled in with Aves Apoxie Sculpt.

G: [Whoops, I skipped that letter.]

I: Head from Zwinkies on a cut-down bamboo barbecue skewer. This and others are on sticks because Isabel needs to repaint and/or rehair them, and wedging heads on sticks, then storing them in a pencil container, keeps them neat. 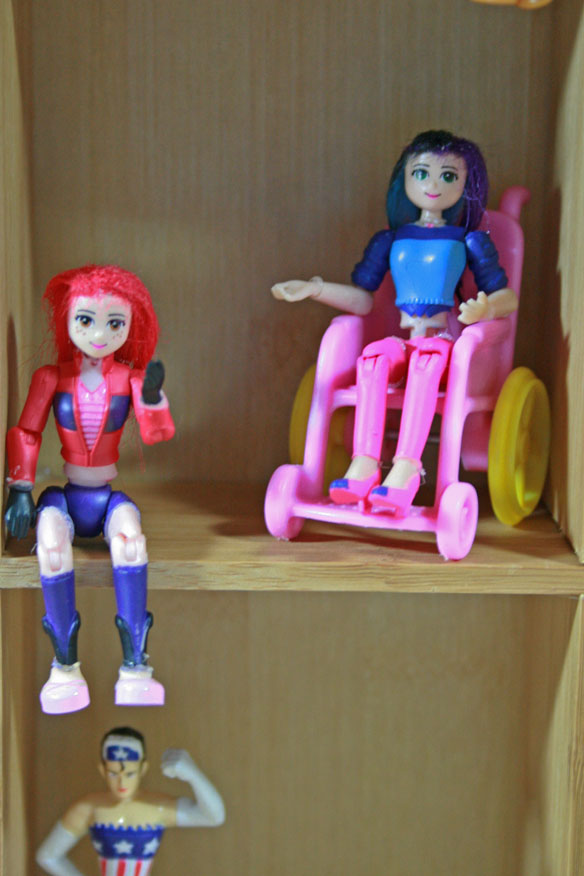 These two of Isabel’s dolls are Jakks Pacific Winx 3.75" action doll bodies with cut-down arms and legs. Heads are from Lego Friends, hands from miniature Mattel Barbies. The one at left has feet from a Lego Friend, while the one on the right has the original Jakks Pacific Winx 3.75" action doll feet. Hair on both is made from faux fur. Wheelchair is a gift from Andrea. 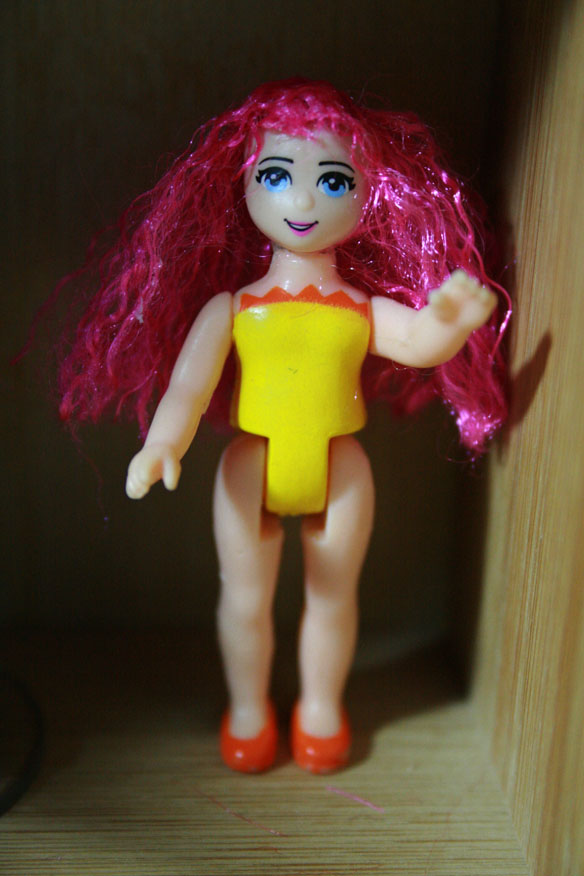 Isabel’s attempt at a fat doll has a body from a child doll that Andrea gave me. I have no idea what it was, but it had a massive head with rooted hair. I replaced the head with a Lego Friends one and added faux fur hair. My favorite of all Isabel’s dolls so far because a) she’s fat like Isabel and b) she’s precisely 2 inches high, which puts her at 12 inches in 1:6 scale. 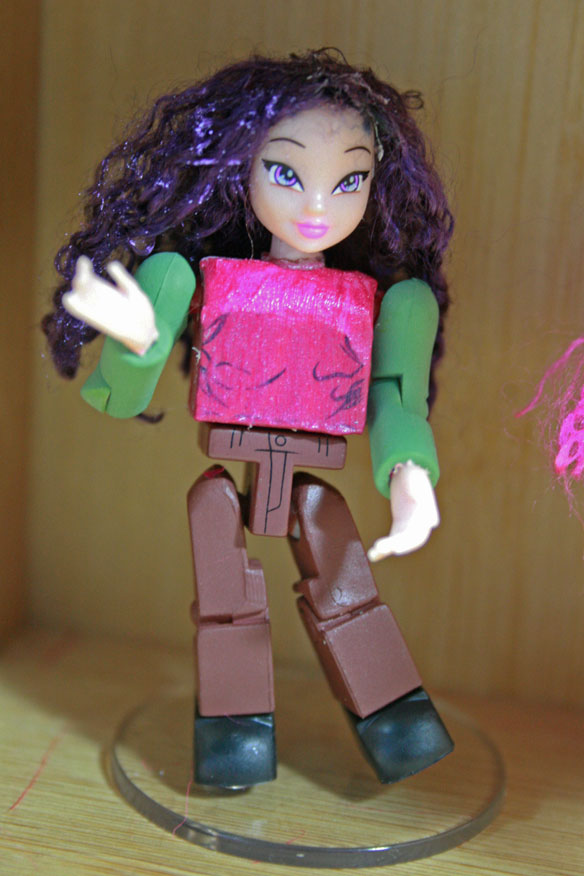 This doll features head, neck and hands from a Jakks Pacific Winx 3.75" action doll. Body is from an Art Asylum/Diamond Select Toys Minimate with top of torso rounded and repainted. Faux fur hair again. Surprisingly articulated for such a small figure, even after I sacrificed neck, wrist and torso swivels. 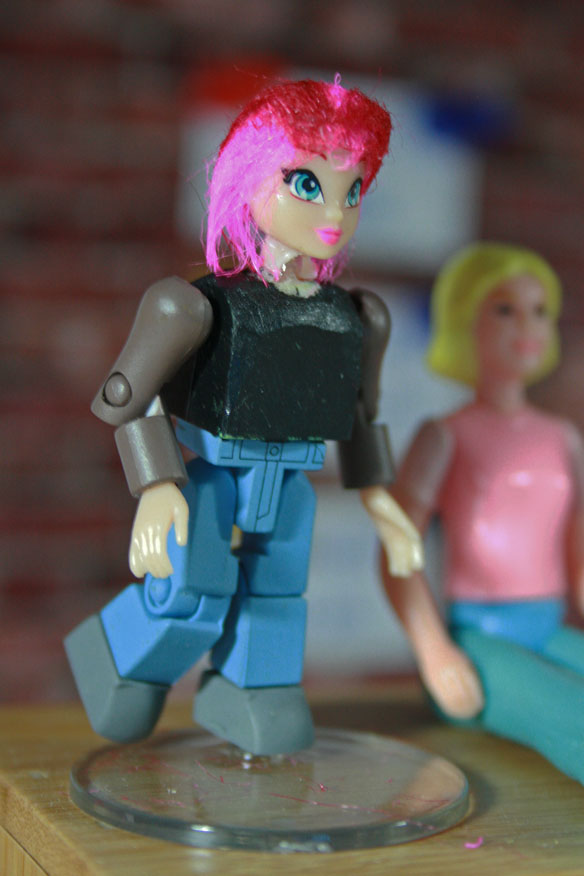 Same combination of parts as previous. 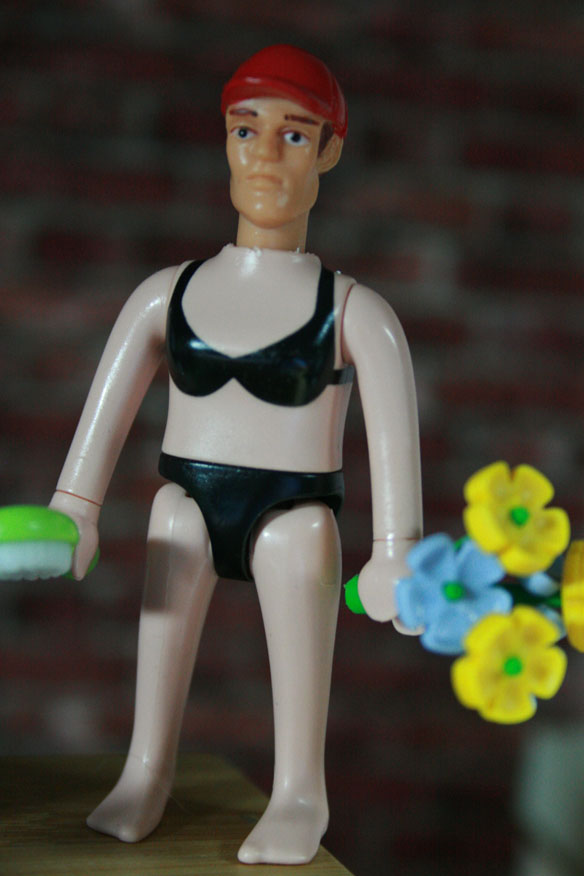 This doll has a head from an unknown 1:18 scale action figure and a body from a Playmobil figure. Accessories are also from Playmobil.

According to Isabel, this doll, named Laura, is an introverted, dykey, video gaming trans woman who, after three years on hormones, was harassed by her elder sister into borrowing said sister’s bikini and going to the beach. Laura’s sister attempted to nix Laura’s baseball cap, but Laura never goes anywhere without that hat.

This entry was originally posted at http://modernwizard.dreamwidth.org/1565703.html. You can comment here, but I’d prefer it if you’d comment on my DW using OpenID.