With bonus shadows, raytracing and 3Delight render engine use! 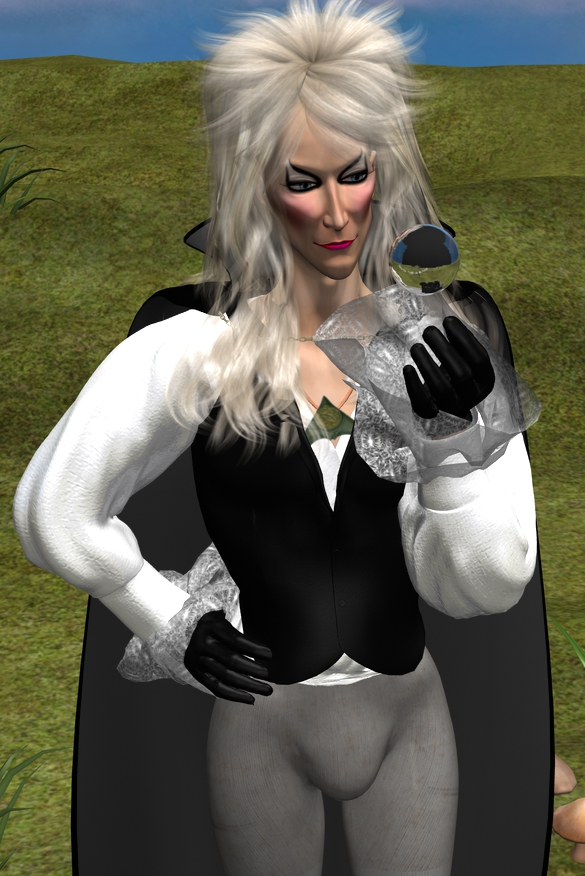 Credits: Jareth is a freebie Daz Genesis 2 Female figure with a bunch of morphs ported over from Genesis via Dimension3D’s GenerationX2. I originally designed this character’s morph on the Daz Michael 3 base with help from Daz Michael 3 head and body morphs and many refinements from Capsces Digital Ink’s Brom custom morph package for M3. Further adjustments and body part scaling occurred when I ported Jareth over to the Genesis 1 base. Crucial to the success of this render is RAMWolff’s Male-Bulge morph. :p

Texture is rebelmommy and shellyw’s RBSD V4 Merchantbase, made possible by Victoria 4 [morph and UV set] for Genesis 2 Female by MallenLane. Makeup contains elements from Art Collaborations’ Art Makeover Merchant Resource for Victoria 4 and Genesis. I did the eyebrows myself with help from 28 [free] Eyebrow Photoshop Brushes by photoshopweb.

Hair is made of two instances of Cherry Hair for Genesis and G2F by Valea, with custom scaling and trans maps by me. There’s also an instance of Kozaburo’s free Messy Hair for V1, with Morphs++ as added by Travis Casey and a custom trans map by me.

Outfit is, from top to bottom, as follows: Uzilite’s freebie Marquis cape for M4, freebie Flat Necklace 01 for Genesis by wilmap, pendant scanned by me, Blouse 01 for Genesis by SickleYield, vest from Adzan’s freebie Still Morning for H3, morphed a bit with D-formers by me, shirt cuffs from Neftis’ Lestat de Lioncourt Suit for Genesis 2 Male, pants texture applied as a second skin  from SickleYield’s freebie Free Leggings for Genesis, wilmap’s freebie Buckle Heel Boots for Genesis [not shown]. Shaders used include GeorgeHaze’s freebie metal shaders and leather/Spandex shaders, as well as SickleYield and Fuseling’s latex and rubber shaders.

Pose derives mainly from one of Khory’s Easy Going Poses for Michael 5, with some help from katastrophe’s Body Talk Arms. I did the expression myself.

Crystal ball is FirstBastion’s gazing ball from the Useful Mirrors set, scaled down. Set is Art Collaborations’ Enchanted Glade. Lights are one of two sets that came with Useful Mirrors, tweaked by me.

This entry was originally posted at http://modernwizard.dreamwidth.org/1639393.html. You can comment here, but I’d prefer it if you’d comment on my DW using OpenID.