This month’s Figurvore prop challenge was to construct something kitchen-related and to provide photos of dolls using the item. Originally I planned to make a popcorn popper, though I had no use for it, but I turned my mind instead to one of the gaps in my set collection that has long frustrated me: the lack of a 1:6 scale refrigerator. Sure, I’ve got a stove, a sink, a microwave, a coffee maker, a table and chairs, a toaster, a blender, cooking utensils, silverware, plates, bowls, a hutch, crockery, a colander, etc., etc., etc., but I wanted a fridge dammit!

The Figurvore challenge only stipulated that we had to make the kitchen-related item ourselves. I restricted myself further to the construction of a fridge using supplies I had on hand or could print out from online. For simplicity’s sake, I also decided to make only the exterior. This fridge does not open.

To make the fridge, I cut the top flap off a shoebox, spraying both the remaining box and the separate lid with white spray paint. I cut two panels from the lid and trimmed the long edges with white electrical tape [not the short edges because I’m not going to be looking at them]. I used hot glue to adhere the panels side by side to the bottom of the shoebox. Thus the doors of the fridge stuck out a little bit from the body of the appliance. I painted dowels black, trimmed them to size and hot glued them to the doors for handles.

I spent most of my time decorating the fridge, since, in many houses, it inevitably ends as a vertical magnetic storage unit for all sorts of ephemera. Since the fridge belongs to someone who is obsessed with rabbits, I printed out small graphics of bunnies and cut them out to use as magnets. I cut up sticky notes to make their 1:6 scale equivalents, which I then wrote on and glued to the fridge with the help of the bunny magnets.

I also made the birthday card with scrapbooking paper and a printed out bunny. The key is one of my own that I scanned, mirrored horizontally, reduced to 20% of original size, printed out, glued together and stuck on a Rement tag. Magnetic pencil cup and pencils are also Rement. The white 3D rabbit is just a little toy that I got from a friend. The grey square in the upper right corner, a piece of origami paper, is supposed to be the manufacturer’s mark.

The white board and markers deserve special attention. I made the white board with a scrap of painted cardboard from the shoebox, trimmed with black electrical tape. For dry erase markers, I trimmed the ends off cotton swabs and glued strips of brown, pink or blue origami paper around the shafts. For marker caps, I wrapped black electrical tape around the ends of the shafts and trimmed to size, then stuck little circles of electrical tape on the ends of the caps to fill in the openings there. I colored the raw ends of the markers with black permanent marker. Since some of them are supposed to be magnetic, I hot glued them to the door, but I did suspend one from the board with string.

Peekaboo the demon and Flower the fairy show scale while having a snack below. 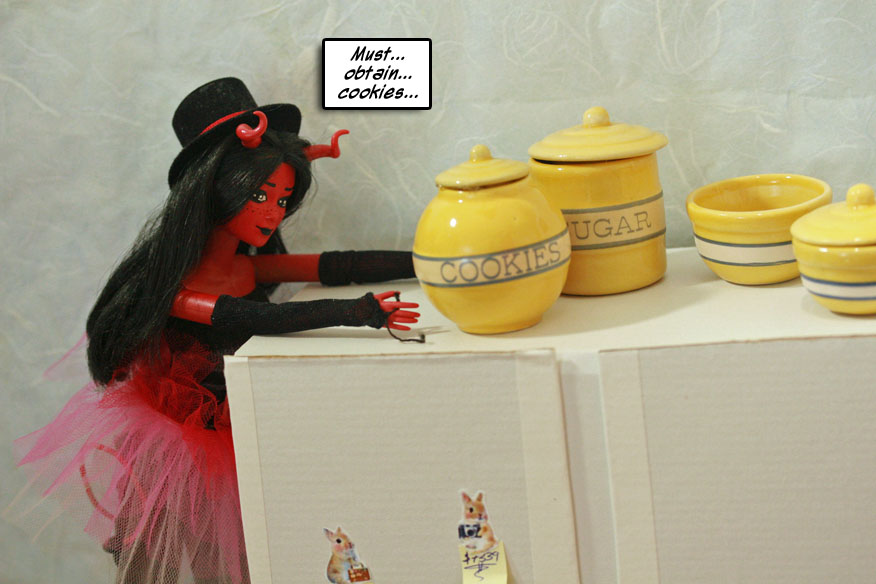 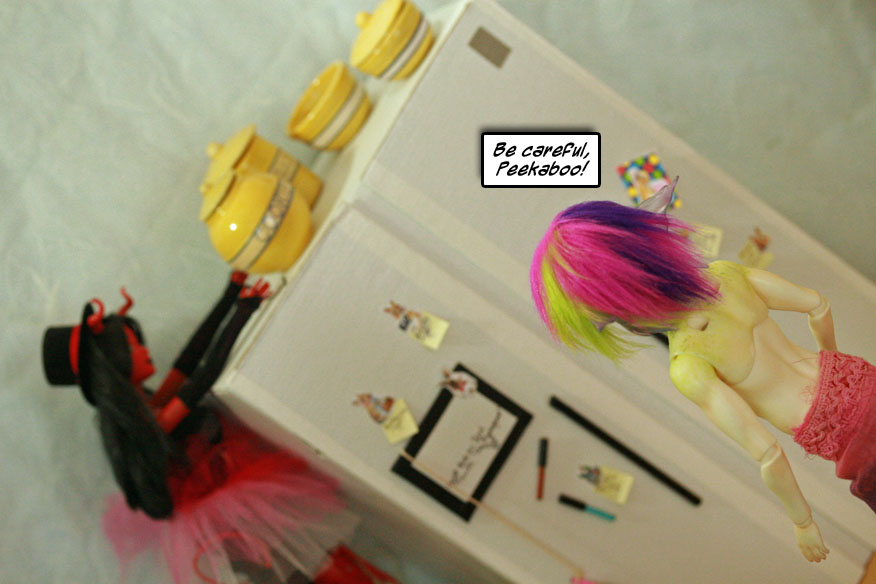 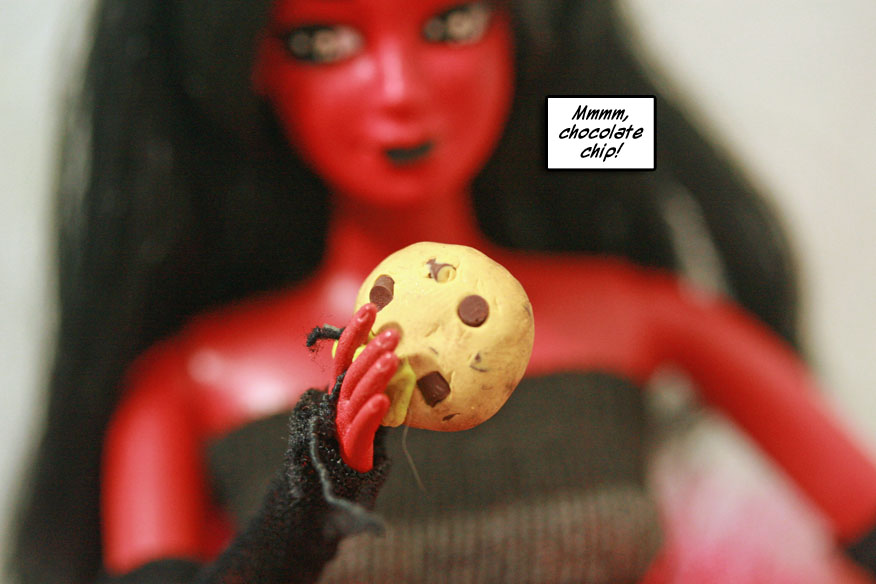 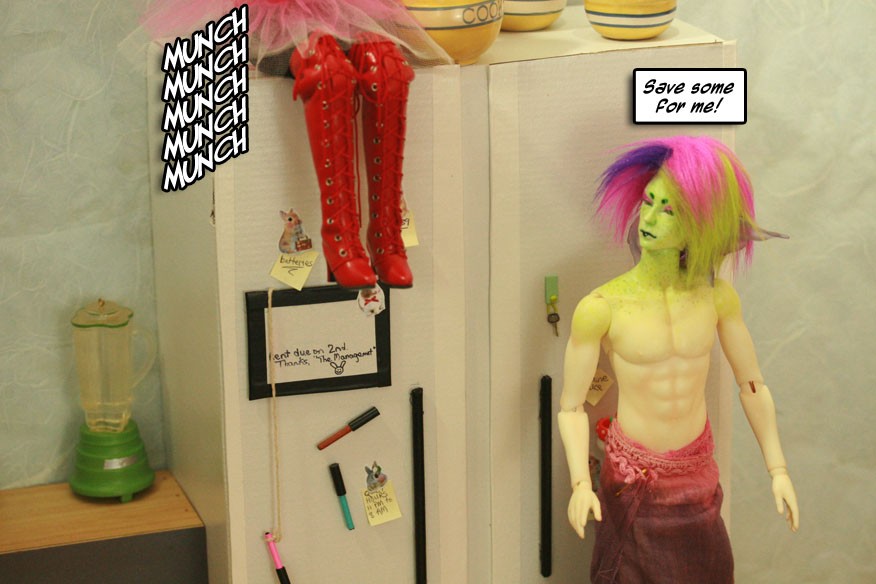 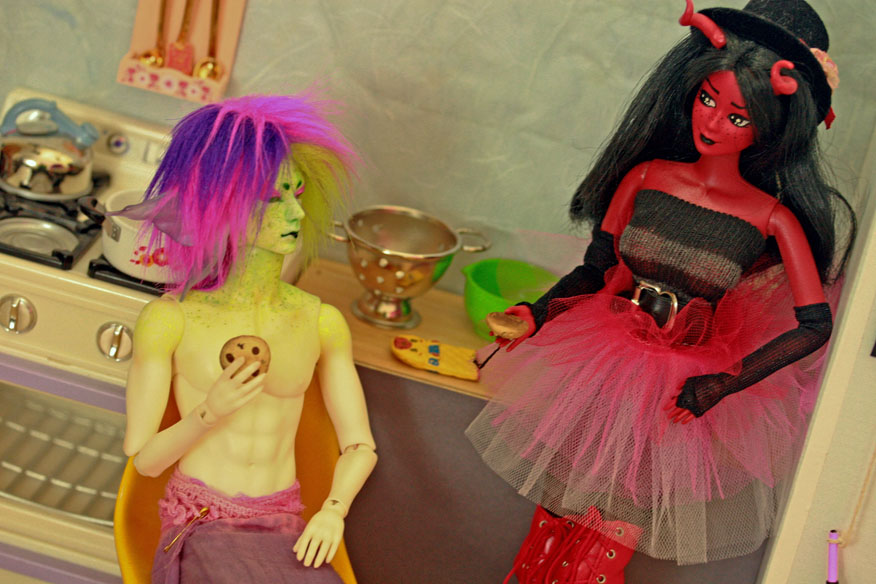 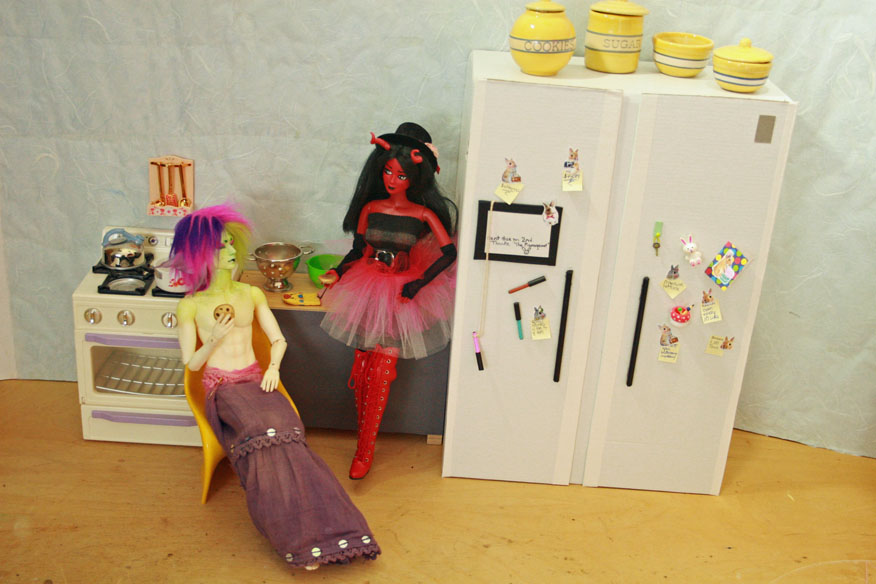 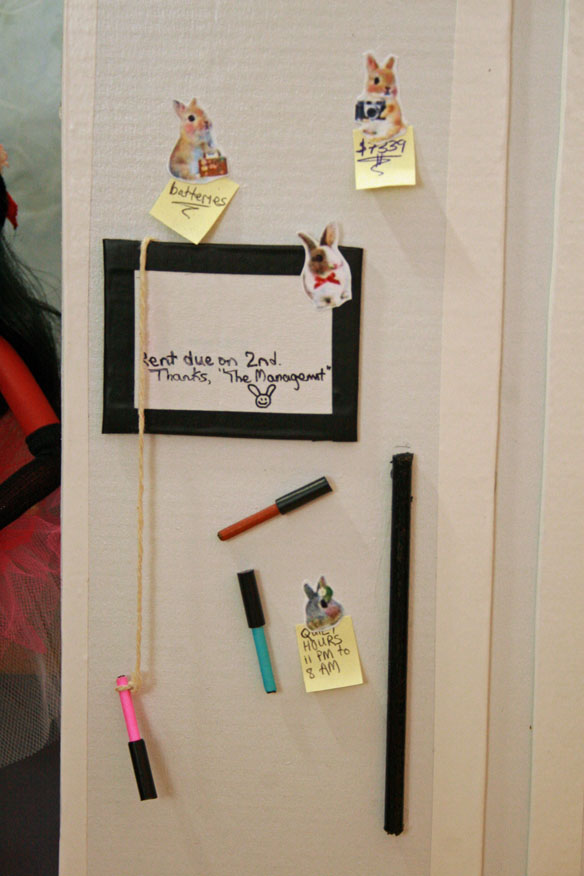 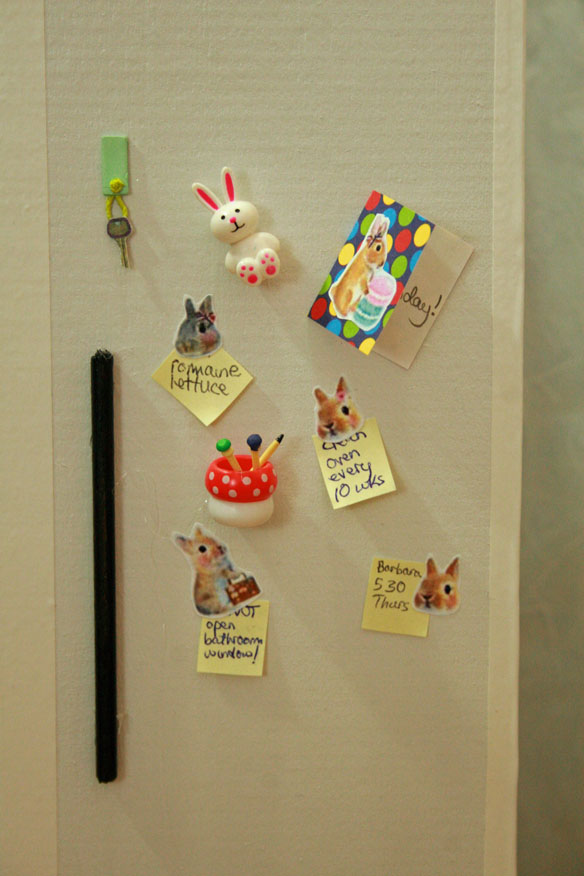 This entry was originally posted at http://modernwizard.dreamwidth.org/1660953.html. You can comment here, but I’d prefer it if you’d comment on my DW using OpenID.