I worked more on both of my digital hairstyles in progress: Aliza and Zabby. Aliza is inspired by the Goblin King’s ‘do in Labyrinth, while Zabby is inspired by the stuoendous hair sculptures of late eighteenth century western Europe.

I improved Aliza by crudely deleting unnecessary polygons in an attempt to make a smaller, less unwieldy mesh. I also redid the movement morphs. Here’s the updated hairstyle demonstrating the effects of LeftSideXTranslate and RightSideXTranslate morphs. 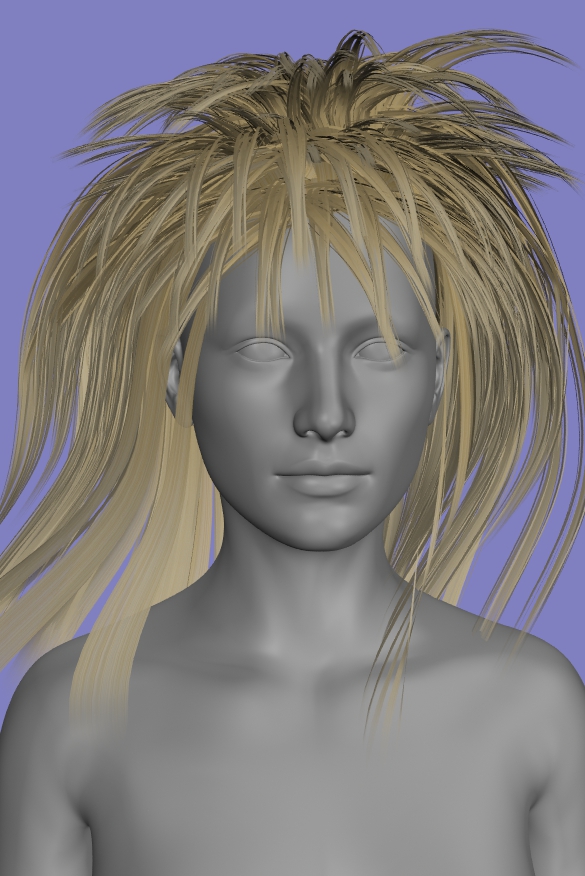 For Zabby, my latest creation, I used a combination of Hair Designer elements and my own sculpting efforts. 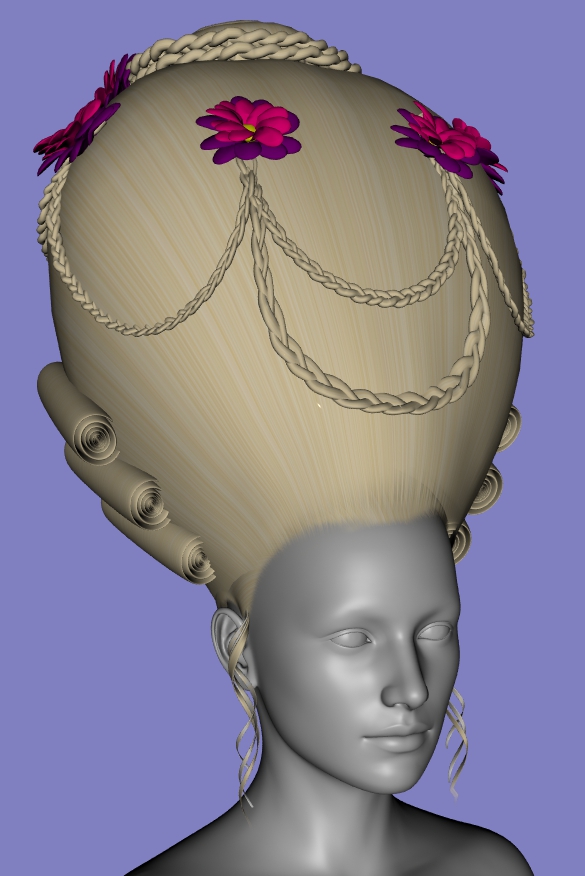 I reshaped a skullcap for the main pompadour and spiraled up a thick ponytail to be the bun model. The braids, of course, required remodeling to make them lie right. I did the scroll curls from scratch with nested torus primitives and the flowers from sphere primitives that I used D-Forms on. All sculpting and remodeling occurred within Daz, even though it’s not really a modeling program. I did, however, use Meshlab to decimate the high-poly flowers into something more lightweight on the system.

Both Aliza and Zabby are by no means expertly crafted. They both have rather sloppy geometry; in Aliza, layers of hair collide, while in Zabby, the braids sink too far into the pompadour once or twice. With Zabby, I also disguised a break in the braids around the upper bun by sticking a flower in the gap, and I think some of the flower petals aren’t fully connected to others.

That being said, I feel quite proud of my first two efforts. With the basics provided by Hair Designer + my own limited sculpting skills + lots of time and patience, I can translate into reality my ideas of rather complex digital hairstyles. When I consider that a commercial version of something similar to Zabby, bice and OutOfTouch’s Grandiose Hair, sells for $19.95 and ain’t nearly fabulous enough for my tastes, the $24.95 Hair Designer, which allows me to create a hairstyle that looks like a hot air balloon, proves itself well worth the money.

I can already cross two items off the list of digital hair goals that I made at the end of last month!

This entry was originally posted at http://modernwizard.dreamwidth.org/1664745.html. You can comment here, but I’d prefer it if you’d comment on my DW using OpenID.