There are a bunch of therianthropic people who live in the mini universe, but I haven’t named and given personalities to all of them. Here are a few, however: 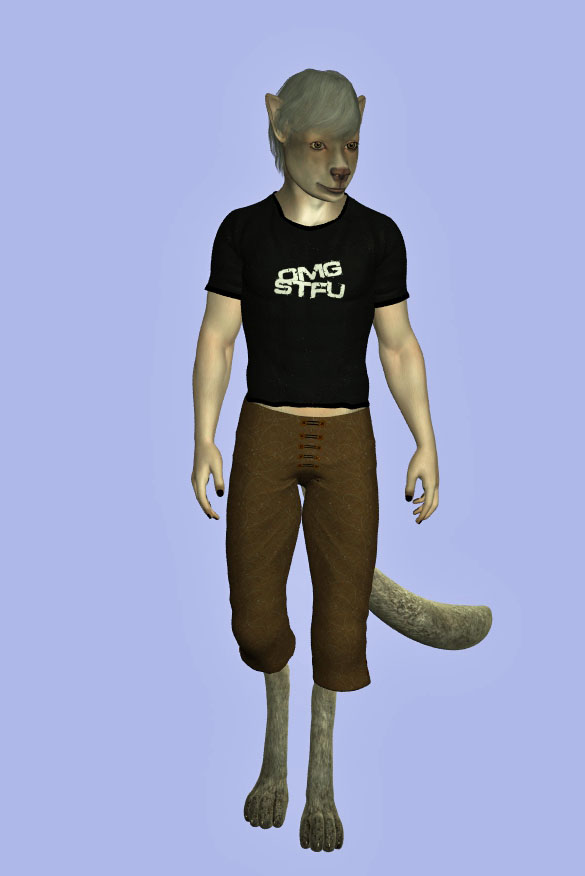 Darius is a 13-year-old grey wolf therianthrope. He likes to tinker with

computers and is a serious digital modeler. He tries really hard to be bad-

ass, but is definitely anything but.

Genesis Head and Body Morphs, DieTrying’s 142 Morphs for V4, Morphia for V4 by

Capsces Digital Ink, Shape Shift for G2F by Zev0 and, for the lupine aspect,

Poses for M5 by Khory. 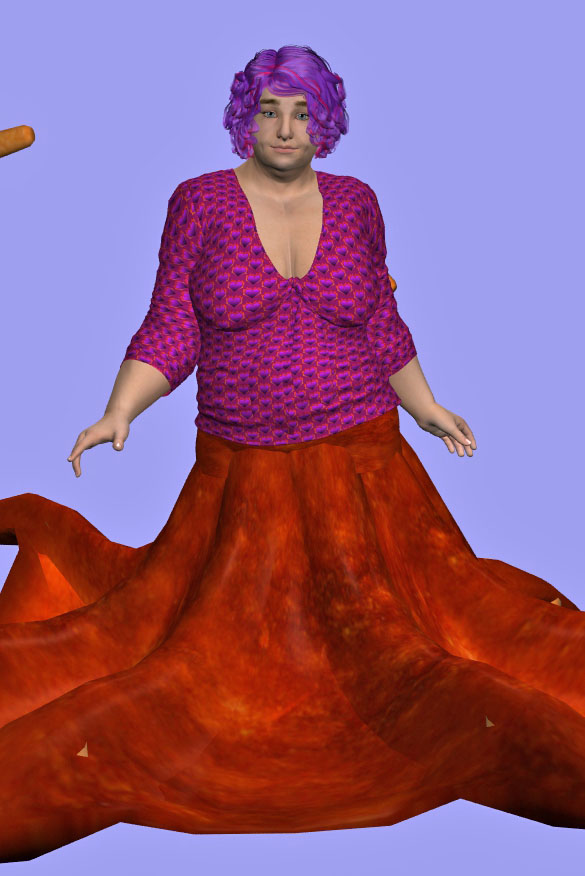 Lauren is an octopus therianthrope somewhere in her early 40s. Extroverted and

ebullient, she makes friends easily and enjoys being the center of attention.

She is a queer trans woman. She works as an orchestral conductor and has a

Generation X2 [or whatever he’s calling it these days]. V4 UV set by

with an altered, recolored freebie seamless hair tile by MSTene. Shirt from

Silver/Wild Designs’ Neat Pleats for G2F, retextured with one of my freebie

Poses for V6, my new go-tos for easy, neutral standing or walking poses.

Crappy lighting by me!!! 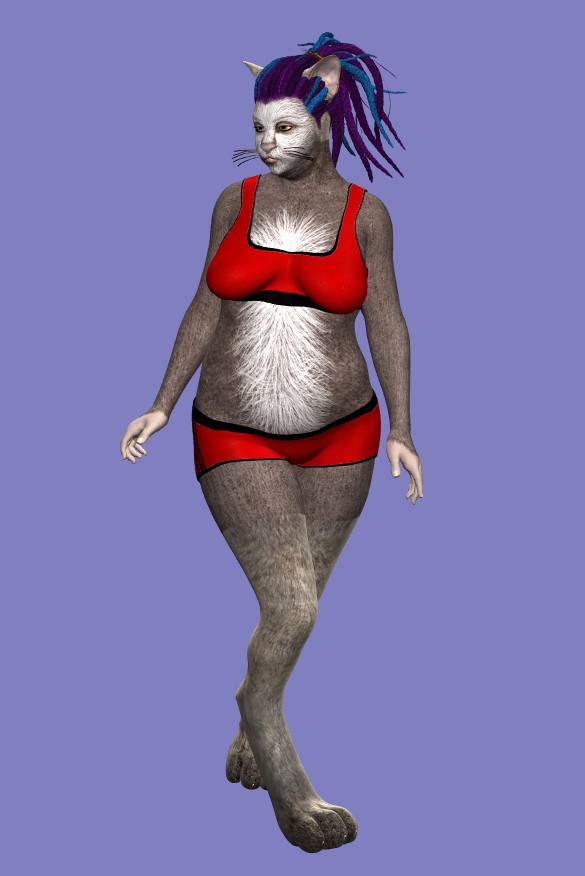 Lynanna is a Felis domesticus therianthrope somewhere around 50 years of age.

She has a background in studio art and engineering, and she works as a

freelance maker of industrial product animations. She also has a very dry

including Mildred Busybody for G2F by Tempesta3D, Face Weight for G2F by Zev0,

Creature Morphs for V4 and Mutations for Genesis Morphs by SickleYield. Ears, 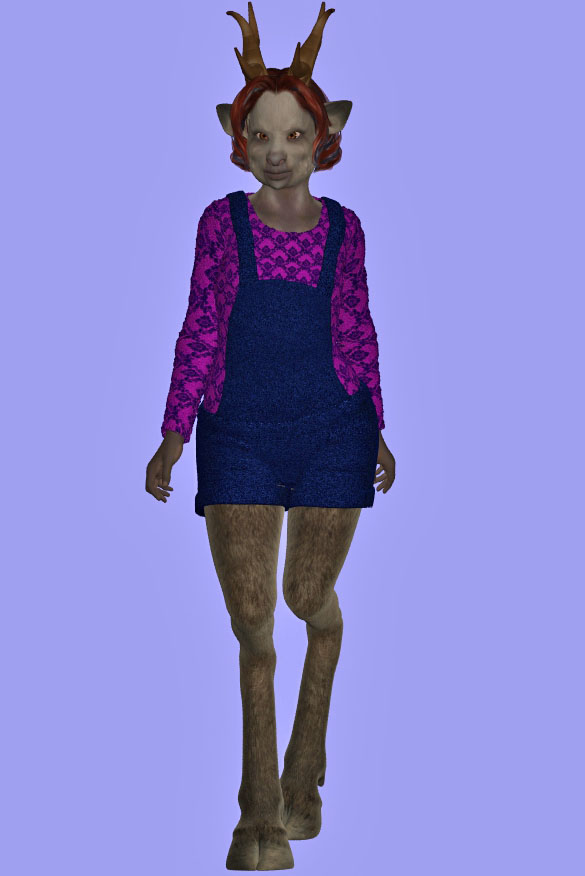 Orono is a caribou therianthrope in her late teens. For a pacifist vegetarian,

she has a disturbingly violent imagination and a predilection for splattery

horror movies. She cheers every time the blood sprays.

Morphs for V4 and Morphia for V4 by Capsces Digital Ink. Legs and antlers:

Creature Creator Add-Ons for G2F. Antlers created by me from basic horn prop 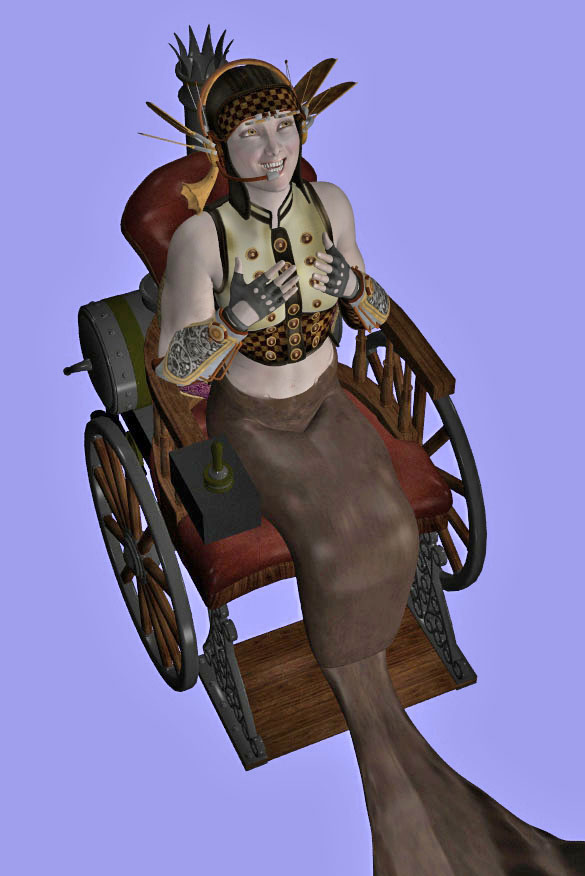 Champlain. She comes up on land regularly [for which she uses an electric

cooking, especially barbecue. She bowls people over with her enthusiasm and

ends nearly every sentence with an exclamation point. She thinks steampunk is

Base: G2F. Texture: Calais for G2F by AprilYSH. Morphs: various, including 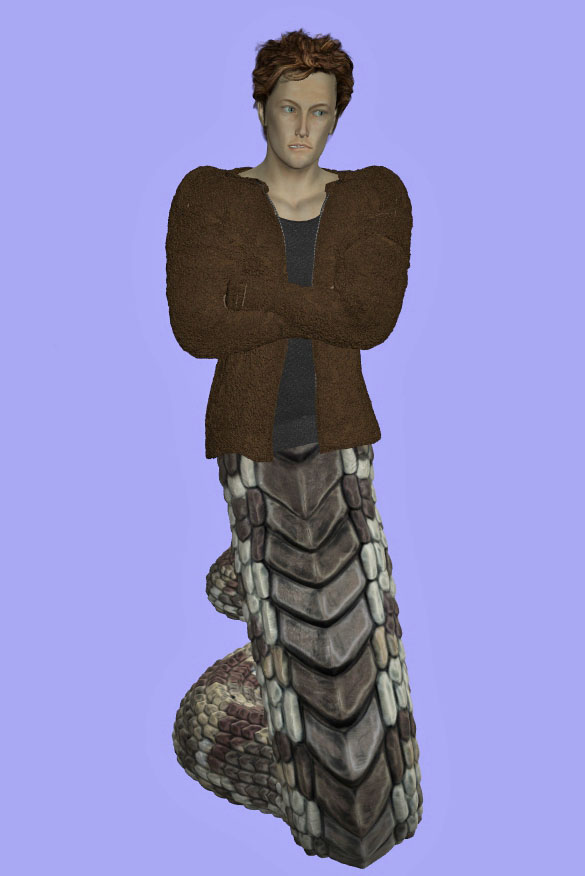 Tomaeo is a snake therianthrope in his twenties. He’s one of those people who

seems very loud and confident, but is actually rather compensating for great

shyness. He’s a notorious flirt around easily identified hetero women, but is

gender expressions. He is of the opinion that puns are the highest form of

Base: G2F. Texture: Dryden for Genesis by ThorneWorks. Morphs: various,

including Genesis base, Michael 3 head and HDAsian for V3. Tail: Succubus

Add-Ons for G2F. Clothing: Blouson for M4 by mamomamo, with jacket shading

This entry was originally posted at http://modernwizard.dreamwidth.org/1681054.html. You can comment here, but I’d prefer it if you’d comment on my DW using OpenID.