As I have previously mentioned, I love the standalone figures created for Poser and Daz Studio by Nursoda.

His small fairy Vila I have turned into a 1:1 scale human, Penni, who appears occasionally in the mini universe. 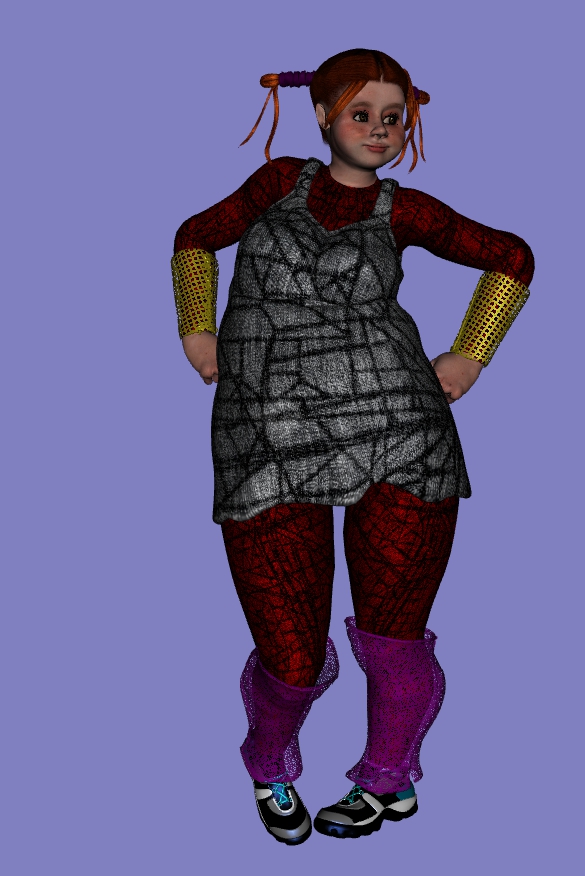 Her style and personality are influenced strongly by the fact that she reminds me of Pippi Longstocking!!

His long and gawky elf Telka I reduced in size [to about 55%] to make the only goblin [so far] in the mini universe, Neffy. She, like all the other [as yet unseen] goblins, has fiber magic, so she’s very good at making, dyeing and constructing things out of fabric. Here’s a picture of Neffy’s earlier incarnation, a more bad-tempered creature named Ramona. Neffy looks about the same, though lighter brown in tone and less baleful in aspect! Neffy also has way more clothes of much tackier appearance! 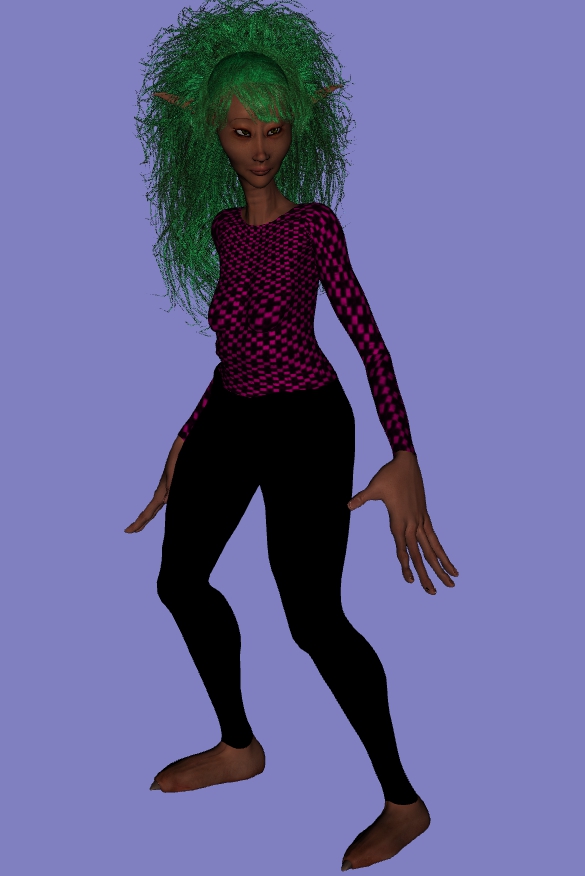 StudioMaya’s Hard Rock Hair for V4 balances out her small, elongated skull globe, making her head seem more human in proportions. I swapped out her default leaf-based outfit for a pair of second-skin black leggings and a geoshell top, shaded with a pattern from Calida’s Verne Trading Company Steampunk Shaders. Shape is default Telka’s, and pose is one that came with her.

I also have Anceata and Semil, a single figure with two character morphs and an outfit for each. I have tinkered with them a bit, but they haven’t appeared in any renders, much less the mini universe.

Anyway, to return to my topic sentence, if Jareth and Jennifer were toons, they would definitely be Nursoda figures. Jennifer would be, of course, Vila, while Jareth would be a figure that I don’t yet have: Doctor Pitterbill. I would have to tweak the face [mostly the nose], but all the essential elements are there: the long, gaunt structure, the sharp cheeks, the big, shadowed, slightly sunken eyes and, as with all Nursoda figures, an expressive set of eyebrows and lips! In other purposes, I could enlarge the hands, feet and ears and come up with another goblin for the mini universe.

Jareth: "Great idea! You know you need another representation of me!"

This entry was originally posted at http://modernwizard.dreamwidth.org/1705963.html. You can comment here, but I’d prefer it if you’d comment on my DW using OpenID.