As posted to the Carrara forum on the Daz boards:

I finally spent some substantive time in Carrara 8.5 this weekend.

I loaded up an instance of my preferred base model, G2F, morphed my character, then applied custom materials. After that I went into the Texture room and consolidated duplicate shaders. A spot check revealed that all maps correctly imported into Carrara, though values might not be perfect.

QUESTION: How/Where do I save the customized material preset [shader?] once I have it adjusted for Carrara?

Then my model got dressed. After an extended excursus into second skin clothing to avoid pokethrough, I finally went with the3dwizard’s G2F Ultra Bodysuit as a solution. I fit the suit to my character, then hid it. Then I fit all visible clothing to the suit, using some of the many morphs available in the suit to keep the clothes from intersecting with the character. Success!

QUESTION: Does Carrara have an equivalent to Daz Studio’s Create Camera feature? With that feature in Daz Studio, I can scoot around the Perspective View — or any camera really — until I find a good angle, then Create Camera, then designate the new camera to Use Active Viewport Transforms. It will then position itself at the good angle I found. Can Carrara do the same?

As for lighting, well, let’s just say that’s a work in progress. I have always had a huge fight with lighting in my actual photography, as well as Daz Studio and now Carrara. In my photography, I have finally resorted to two umbrella lights for a diffuse, ambient light with soft shadows. In Daz Studio, which doesn’t have ambient light options [hissssssss!], I have most recently been experimenting in the creation of an “ambient cheat sphere” [radius 2000m], encompassing my entire scene with a bunch of distant lights, all pointing toward the center.

In other words, my lighting goal at this point is a clear ambient light that lights everything realistically, provides very soft shadows, gives everything a slightly toony look, and renders speedily. I have not delved much into lighting, only experimented a bit with HDR and general ambient only, as shown in the attached render. The attached render actually gives a pretty good representation of the kind of light I’m going for, though I’d like slightly stronger shadows, warmer colors, and better detail on the clothing texture.

QUESTION: I put Carrara default standard glass shaders on the cornea and eye moisture or whatever. Obviously I’m not picking up any catch lights, though. Is that because the only light source is ambient? I currently have iris and pupil specularity at 0%, but I’m thinking I need to turn it on. What’s the Carrara name for specularity again?

One character down, two to go. Then they’ll be ready to frolic in HowieFarkesLand and TangoAlphaLand!

QUESTION: If I have a character saved in a separate file, how do I add them to a scene? In Daz Studio, you do this with the Merge Scene command. I poked around, but did not see this command in Carrara.
Thank you, everyone, for your help, encouragement, and answers so far. Your excitement and absolute faith in the awesomeness of Carrara motivate me in my explorations. 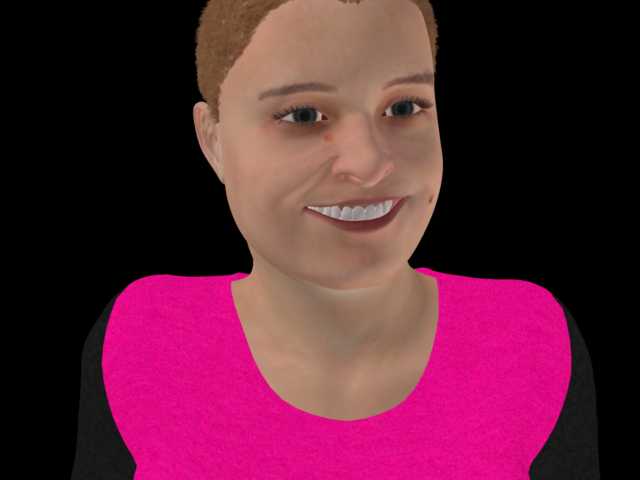