After our discussion yesterday, during which Jareth let me know how vital this outfit was to his continued existence, I bought it for him as an early Christmas present. Here’s a crappy render of him in the decidedly non-crappy outfit. 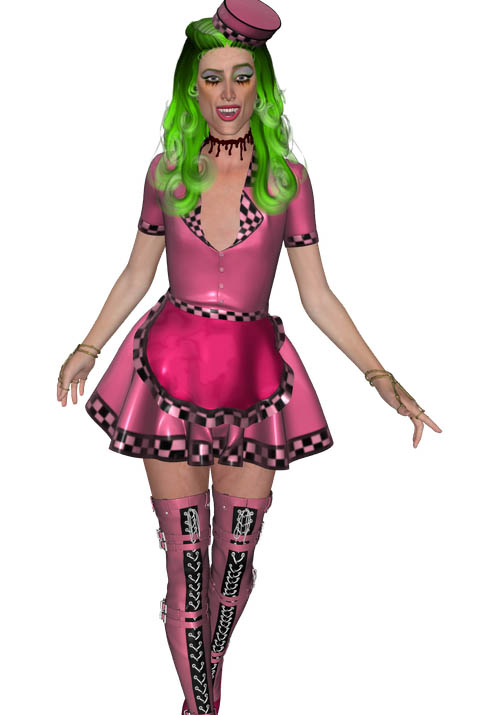 Just for shits and giggles, let’s take a look at an earlier iteration of both Jareth and this outfit, done about 2 and 3/4 years ago: similar but not the same. 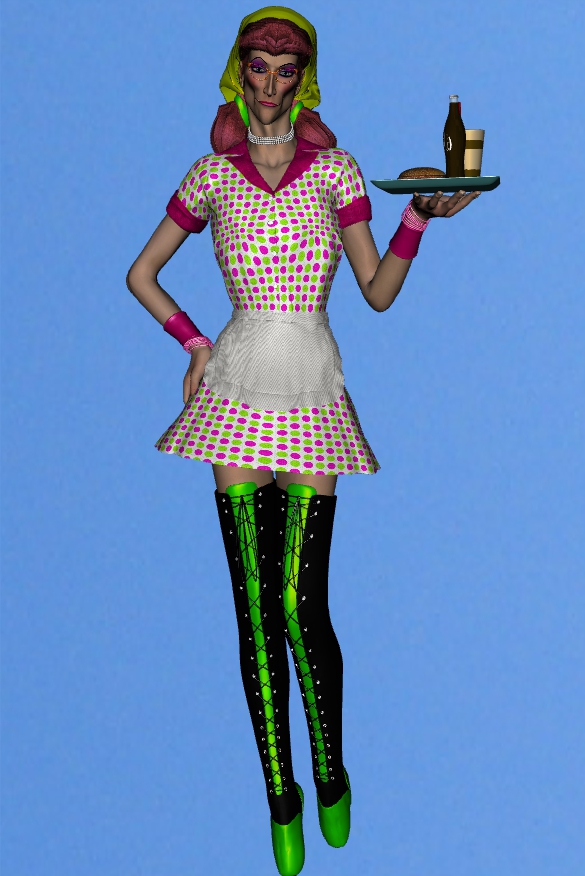 I am pretty sure that’s a Genesis base figure, i.e., two generations earlier than G3F mentioned above. From top to bottom, he has propschick’s freebie Merry Hair, Valea’s freebie Gisele Jewels pearl choker, Daz/Ravenhair’s Carhop [dress, apron, food tray and pose] for Genesis Female, Adzan’s freebie Solar Solace jewelry for Hiro 3 and Nemain’s Ecstasy Ballet Boots for V4. Shader-wise, we can blame the kerchief, the ponytail holders and the boots on Sickleyield/Fuseling’s Latex/Rubber Shaders for DS. Dress pattern is from a free texture tile from patterncooler.com, tweaked by me. Backdrop is a photo by me.

As I compare the two pictures, I see a significant improvement in technology. The earlier Carhop dress does some weird shit in the pectoral region, accommodating nonexistent breasts. The stiffly sculpted skirt might as well be made out of sheet metal. By contrast, the more recent Rolling Waitress dress has no problem accommodating the more recent model’s pectoral shape, and the skirt looks like it’s actually draping, hooray!

I also see an improvement in my own [admittedly limited] skill. I didn’t tinker with poses much back then. Being used to static dolls, I also didn’t do much with facial expressions. The results look rigid and unrealistic, kinda like that Carhop dress. Nowadays there’s much more messing around with poses and expressions [as is immediately apparent with Jareth’s and my eyebrow maneuvers in House of Escher I]. Practice leads to improvement, I suppose.