Character Options came out with a 10″ Thirteenth Doctor. After seeing how gay and dorky @natalunasans’ looked, I decided to get my own. I knew that, if I hesitated, the Doctor would probably increase in price on the secondary market, as the 1:6 scale Tenth Doctor and Martha Jones dolls have, and I’d be shit out of luck.

The Thirteen doll bears a very recognizable likeness to the actor Jodie Whittaker. The expression is neutral, tending slightly to the befuddled and definitely dweeby. I like it! Molded hair, tucked behind one ear on one side and partly obscuring the face on the other, is simply, but effectively sculpted. Body is sculpted more for function than form, but it’s all generally in scale. Right hand is sculpted to hold included sonic screwdriver, while left is in an open, neutral position.

The fabric outfit replicates the character’s dress with a few concessions to ease of use. Thirteen wears a long-sleeve white undershirt and a black T-shirt with rainbow stripes over that. These two pieces have been combined by Character Options into one piece, over which is a partly lined blue-grey trench with rainbow lapel trim, functional lined hood, and nonfunctional pockets. The high-waisted blue culottes Velcro in the front and have separate thin yellow ribbons for suspenders. There are molded brown boots with molded socks.

Paint is very simple on the face, with long dark eyebrows, unadorned eyes, and lips in a neutral orangey shade. I haven’t been paying attention to promo pics, but I’m pretty sure the character wears at least some more eyeliner. The character’s hairstyle with brown roots showing is approximated with a pale yellow layer over a brown plastic base. The yellow is too striking; I’ll have to work on this.

In terms of articulation, the doll has a single sculpt for both head and neck, with a ball joint at the base of the neck. Swiveling is good, though the neck socket on mine doesn’t quite accommodate the neck on sideways turns, so the front and back bust pieces separate slightly. There’s a bit of nodding movement, but not much. There are ball-jointed hips and shoulders, double-jointed elbows and knees, swivel waist, and wrists with both hinge and swivel joints. Doll can touch head and face [for extra puzzled/dweeby poses! :D], sit competently, and stand unsupported. However, because the feet are somewhat small, with only ankle swivels, balance is compromised.

This doll will run people in the U.S. between $30.00 and $40.00, depending on where you pick it up. It’s built for play, but the price is kinda steep for kids. Older fans of Doctor Who, however, won’t blink at the price and will take a highly articulated, realistic, well tailored Thirteen that actually looks like the character and go wild. I enthusiastically endorse this doll, with the caveat that it will not play nicely scale-wise with anyone else.

Would it have killed you to make Thirteen in 1:6 scale, Character Options? 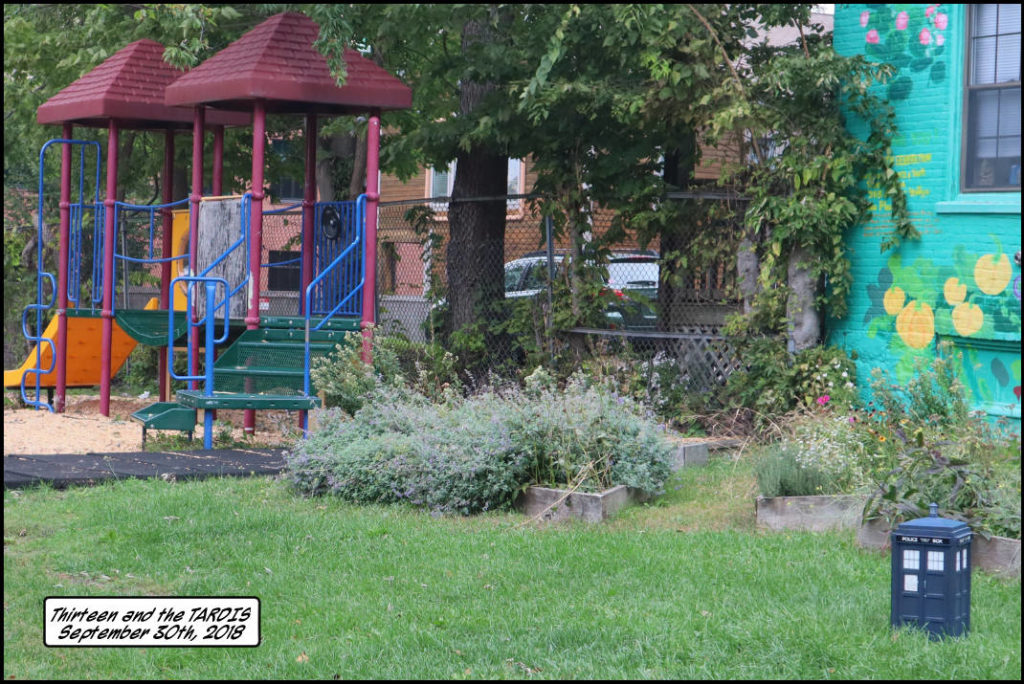 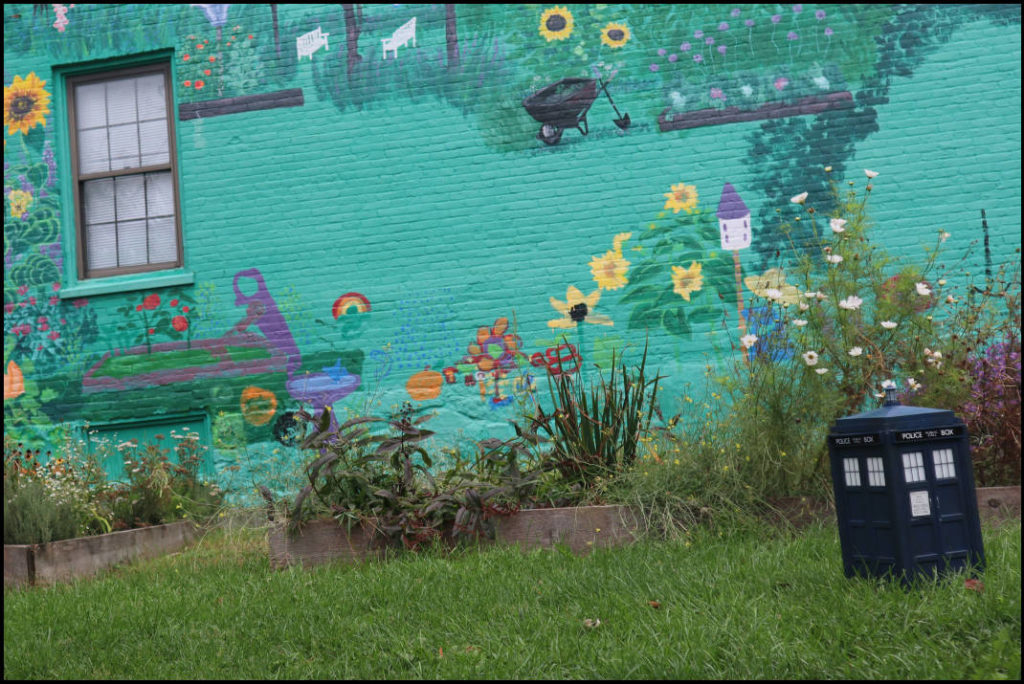 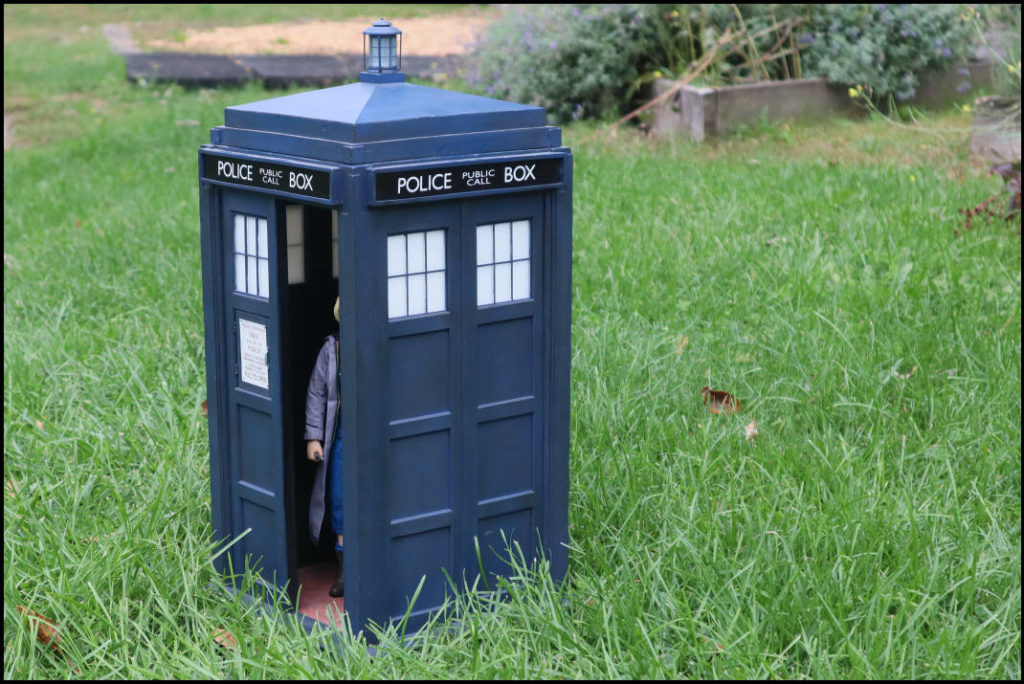 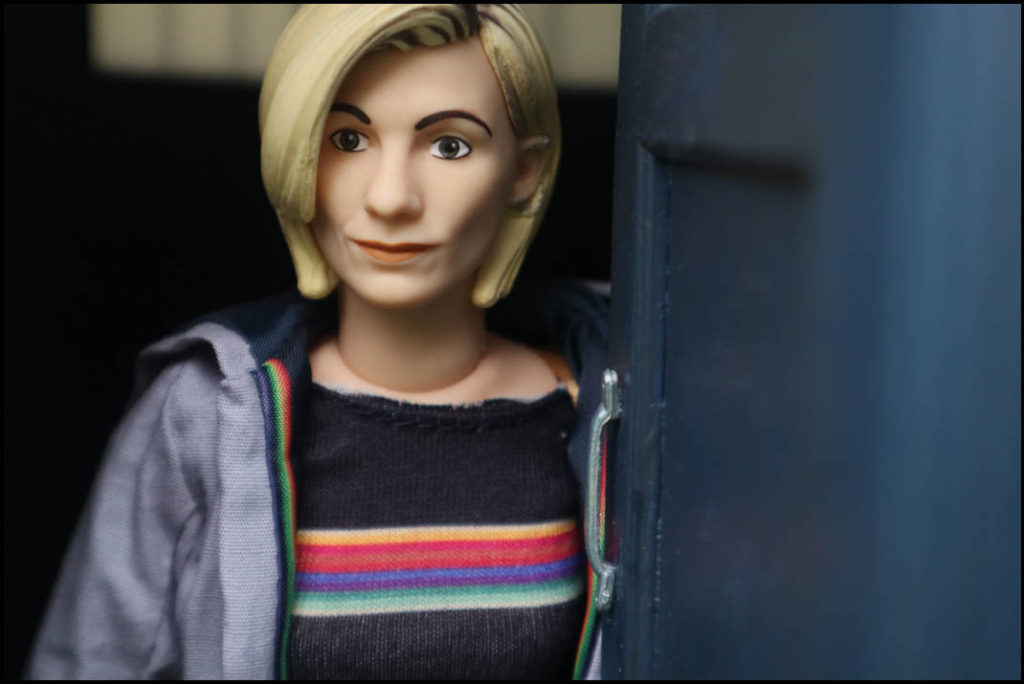 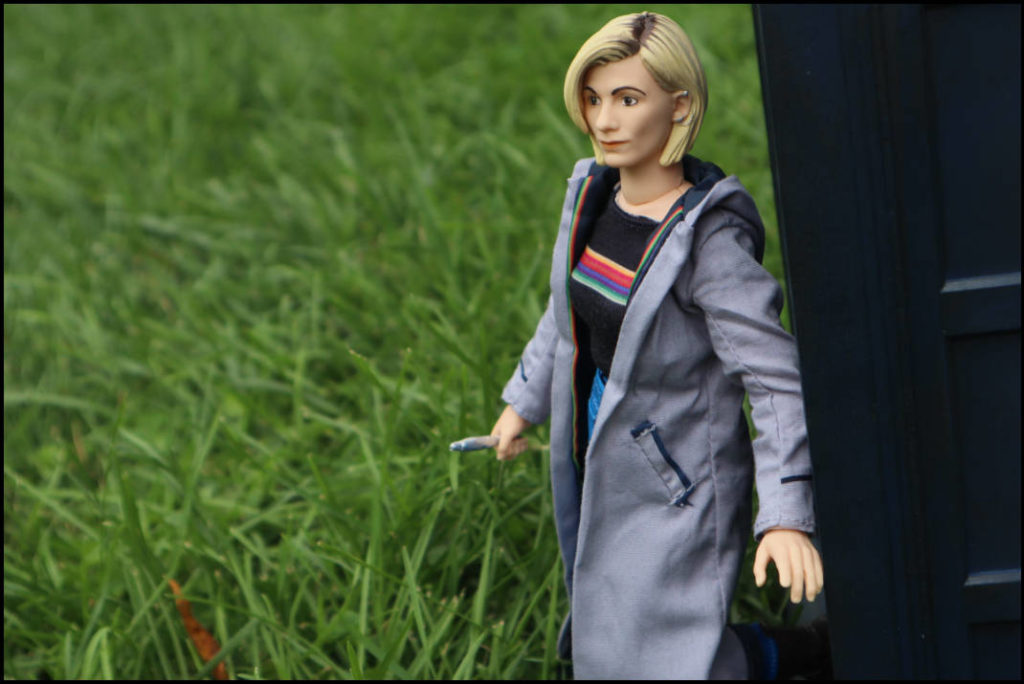 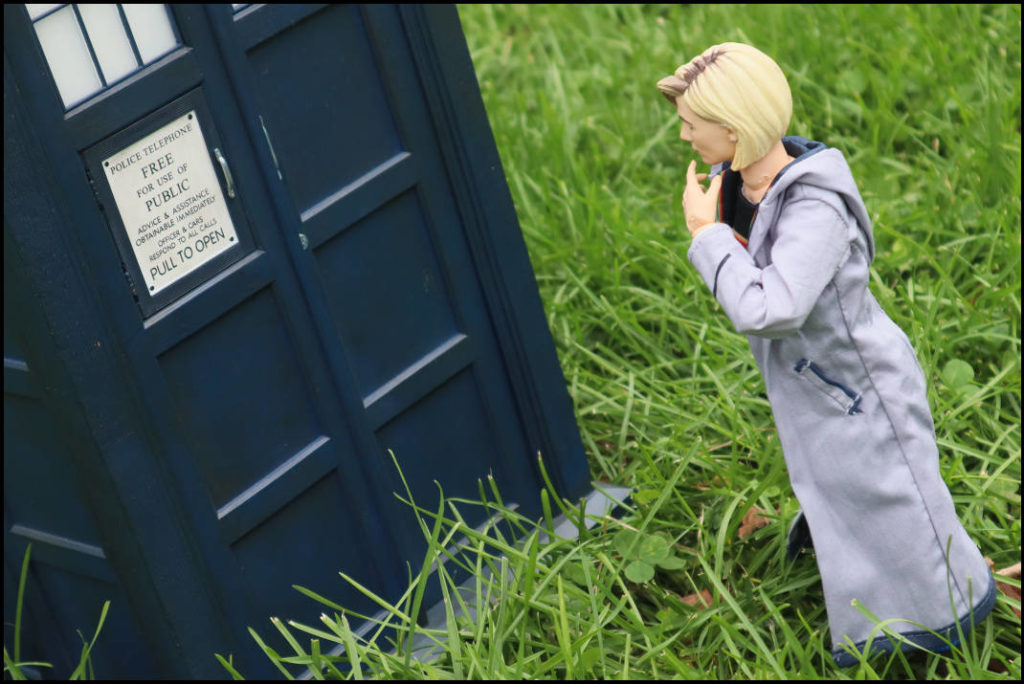 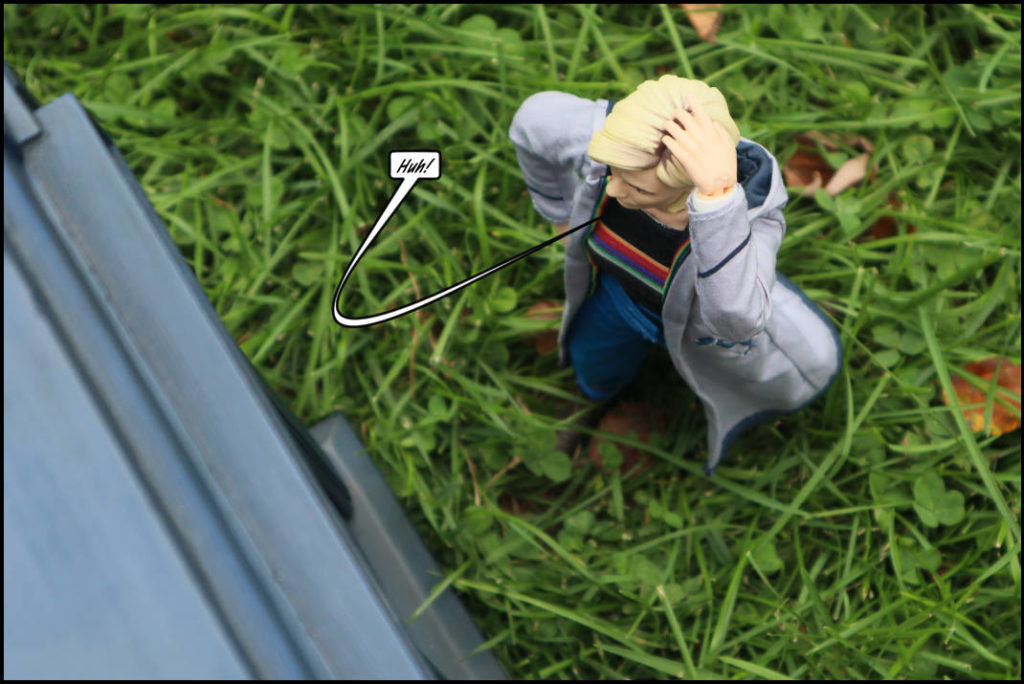 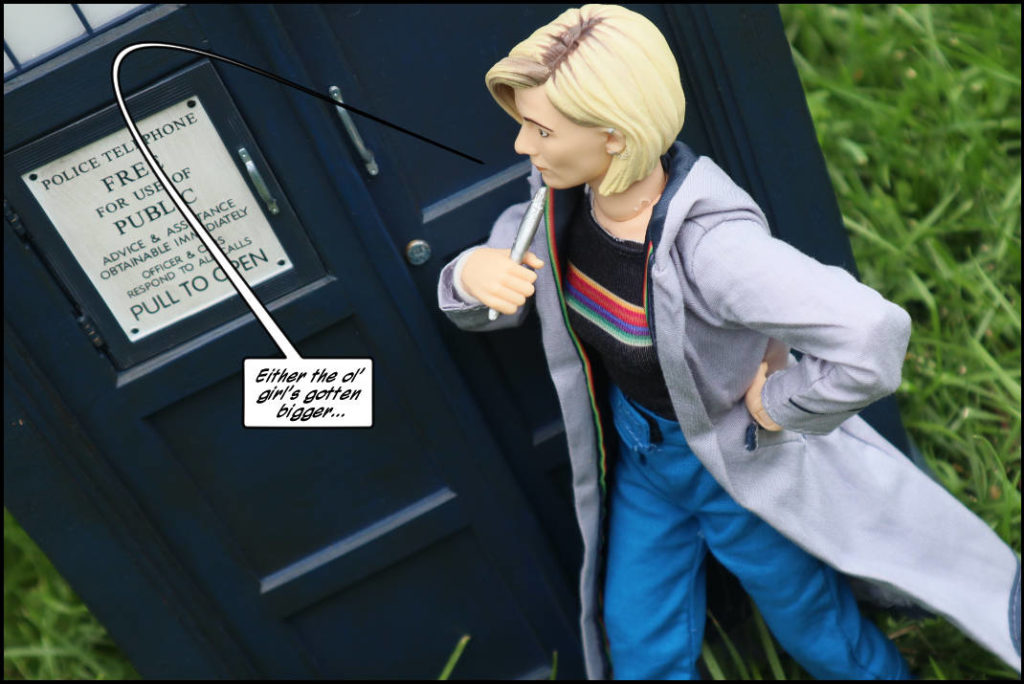 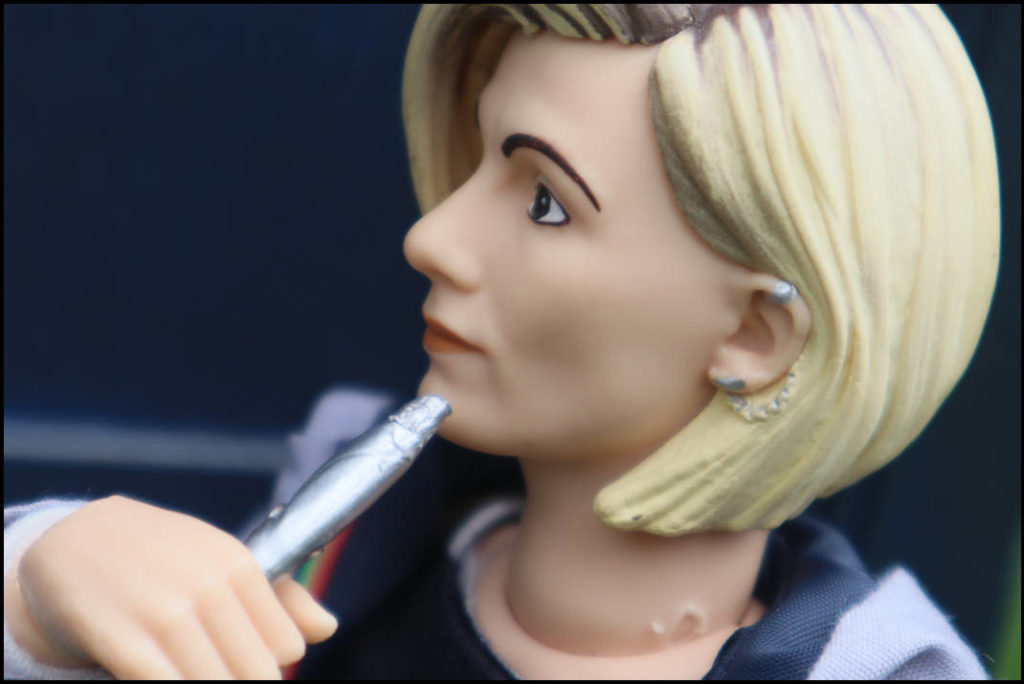 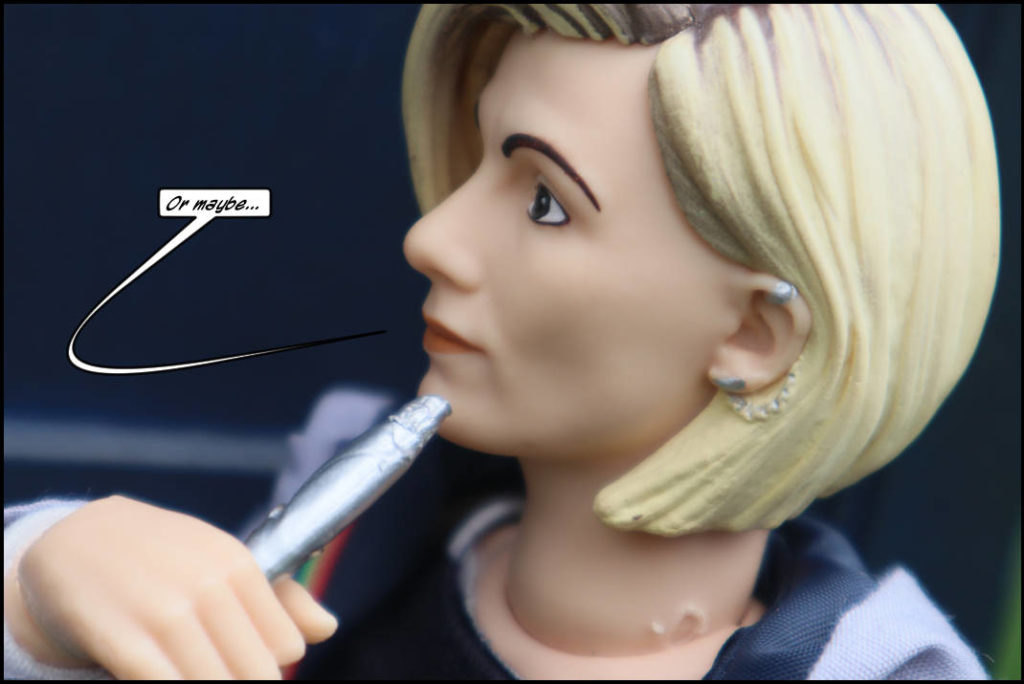 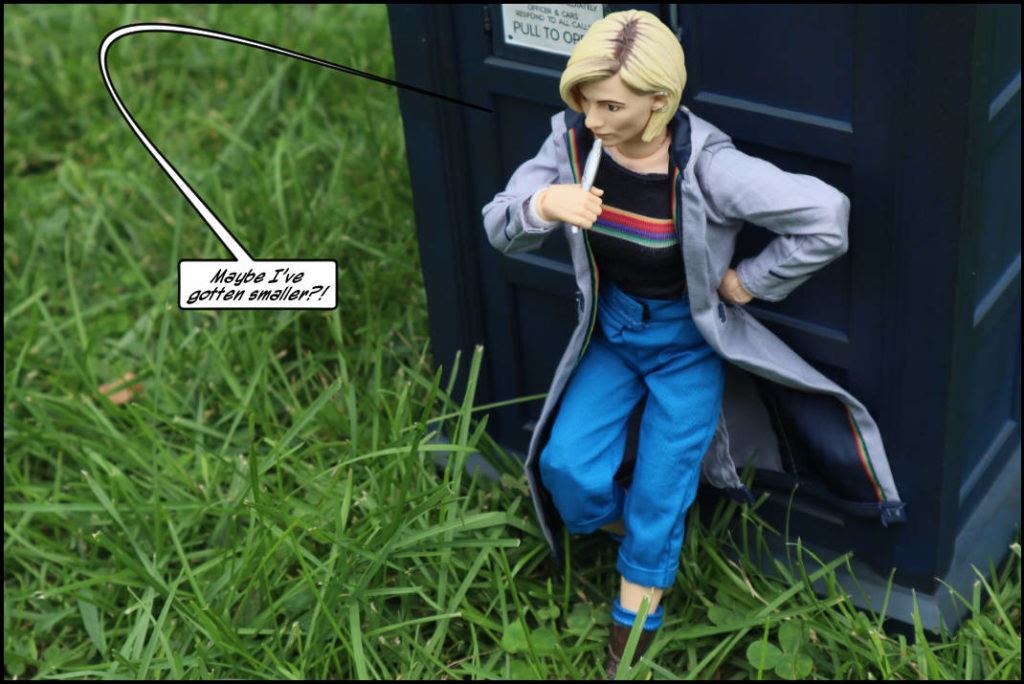