I initially created Davry purely as an experiment in rendering a person with achondroplastic dwarfism. Because I was successful with my digital model of him, I naturally progressed to the idea of a 1:6 version of him. After discovering the perfect head and amassing other parts and clothes, I now have a Davry doll!

1:6 Davry was going to be a DiD Timo head on a DiD Hermann body, but the DiD body was too scrawny, so it went to Chow instead. [Pictures of him later when I finish his hair.] So I turned to an Ertl Sportsman fig from Andrea for Davry’s body. Since the Ertl dude was 12″, I started by taking 2″ out of the legs, 1″ from the thighs and 1″ from the floor up. I glued the shortened legs back together with my bestest friend [viz., hot glue] and smoothed the thigh splices with Sculpey, which I boiled for 3 minutes to harden. Davry lost his feet, which I consider one of the most expendable parts of a fig, but none of his knee or thigh joints were compromised.

Next, I removed a total of 0.5″ from the arms, 0.25″ from the uppers, 0.25″ from the lowers. Again, Davry lost some of his reach, but none of his articulation was hindered, although his lowest elbow joints are a little sticky. He even retained use of his original hands!

At this point, I had a body with an average-sized torso and short, stubby limbs. I removed the original Ertl neck and sculpted a short stubby one in its place with Sculpey [boiled again]. I carved out the bottom of Davry’s head so that it could just slide over the neck stump. His neck lost tilting action, but, like feet, I consider this an acceptable sacrifice.

As for Davry’s head, I modified it by coloring over the original DiD paint job. I darkened his hair to a vibrant red with dark purple accents. I drew on lightning-shaped sideburns and a goatee in an attempt to make him seem older. I darkened his eyebrows and added bags under his eyes to age him as well. His head was sealed with matte varnish.

Davry now stands about 9.5″ high in high-heeled boots. He’s probably closer to 9.25″ high. Compared to my dolls who represent barely pubescent kids, he is much stockier. He looks young for his physical age, which I put in the upper 30s, but he can’t be mistaken for a kid. He looks rather like a teenager trying to be mature. Unfortunately, his lightning-shaped sideburns don’t help in this department. :p

After Absinthe, Davry is only my second 1:6 body mod. I’m very pleased with the way that he came out. His build looks like that of a person with achondroplastic dwarfism. More importantly, his character has the general personality that I imagine him to have: that of a playful man who doesn’t act his age. 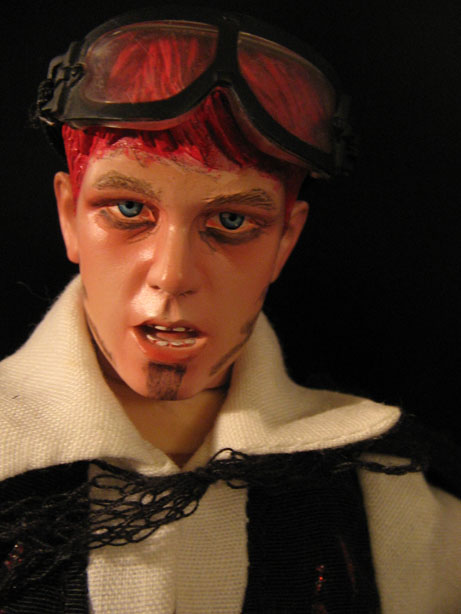 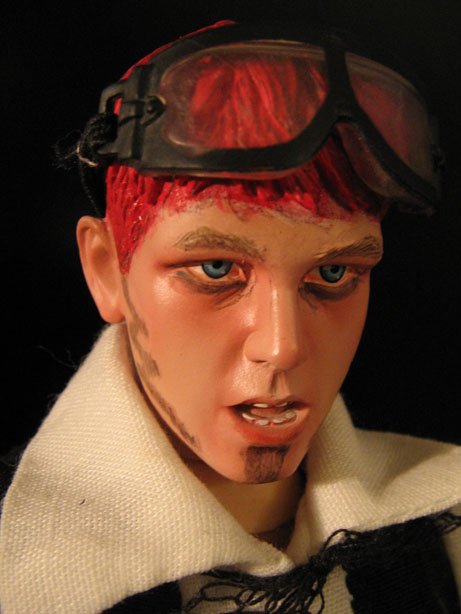 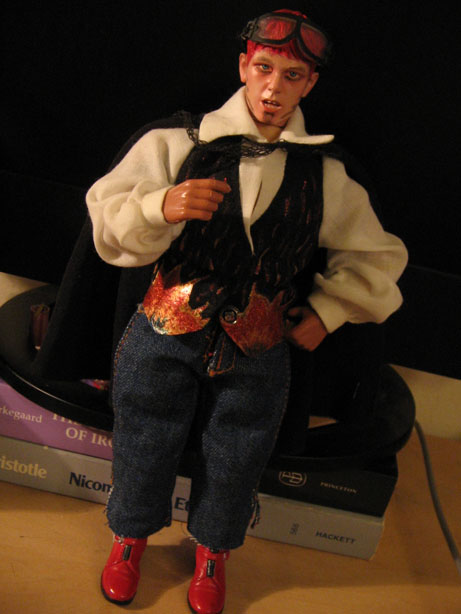 If you mean the body I sent as maybe-Sibley, that was an Ever Sparkle body. Ertl bodies have those weird cut-outs in the backs of the calves.

I like how you’ve modified his face/hair paint, too!