Sadly, Dolls and Friends is closing early in December, so the U.S. loses another reseller of Asian BJDs. Happily for me, all remaining stock is deeply discounted, so I got Elfdoll Kathlen, a 20cm BJD with 2 faceplates [awake and asleep], outfit, eyes and wig, for $221.00 without shipping.  Her original price was $340.00, so that’s 35% off. 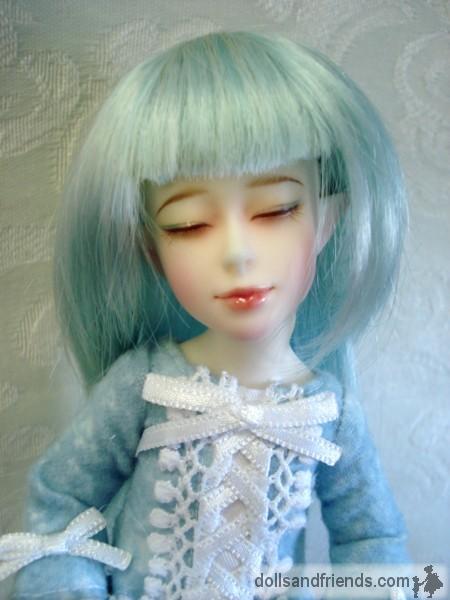 Kathlen, or at least her head, will be the base of my improved Absinthe doll. At first, I used a Soom Uyoo for Absinthe, but Uyoo’s body was too tall and curvy for a character who’s supposed to have the body of a 13-year-old. I also disliked Uyoo’s wide eyes, inappropriate for a dreamy, ethereal character.

My current Absinthe is not a BJD at all, but an action fig with a repainted Sea International fem head and an altered Toybiz fem head. She has the appropriate hair, eyes and height. However, her face looks sharp and old. Her body is also unfinished and ugly under her clothes, which frustrates me because I would like to put her in other outfits besides long-sleeved shirts and pants.

So Absinthe will now have Kathlen’s head. The pale complexion and slight smile work well for the character, as does the face-changing option. I’m not sure what to do about the pointy ears, though. I may just ignore them.

I don’t know what to do about Absinthe’s body, though. I can’t use the plastic one from the current action fig incarnation because, as I said, the plastic one is ugly. Kathlen’s body is too short and slight, appropriate for an 8-year-old character, but not a 13-year-old character [physically speaking — chronologically, she’s around 200!]. I might put Absinthe’s head on a pale [plastic] Obitsu body or create a resin/Obitsu hybrid. I could also modify the Kathlen body and lengthen the limbs and torso, or I could get another resin body and put Absinthe’s head on it. I’ll have a better idea of what to do with Absinthe’s body once I get Kathlen in the mail.

Time to fire up my freelancing powers so that I can earn some extra money to cover Xmas and Absinthe expenses!