So I finally found a use for the Mikelman Candi head that I bought from Andrea a while back. I had intended her to be Cory, but she did not resemble my earlier 3-D renders of Cory, so no dice.

A few days ago, I got into my head that I would like a doll of Justine, the evil leader of the Sods, Will and Absinthe’s former clan. I rendered some 3-D pictures of her and, lo and behold, saw that she looked approximately like the aforementioned Candi head, which, conveniently enough, even had the overdone makeup required for her character. I popped her on to a spare CG 2.0, and she looked convincingly like the portly and powerful Justine.

I then confronted another obstacle: Justine’s hair. I identified some wigs that could be historically passable, but I didn’t feel like paying $15.00 for some hair. So I poked around online, looking for information about historical hairstyles, finally discovering a small collection of photos at Shooting Star History ranging from the 1860s to the 1890s. Of all the styles roughly contemporary with Justine, the so-called "up twist with Spanish comb" looked simplest and most achievable, so I tried to push Justine’s original black rooted hair into a French twist. I failed because it was too slippery.

I ended up sculpting a French twist out of Sculpey directly on to Justine’s head. Then I dunked her in boiling water for 60 seconds to cure the Sculpey. [Note: This is an appropriate amount of time to cure a sculpted hairstyle, even with delicate parts, without it pulling away from the head.] Then I painted it a light turd brown, then scribbled all over it with Tuscan Red Prismacolor, then sealed it with matte varnish. The addition of a few loose hairs around her hairline effectively concluded the sculpted suggestion of hair.

Below are the renders of Justine’s head which I studied in order to find a headsculpt for her. They are hairless to better reveal the shape of her face and skull. There are two of them because the left represents her in Victorian times, when she was arrogant and evil, and the right represents her now, when she is less evil. Below that is a picture of Justine in plastic with her French twist, waiting for her P.F. Albee Barbie walking suit!! 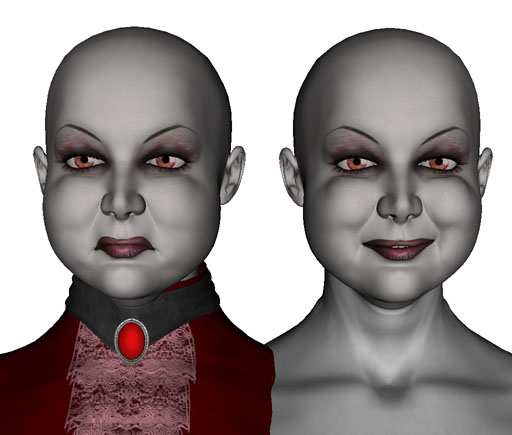 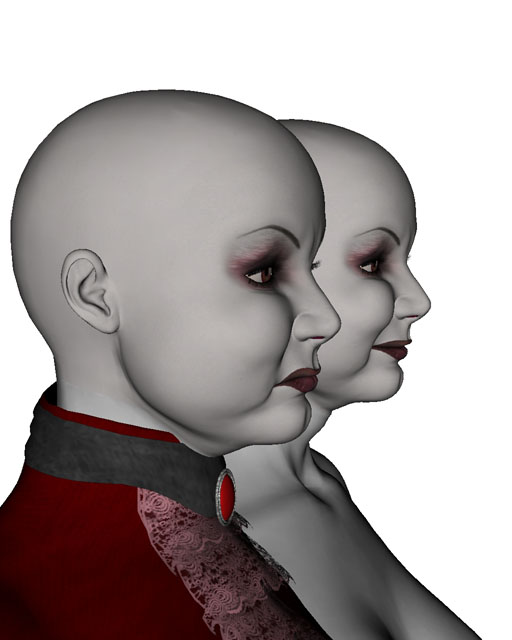 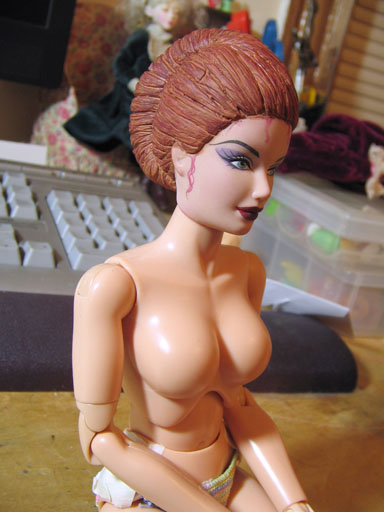 I always thought that head was much more suited to a relatively zaftig action figure body than to a scrawny fashion doll body.

Nice work on the hair, too.