…I found one in my doll drawers…and it’s explicitly a school uniform from a Catholic school, even! Said clothes came with Sideshow’s Dead Babysitter, whose head I used for the indefatigably fabulous Zinnia Pascale. Pictures and 1:6-related blather below.

The outfit hangs well on Michaela, who is a modified articulated Barbie body. I took 1.5 cm out of her upper thighs, replaced her feet with Bratz boots and replaced her original stupidly prong-like hands with hands from a 27cm Obitsu fem. The head is from my CG Kisaragi Honey [which I swore I would never molest] with the bottom gouged out to fit down on the stalk-like Barbie neck. I had to take a panel out of the back of the grotesquely wide skirt [and stitch it up with hideous, sloppy hand stitches!], but, overall, I’m pleased with the final effect. The Sideshow uniform gives the Barbie body some much needed bulk, making Michaela look like a young teenager who is also well-developed. I’m also amused by her baggy tights, an unintended side effect of storing them on an ample CG who I thought was going to be Michaela’s body originally.

Technically, I still put Michaela in the "in progress" category because I have yet to deal with her hair. To be true to her original incarnation, Michaela should have a red flip. I don’t really want to buy her hair when I can approximate a red ‘do by gluing on reddish-brown hair pillaged from a My Friend Becky Barbie, but the prospect of yanking out all of Michaela’s current hair and gluing on another chevelure just fills me with ennui. Part of me wants to keep her blond.

In summary, why did I drop $28.00 on a Triad outfit that wasn’t even really what I wanted?! Bahooey. I don’t think I’ll be buying from there again. Maybe Will can wear the incoming Cadence. 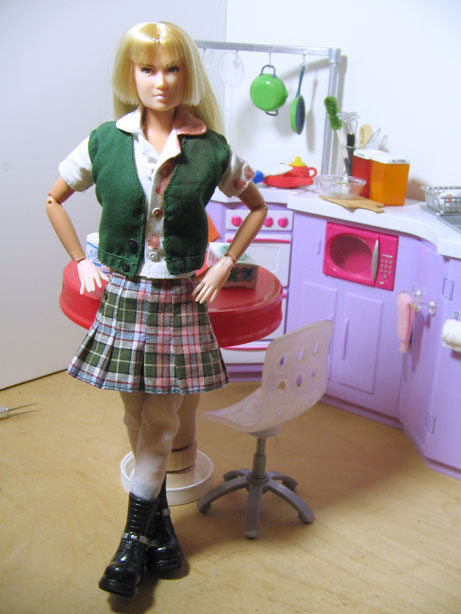