I had an extra Obitsu upper torso and arms from a 21cm [?] doll, so I tried to create a torso with more toddler-like proportions. The first photo shows what I started with: the default. The second photo shows what I ended up with. I don’t know what brand the head is, but I amputated 0.5" in height off the scalp and altered the paint job by Andrea. I removed the eyebrows, recolored the eyes green with black pupils and gave some more definition to the lower lip. I do not know how tall Geordie will end up being. 6" would be acceptable, but I would like to get in the 5" range, perhaps even 4". It all depends on the legs. I wonder where to get some.

Need to sand the chest.

EDIT: I should mention that, in order to get Geordie’s arms short enough, I had to sacrifice the upper arm swivel. Thus her elbows will always be pointing toward her back. But, since she still has all original shoulder and wrist articulation, I felt that this was an acceptable trade-off. I do, however, regret her loss of ability to put her arms akimbo, a characteristic pose for almost all of my characters. 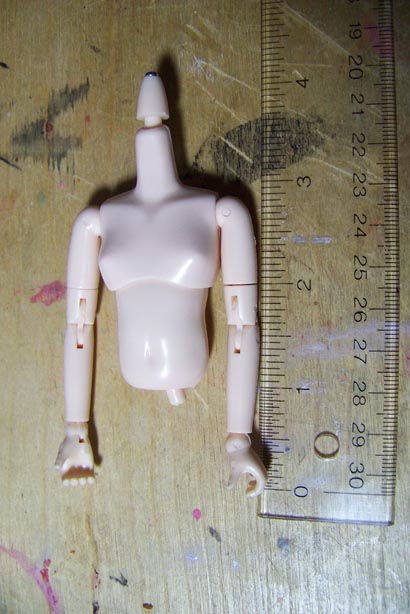 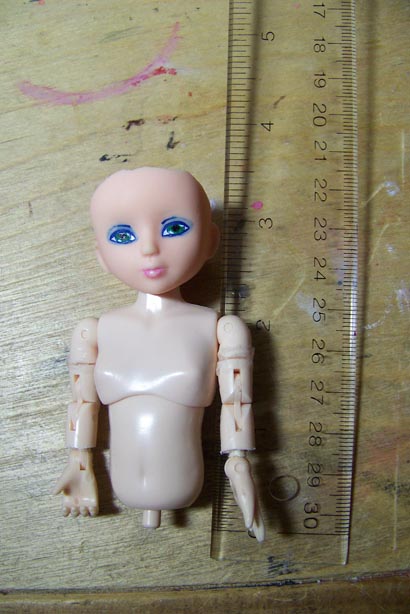 Wow, that is looking *good*. I’m totally going to experiment with this method once I have some extra cash. There’s almost no visual indication of the altered proportions at all. Looks like it was manufactured that way. 🙂