I don’t want to rehab the Pocahontas doll from scratch for such a minor character. I got the idea this morning, though, to recycle LHFer Andrew into Sylvia.

Andrew has a long history. Back in 2002 [!], I picked up a 12" talking Kelly Osbourne doll, made by Fun-4-All Corp., and stuck her head and hands on a male action figure body. She became Andrew, one of my first trans characters. Around the same time, Andrea did similar head transplants with her own talking Osbourne dolls, including a Sharon and a Kelly of her own. She sculpted out some curves on the base bodies, though, which I did not. I eventually got rid of my messily done Andrew, but missed her greatly, so I ended up acquiring Andrea’s Kelly bash, who became Andrew 2.0. See her below: 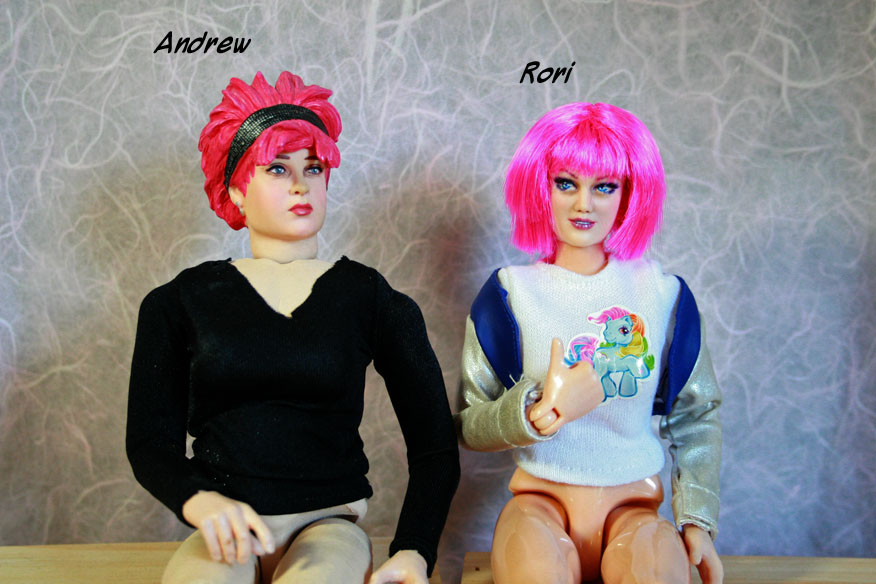 I love Andrew because a) she has PINK HAIR and b) she’s fat. Her headsculpt shows a full, square jaw and heavy chin, features that rarely appear on female dolls of this scale.

My current plan for Sylvia has two steps. One involves modifying Andrew’s head, removing the molded hair and replacing it with fiber. I will probably end up enhancing her faceup too. The other step involves modding Andrew’s body. She definitely needs her legs cut down, as they are too long and gangly for her frame. She also needs more fats on her thighs…and on her upper arms too, if I can figure out how to sculpt them without sacrificing the swivels.

I see that other talking Osbourne dolls from the same series are available on Ebay for <$15.00, which makes me want to get another and make similar mods. MORE FAT DOLLS!!!!!!!!!

This entry was originally posted at http://modernwizard.dreamwidth.org/1573116.html. You can comment here, but I’d prefer it if you’d comment on my DW using OpenID.