Epona is a customized 1:6 scale action figure that I purchased in 2008 from Therese Olsen. She represents a period in Therese’s dollmaking when she was moving away from mere customizing and into wholesale doll construction, a move that ultimately led her to sculpting her own resin BJDs. Therefore Epona interests me as an aesthetic object and also as a historical example of my friend’s doll development.

As you can see from the photo above, Epona is a satyr. She started off as a Takara Cy Girl 1.0 with the CG01 headsculpt. Therese rerooted her, repainted her face and did extensive body mods. She removed the CG01’s human ears and replaced them with equine ears made of leather. She added upper arm swivels to both arms as well. She resculpted the torso to have small, realistically hanging breasts with nipples, then added musculature and a tail [not shown] around the hip section. She also bulked up the thighs and modified the lower legs to be hooved and articulated. Finally she painted the entire figure with a yellowish-tan base and dapples along the limbs, with grey lower limbs and tufts of hair around wrists and ankles.

I love Epona, but, ever since I got her, I have wished to improve her. Her sparsely rooted hair shows her scalp. Her arms don’t sit closely against her sides, and she only has about 90 degrees of flexion at her elbows, which really limits her poseability. Finally, her paint job renders her susceptible to wear and chipping, especially around her neck. In short, she’s not as playable as she could be.

Today I embarked on a quest to improve Epona. I cropped her rooted hair, but could not pull it from her head, as it was held in there with glue and paint. I thus painted the stubble around the forehead black and made a faux fur wig of the same color. I have not tested to see if this works.

While waiting for the paint to dry on her stubble, I disassembled Epona’s body. She has strung arms and upper torso, so I cut the elastic and rendered her into pieces. 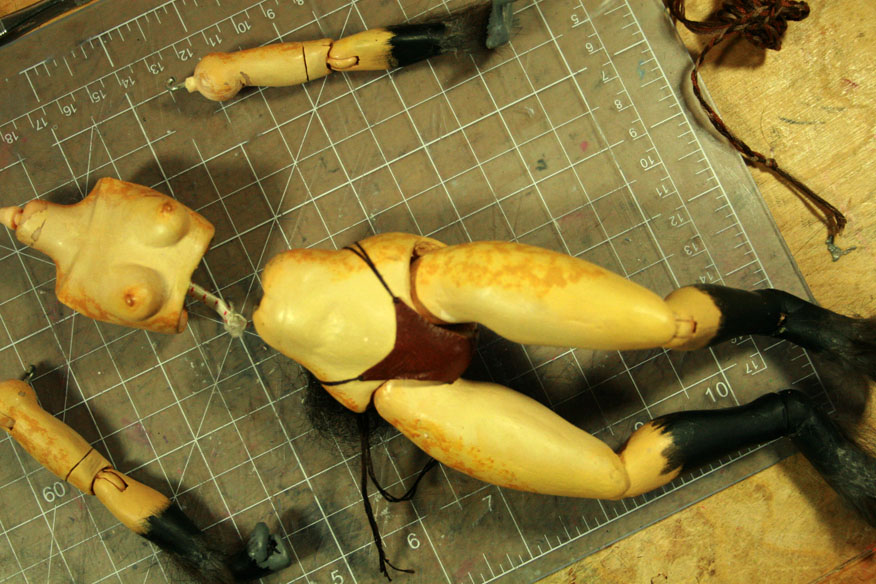 The photo above demonstrates her partly strung construction. A single loop of elastic pulled together each of her arms through the shoulder sockets, then looped around a bar in the abdomen, keeping all the pieces together. The tail of the elastic, sticking out below the chest piece, shows you just how thick it is — at least 3, if not 4, mm. I don’t even string my 1:3 scale folks with 4mm — it’s way too tight. After piecing out Epona, I realized that the thickness of her elastic was the partial cause of her impeded flexibility.

I also realized that she would not reassemble easily. There’s no simple hollow upper torso as in a BJD; instead there are some sort of washers and cinchers in both the bust and the abdomen. I cannot see through the bust piece at all to the shoulder sockets, which makes me wonder how Therese strung Epona in the first place. I guess that she separated the front piece of the abdomen from the back piece and the same with the bust piece. She then strung the arms and body together and then rejoined the front pieces with their backs using Aves Apoxie Sculpt. In any event, it’s a jerry-rigged solution constructed with functionality in mind, not customizability. 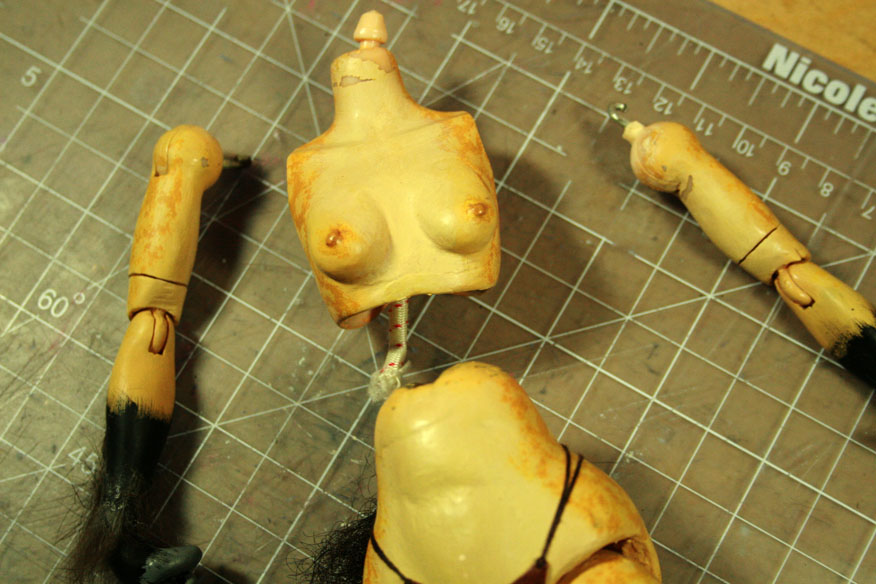 Better view of the hooks in the arms…also the wear of the paint around the neck.

At this point, I’m wondering what to do with Epona. Clearly I’ll never be able to return her to her original state, nor do I want to. But what should I do with her now?

My options break down according to how much of her original form I want to keep.

I’m currently weighing options 2 and 4. Option 1 is less feasible because I don’t have a good idea of how to execute it. Option 3 just seems silly — I mean, really — if I’m going to go most of the way into resin, why not just go ALL the way and make her a full BJD?

The deciding factor between options 2 and 4 is my attachment to Epona’s original form. Hmmmm…

This entry was originally posted at http://modernwizard.dreamwidth.org/1603654.html. You can comment here, but I’d prefer it if you’d comment on my DW using OpenID.

She really is cool — I’ve been watching your updates with interest!

She really is cool — I’ve been watching your updates with interest!