I recently did a trade with fellow Figurvore member Silent G/Will, who was kind enough to provide me with a pair of double-ganged Hot Toy fem arms to sub in for the Playtoy XL’s single-jointed ones.

As the shoulder balls on the HT arms were smaller than the Playtoy sockets, he also nicely suggested that I should coat the HT balls in petroleum jelly, squirt hot glue in the Playtoy sockets, then stick the HT balls in the sockets, squiggling them around till the glue dried. The petroleum jelly would then prohibit the balls from sticking to the glue, and the glue layer would fill the extra space in the sockets, making a snug fit for the balls! I’ve been using hot glue as a filler/tightener for years, but I never thought to add petroleum jelly to prevent the insertions from adhering to the holes in which they are inserted. 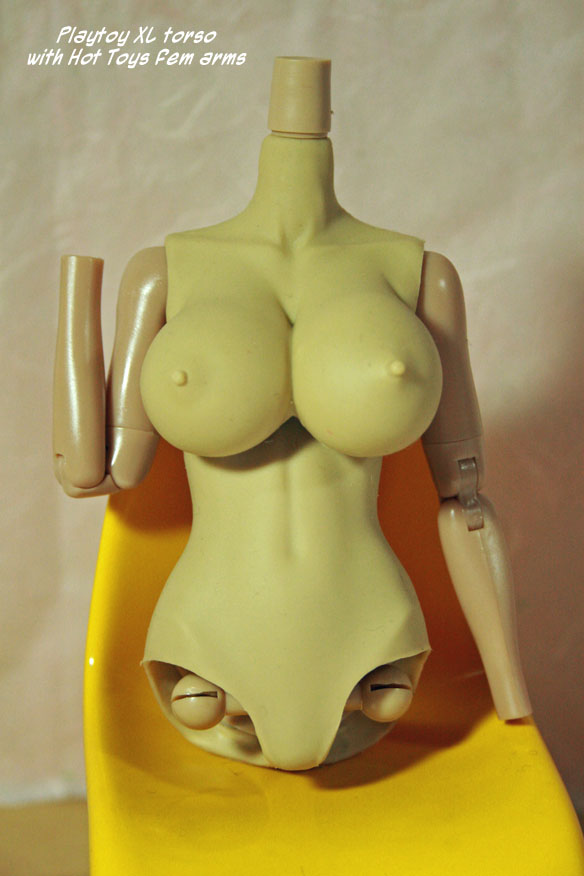 I have two major problems with the current set-up, however.

1. The arms look way too slight and delicate for the strong, robust physique I seek. In comparing the HT arms to Takara CG arms and also Obitsu Slim Male arms, I discovered that all three sets are the same length, with upper arms of the same diameter and elbows at the same location. The only difference is that the HT arms have narrower forearms than the Takara CG and Obitsu Slim Male arms, yielding smaller wrists. And those narrow forearms are just unacceptably narrow for this project.

Not sure what to do at this point. Takara CG arms don’t have the same degree of flexion as the HTs, and the Obitsu Slim Male ones don’t have enough definition. I could go with DML male arms, but those make really annoying clicky noises. Maybe Obitsu Regular Male arms?

2. The skintone is revolting. The lack of pink undertones means that there’s no color associated with circulation, life and/or health. The grey/green remaining tones would be great for a really sick person, but I have never regularly encountered people with prominent grey/green tones and no pink tones in their skin. I mean, look at the HT arms — the red undertones move them from the "eldritch & sickly" category to the "realistic & human" category. I don’t know why Playtoy is hopping on this bandwagon of skintones worthy of zombies.

I’m leaning toward a repaint, especially since I really like the flexibility of the cleavage and the piercing potential for the nipples.

This project is becoming more complicated than I expected….

This entry was originally posted at http://modernwizard.dreamwidth.org/1608640.html. You can comment here, but I’d prefer it if you’d comment on my DW using OpenID.