Here’s Jennifer in progress. She’s supposed to look similar to me, but younger, rounder and blunter in the features. I took the digital me that I had made, fattened and rounded the face, plumped up the lips, widened the mouth, enlarged and rounded out the eyes and snubbed up the nose. 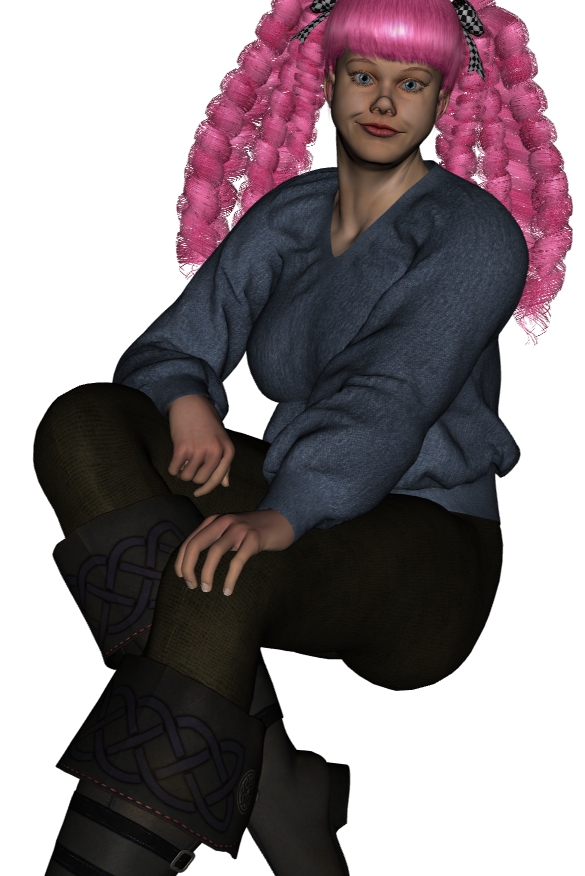 Body is Daz’ freebie Genesis base figure, shaped with basic included morphs, as well as Jabba’s freebie Pinup Girl and freebie Junk in the Trunk, some of DieTrying’s 182 freebie morphs ported from V4, a few of RAMWolff’s copious freebie Genesis morph package, all topped off with ChestSpandex morph ported from V3 and imax24’s Breast Spandex for V4 Second Skins morph ported over to Genesis. Head is from is Daz3D’s Victoria 4.2 base, with V4 Morphs ++. Head morphs are from V4 Morphs ++, Capsces’ Morphia, DieTrying’s 182 freebie morphs, RAMWolff’s massive freebie package of  morphs and probably some other ones I forgot . Skin texture is rebelmommy and shellyw’s RBSD V4 MerchantBase.

From top to bottom, the outfit consists of Wilmap’s freebie Blouson Shirt, pants from Daz/MAB/WillDupree’s Journeyer Scout for M4 and boots from the same. Pose is a casual seated one from one of Poser 9’s defaults, tweaked by me. Background by me.

The crowning jewel of this render is, of course, the hair — Studio Maya’s Spiral Twin Tail. This bright, boingy style first came out as a freebie eons ago [as far as Daz/Poser time is concerned], primitively sculpted, without morphs or posability. Its initial permutation, modeled below by the protagonist of my Library of Intellectum story, looked like this: 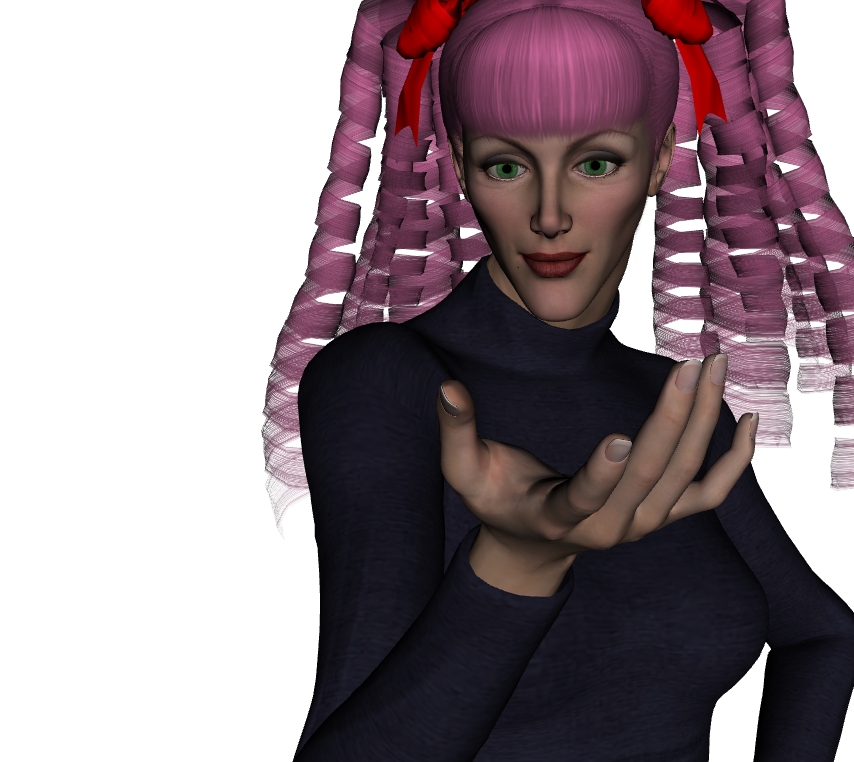 Since I like collecting free digital hairstyles [it’s like amassing wigs for dolls], I wanted to download the free Spiral Twin Tail to stick on Jennifer. Studio Maya has removed his many freebie hairstyles from his site, however, especially since he has updated many of them and offered them for sale. Therefore, while I could not download Spiral Twin Tail 1.0, I did discover that 2.0 was available for a measly 600 yen on his site. When I saw that it was a beautifully sculpted improvement on 1.0, with softer-looking curls, more realistic textures and an array of posing morphs, I sprang for it. Best $6.06 I’ve ever spent. It sure doesn’t hurt that it looks like the pink wig I have either… ^_^

This entry was originally posted at http://modernwizard.dreamwidth.org/1625533.html. You can comment here, but I’d prefer it if you’d comment on my DW using OpenID.