Allyson’s [step]sister and roommate! All dressed up to go to the fair! [She does not do what she calls "the kinky thing."] 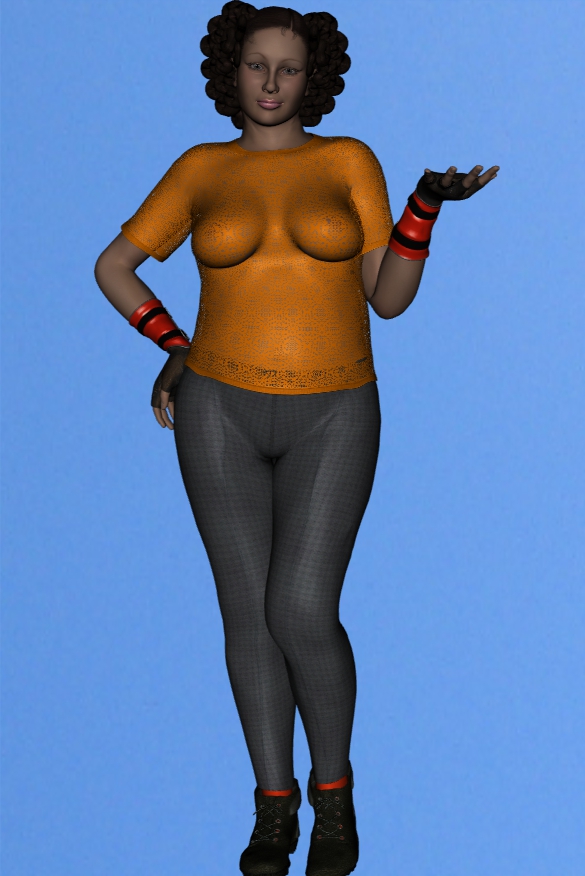 Felicia is a Genesis base figure with rebelmommy and shellyw’s RBSD V4 MerchantBase for a texture, tinted by me to be slightly darker. Morphs include some included in the Genesis base, such as Heavy and Pear Shape, the V4 clone shape ported from Victoria 4 with GenX and a blend of some of RAMWolff’s freebie character head morphs. From top to bottom, she has MayaStudio3D’s freebie RollHair2 for Vickie, the K4 Basic Wear T-shirt that came with the freebie  Genesis Starter Content shaded with Wilmap’s Lace Designs 2 and tinted by me, Mech Girl for A3 gloves by the3dwizard  latexed with my favorite Latex/Rubber Shaders for DS by Sickleyield and Fuseling, the M4/H4 Journeyer Scout Pants by DAZ/MAB/WillDupree that came with the freebie Genesis Starter Content and, finally, boots from Daz/Lourdes’ Shadow Dancer for V4. Pose from Daz/Ravenhair’s Carhop for Genesis Female. Background from a photo by me.

This entry was originally posted at http://modernwizard.dreamwidth.org/1634780.html. You can comment here, but I’d prefer it if you’d comment on my DW using OpenID.