Polly, my 1:6 scale mermaid BJD, arrived some time ago, but frankly I was too distracted by shiny digital models to do a proper box opening. I have, however, been working on her slowly [in between gazing with adoration at digital models]. Pictures below.

NB: Polly’s head is not original to the body. She is an Elfdoll Kathlen sleeping headplate that I have modded and hybridized with the merbody. 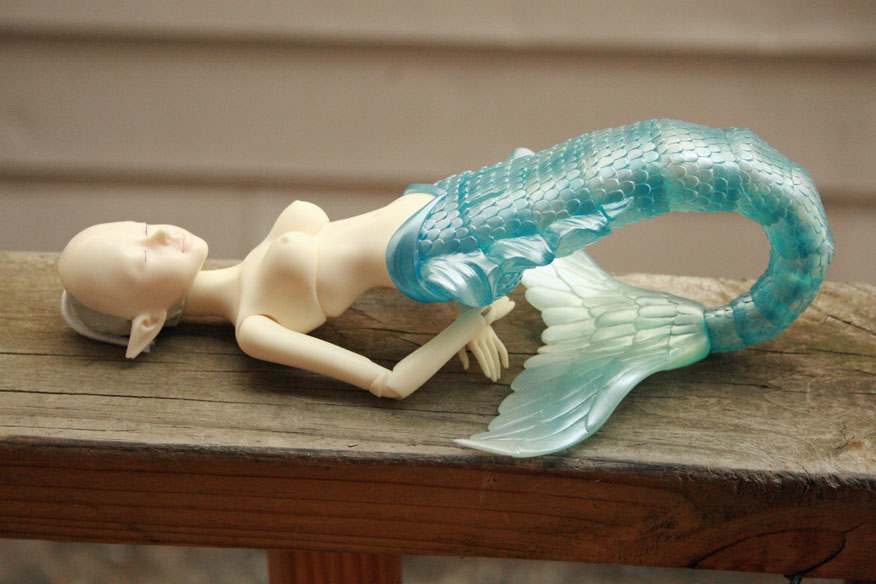 Polly is a mermaid created by Asleep Eidolon and Xagadoll. AE sculpted the merhead [not shown because I dislike it and am not using it], fish tail and wings [?!], while Xagadoll provided the human torso and [optional] human lower half. Just as Soom has become the BJD company best known for making dolls with hooved legs and horns, AE has established a reputation for meticulously detailed and wonderfully articulated merpeople. Check out the jointing in that tail! Polly has deep channels where her thigh sockets would be, allowing her to sit up at a 90-degree angle, so she will fit securely into her wheelchair. 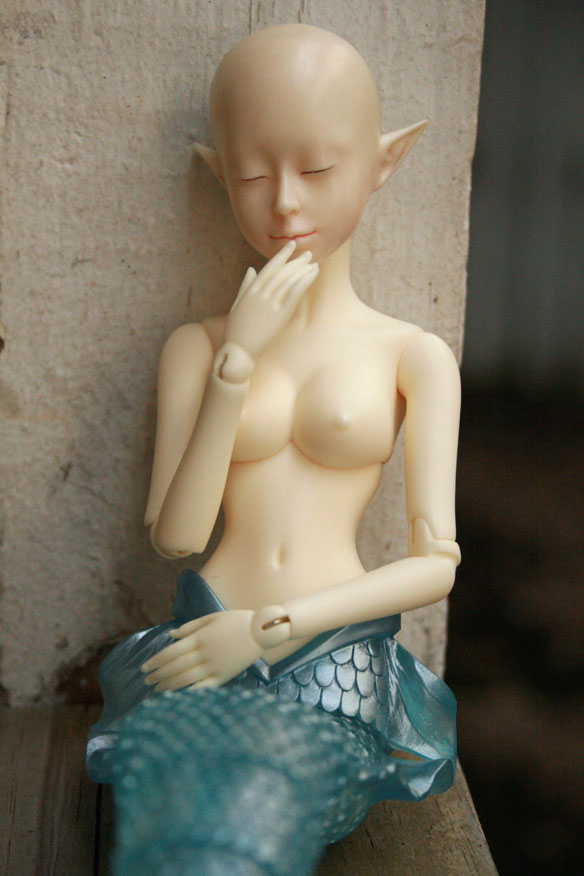 This is my first encounter with Xagadoll, and I wish all 1:6 scale mature BJDs featured such beautiful and functional sculpting. I find the arms a little scrawny, but their double-jointed elbows allow Polly to touch her face without any wiring on my part. After years of dealing with beautiful, but single-jointed, Soom Faery Legends and Minigems, as well as Lumedoll Lumelights, I greatly appreciate double-jointed arms. 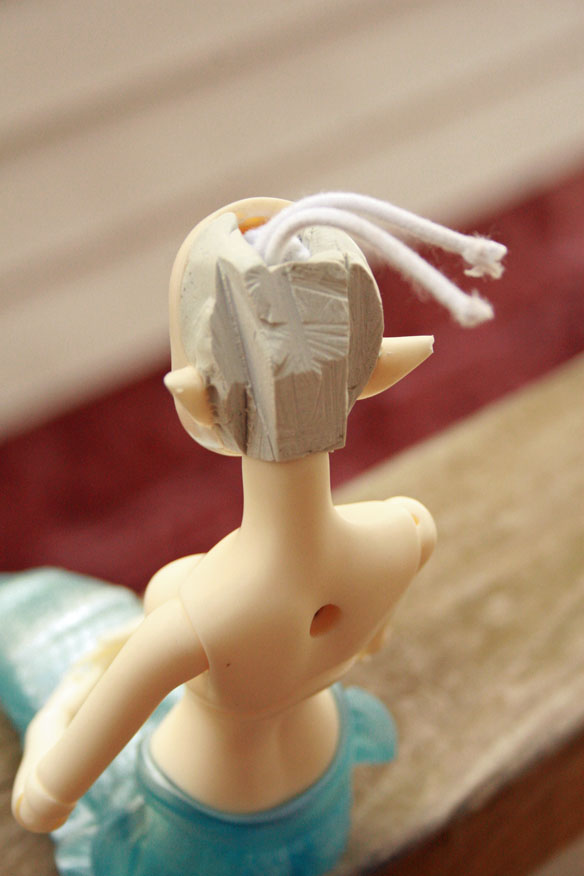 I stated earlier that Polly’s head began life as an Elfdoll Kathlen sleeping plate. Both headbacks that she would have fit on are currently used by Isabel and Carter, so I sculpted Polly a headback of her own. Her sleeping eyes, which needed no insertion of eyeballs, made my job easier, as I did not need to make the plate and back separate pieces.

I just improvisationally added Aves Apoxie Sculpt to the rear of her faceplate, enough to mount her faceplate on and fill out a wig. I made a neck hole on the small side, reaming it out the socket later so that her head settled at the correct height on her neck. Because I added too much bulk on the lower back of her skull, I hacked much of it off with my hand saw [ref. right angles]. In comparison with the heads of my other 1:6 scale mature BJDs, Polly’s makeshift head seems to be the correct height, width and depth. I bet that any small variances can be disguised by the addition of glued-on faux fur and a wig that goes at least to her shoulders, hiding the join between head and neck.

I note with some regret that Polly’s ear has chipped, presumably during the rough handling of hacking her head to size. I may use the opportunity to remove her original ears and replace them with the blue finny ears that came with the default merhead. Not sure about this, though.

This entry was originally posted at http://modernwizard.dreamwidth.org/1637169.html. You can comment here, but I’d prefer it if you’d comment on my DW using OpenID.