For my next photography session in the dealer room, I took pictures of some items donated for the charity raffle, proceeds of which benefitted the Humane Society of the United States. The raffle doll I most wanted to see, a fullset Loongsoul Gong Gong God of Water with an impressively long sea serpent tail, hid out safely in his box, so I consoled myself with shots of other interesting options.

DollZone Virgil head, donated by Mint On Card. I used to think DollZone produced some of the ugliest BJD sculpts, but, over time, their style has become less plate-faced and infested with oversize features, so I’m really liking some of their sculpts these days. 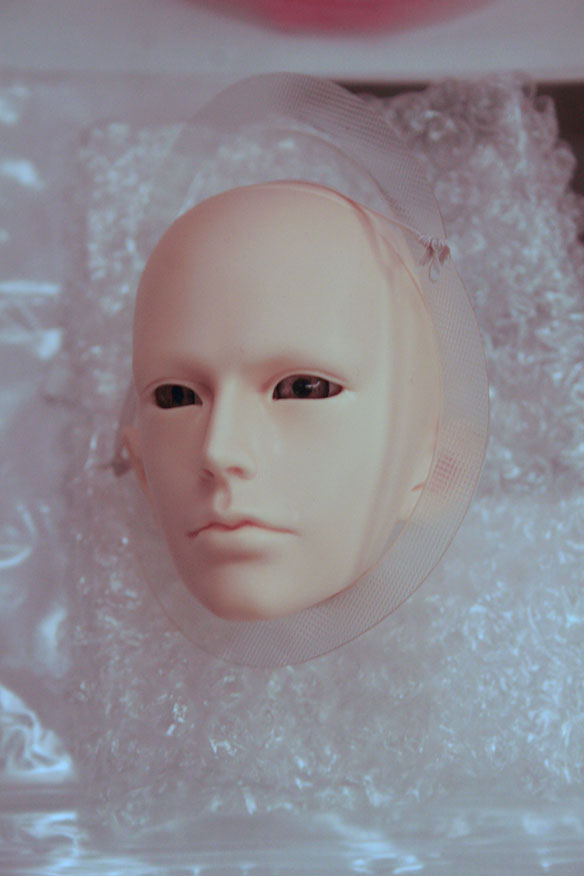 Ruby Red Galleria Honee B "Fun with Cherry Blossom" fullset, donated by Ruby Red Galleria. I don’t usually like toddler dolls, but I find Honee B charming, especially since, upon seeing one in person, I realized that she is just the size of a 1:6 scale toddler [in case I need any in my serial melodramas]. I also found the company reps sweet and welcoming both in room sales and at their booth, so I’m sure their attitude influences my new favorable feelings towards their doll. 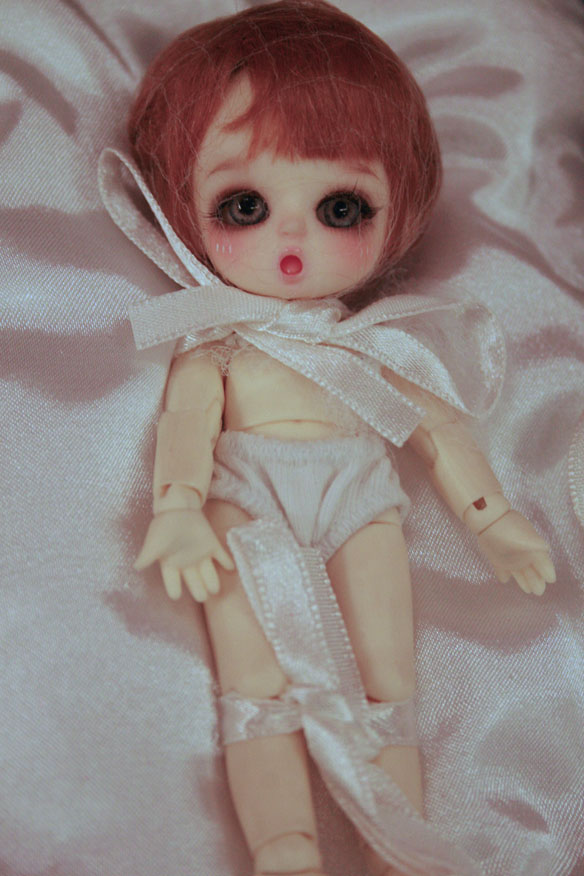 I’d never heard of this doll: Cookie, sculpted and clothed by the Trinket Box. Clearly displaying a North American BJD aesthetic, rather than an Asian one, she looked out of place among all the Asian ball-jointed dolls. She did, however, have a certain odd, awkward charm. More about her later… 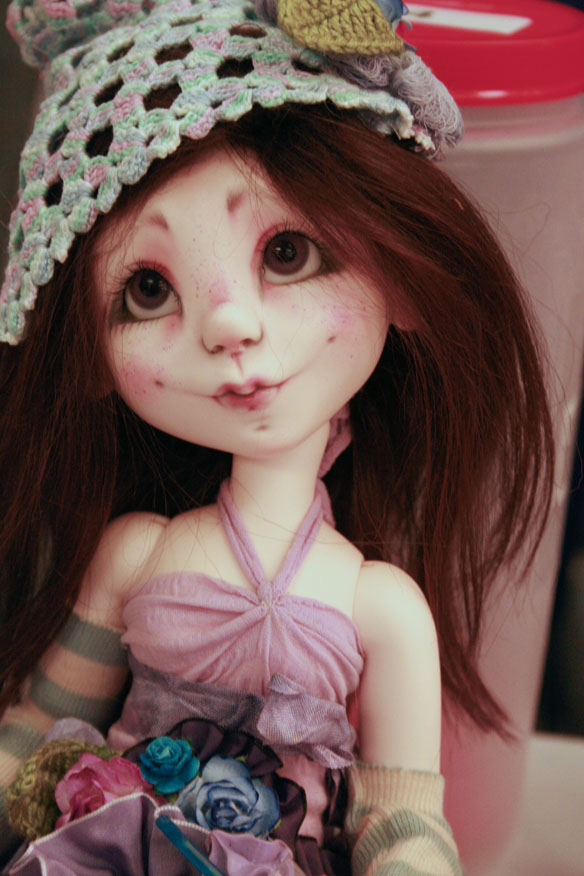 Aimerai Doll, a recently formed artists’ collective, showed off their Oz line of BJDs, based on characters from L. Frank Baum’s famous series. I really liked that the artists went for less well-known denizens of Oz, like Scraps, the titular character of The Patchwork Girl of Oz, and Jinjur, antagonist of The Marvelous Land of Oz. They’ve been paying attention to their source material. I also liked comparing finished executions to concept art, also on display.

From top, Scraps, Jinjur and Glinda, each followed by their concept art. 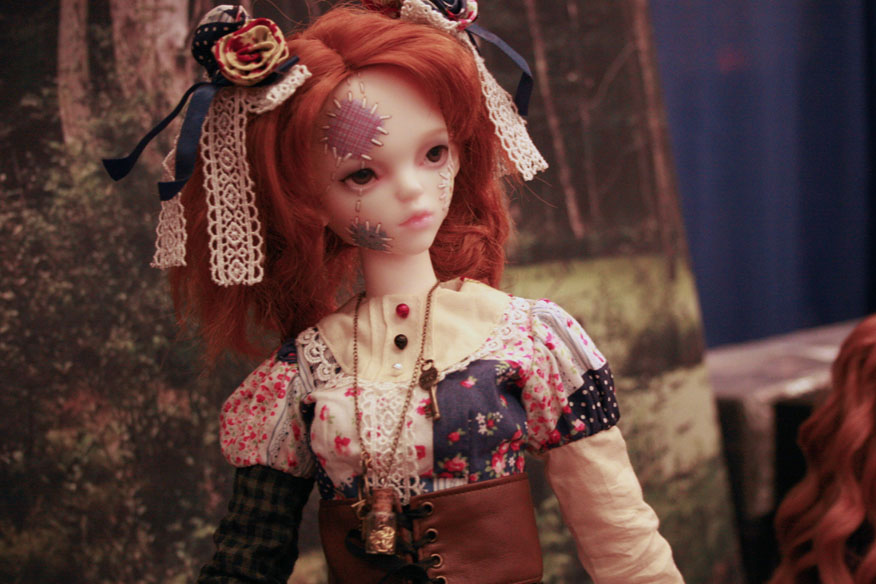 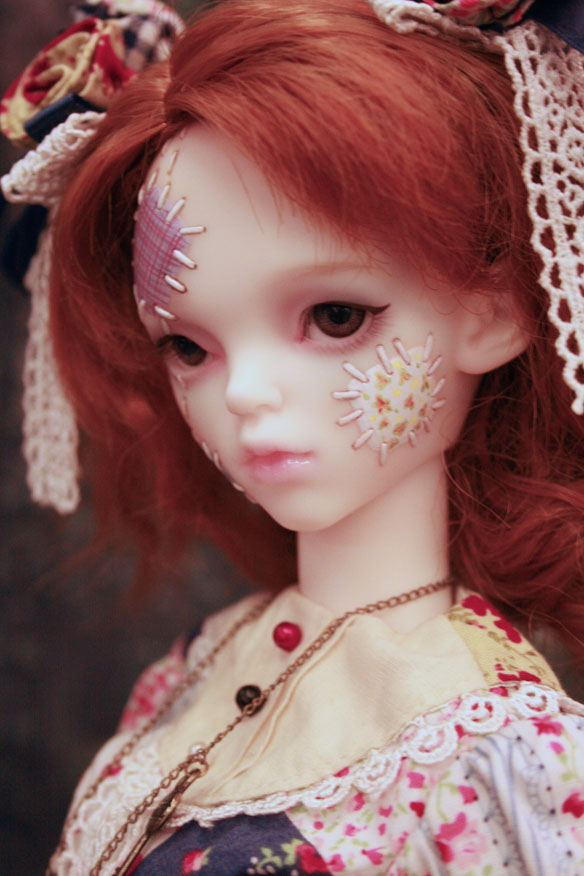 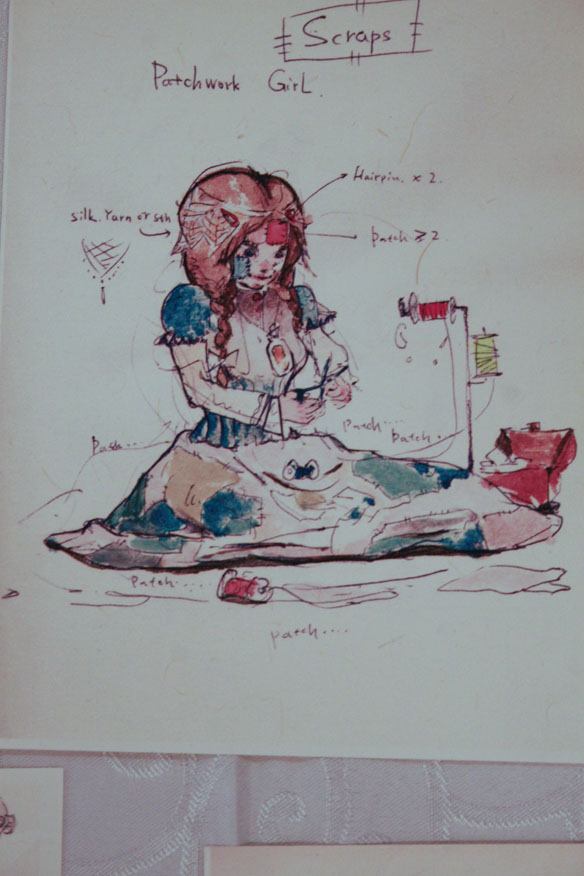 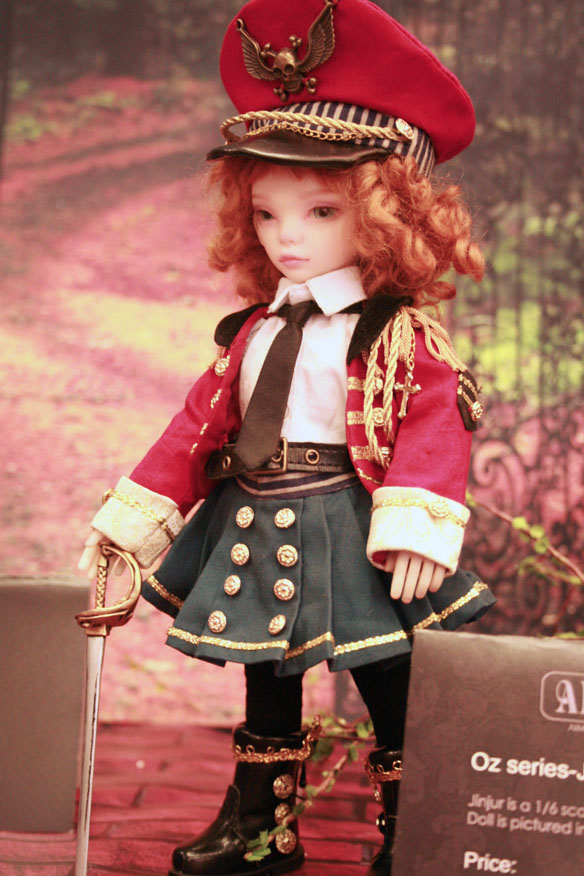 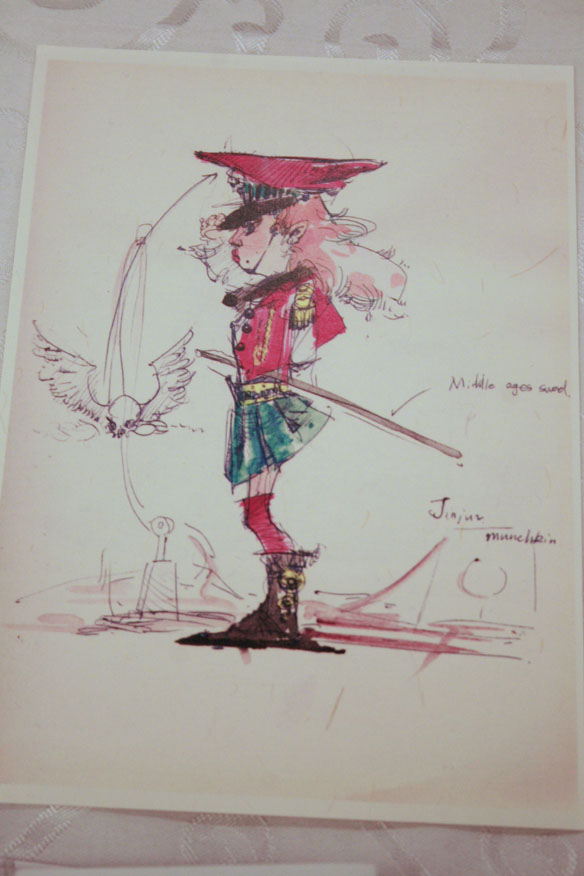 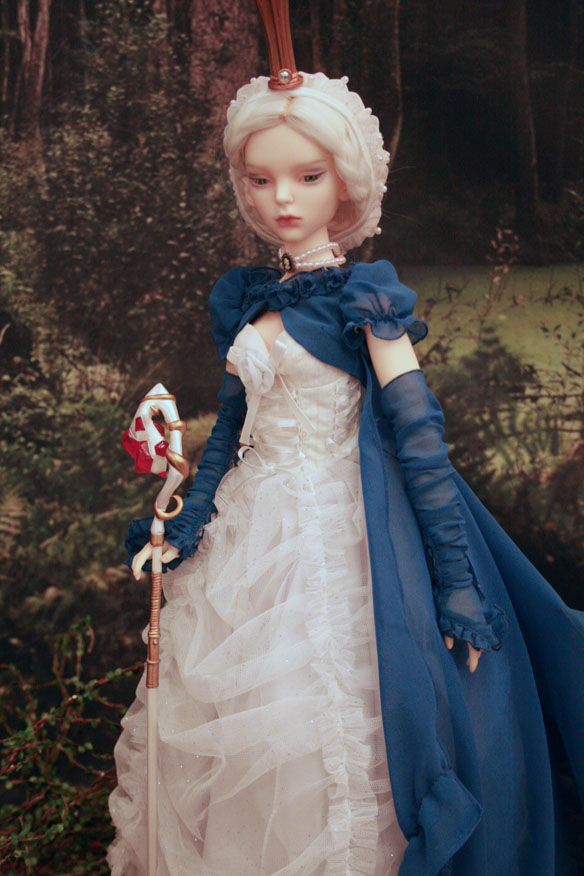 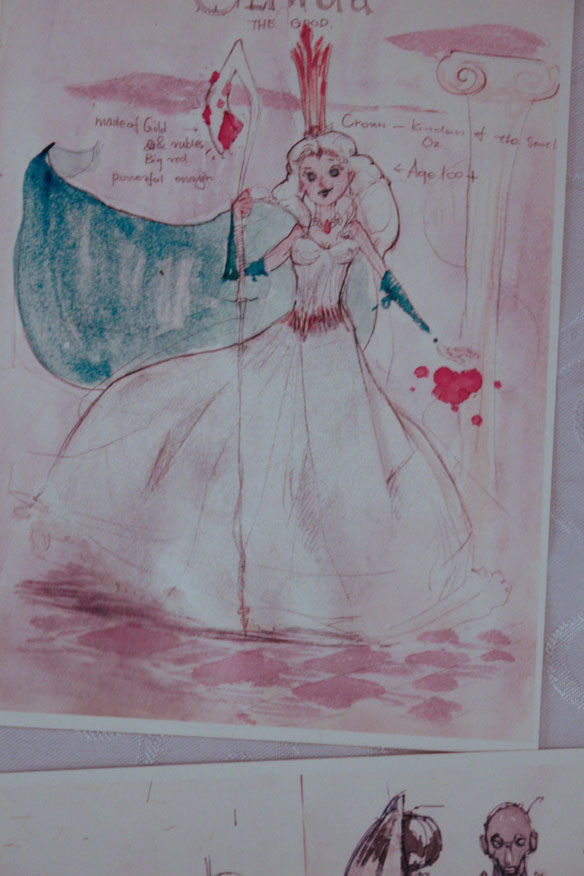 Saishi and her friend both had strollers in which they transported their DollMore Lusions, plus smaller BJDs. None of my photos of Saishi’s friend’s dolls came out, but here’s her Twigling Ingenue on left, sitting with her DollMore Lusion Lilia on right. Finally, a Lusion sculpt I actually like! Lilia reminds me of Jumeau’s classic bébés, only cutesified. 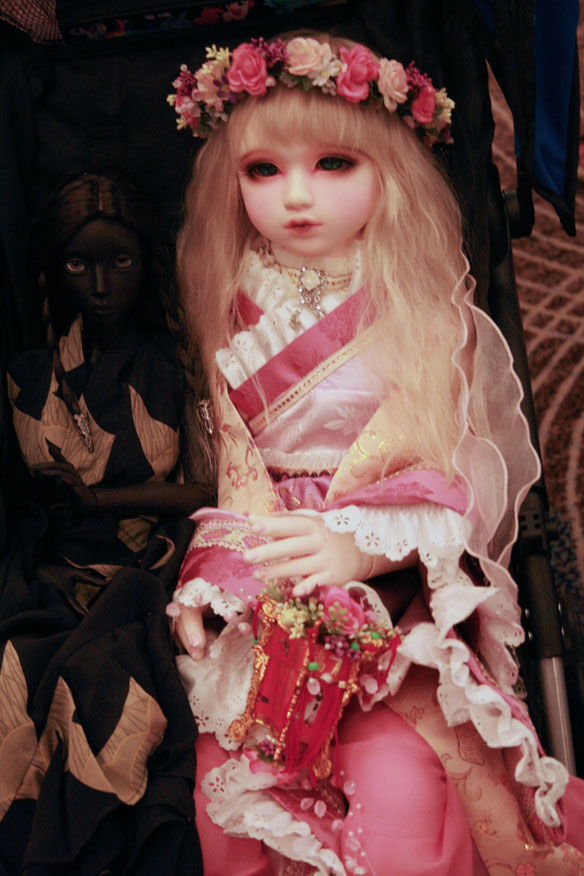 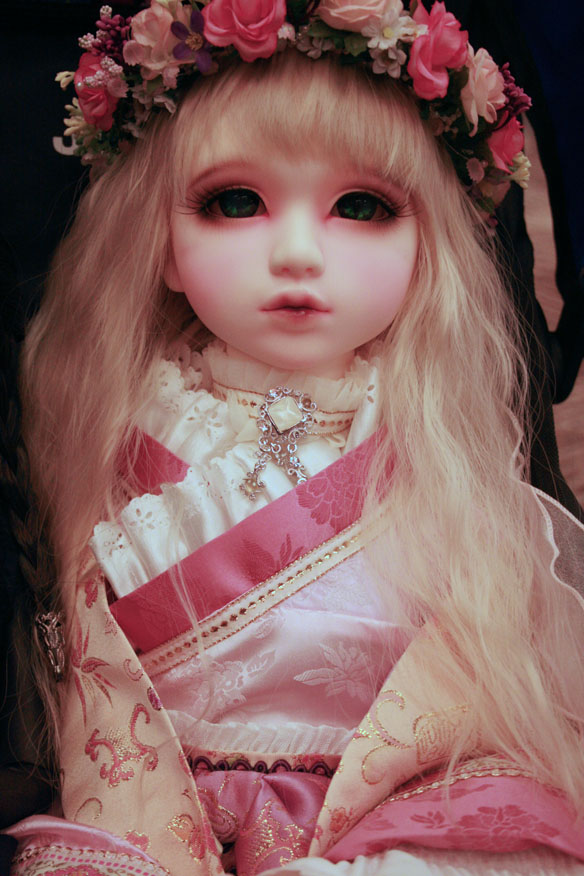 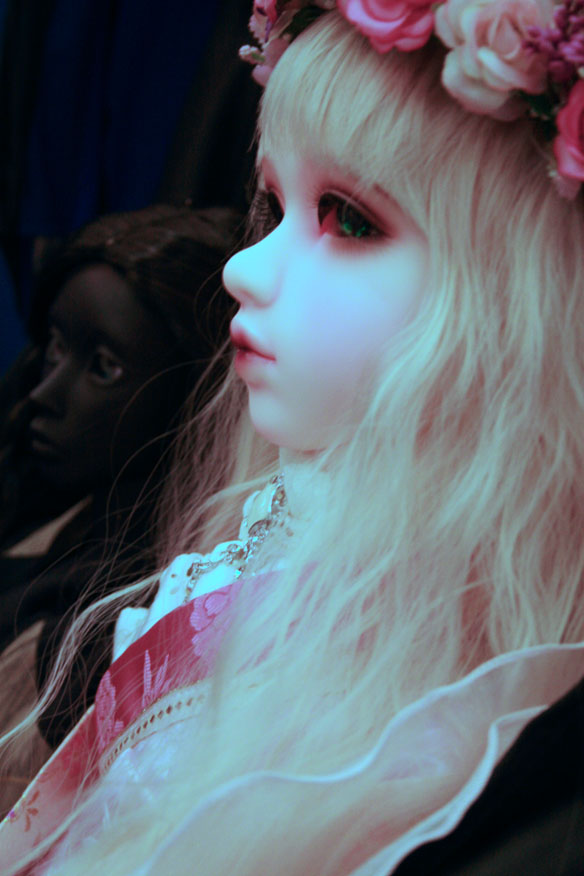 I wandered over to Mint On Card’s booth and took a picture of Xagadoll Lara in NS, a mature 1:6 scale doll that I used to be interested in. My interest has dwindled now, though. I like the Xagadoll body, in evidence on Polly, but Lara’s head is just too large and neotenic for her body. 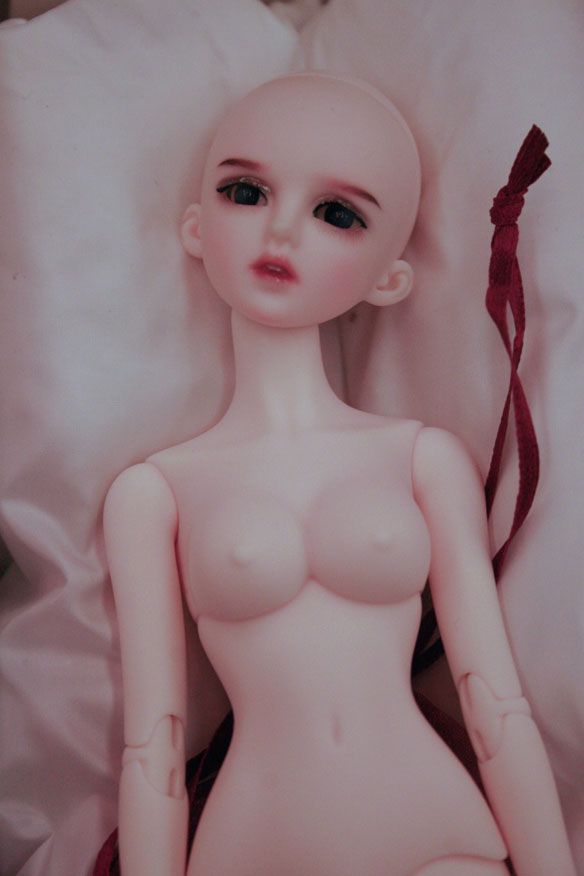 Doll Chateau is adding extra neck and limb joints to a broad cross-section of their dolls lately. Their stylistic experiments also extend as far as armor-like flourishes actually sculpted into the bodies, as seen below in this WS Dolores. Very weird, but I like it. 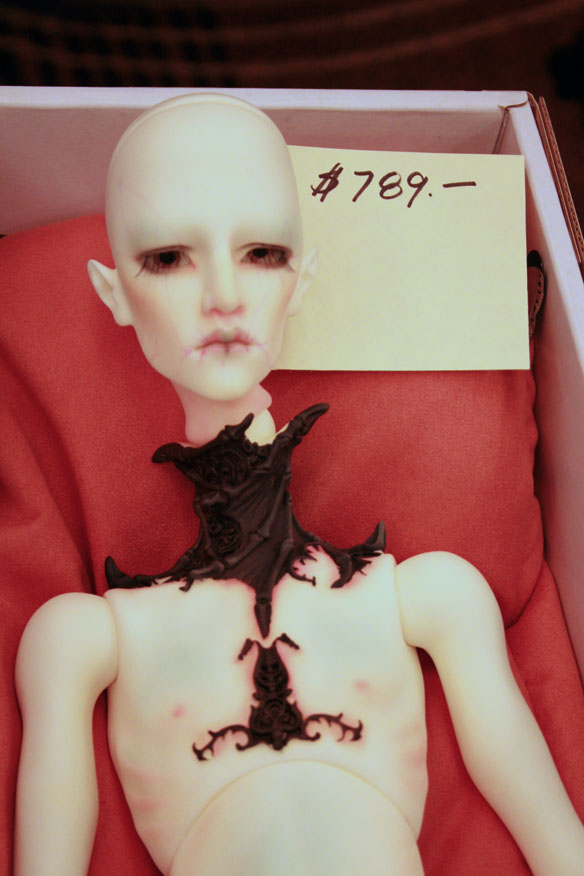 At the DollMore booth, I saw a Trinity Elysia [who I used to lust after before they released Claire] in person. Have I mentioned that I really want a Dollmore Trinity? 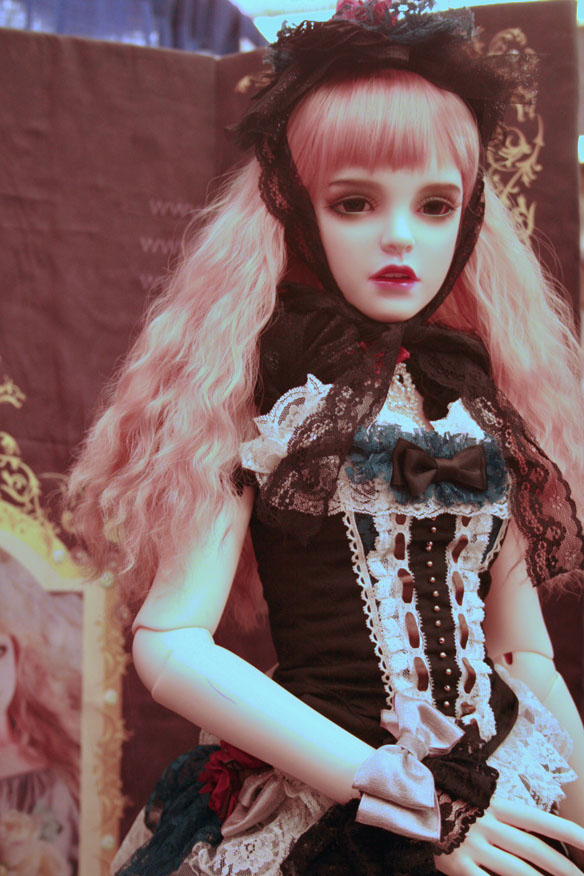 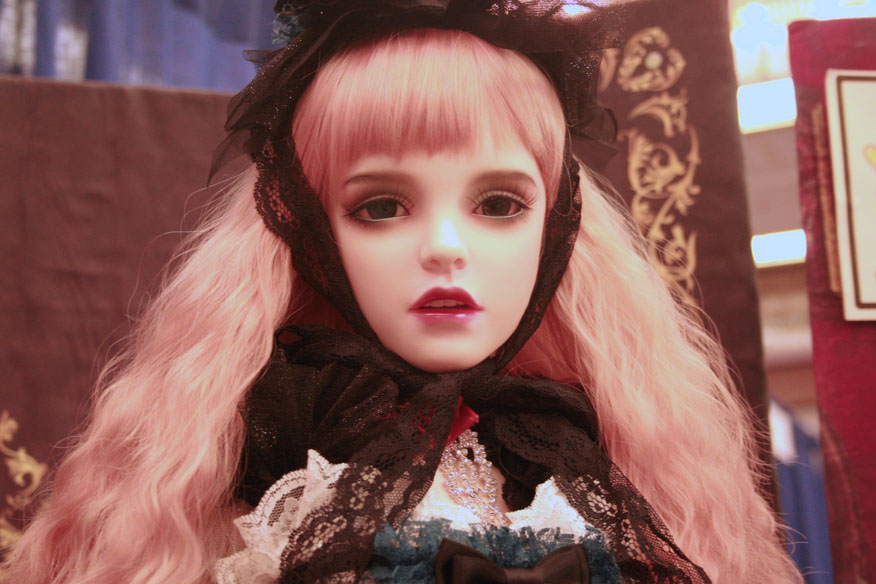 Also dsplaying himself was Nayuta Kenza from their Glamour Model Doll line, Blue Epoch Tattoo limited edition. Someone lavished a lot of artistry and technical know-how on that body painting, but I myself would have some reservations about putting him naked on my shelf. 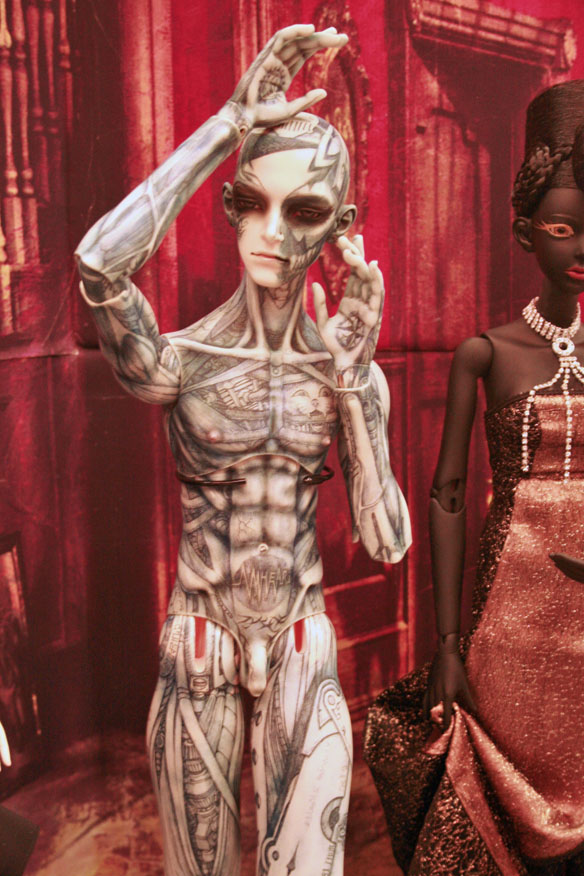 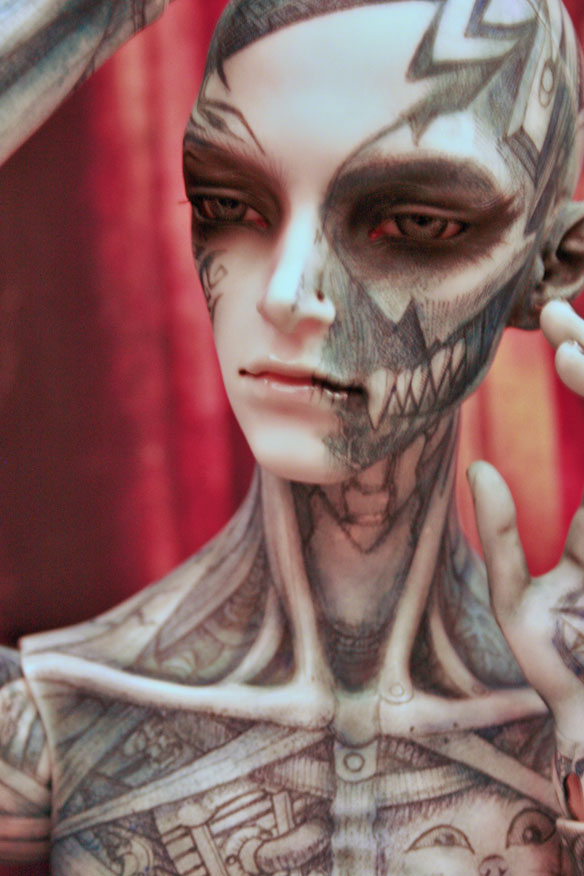 On my way out of the dealer room, I crossed paths with Kitty Fields, who was not only dressed like a robotic character [Rei from Neon Genesis Evangelion??], but also toted several BJDs on the same theme. Naturally I had to get some photos.

Below, her Batchix Machina Alpha, WS resin, but overpainted with gold, and her Lee-el Tin Man. 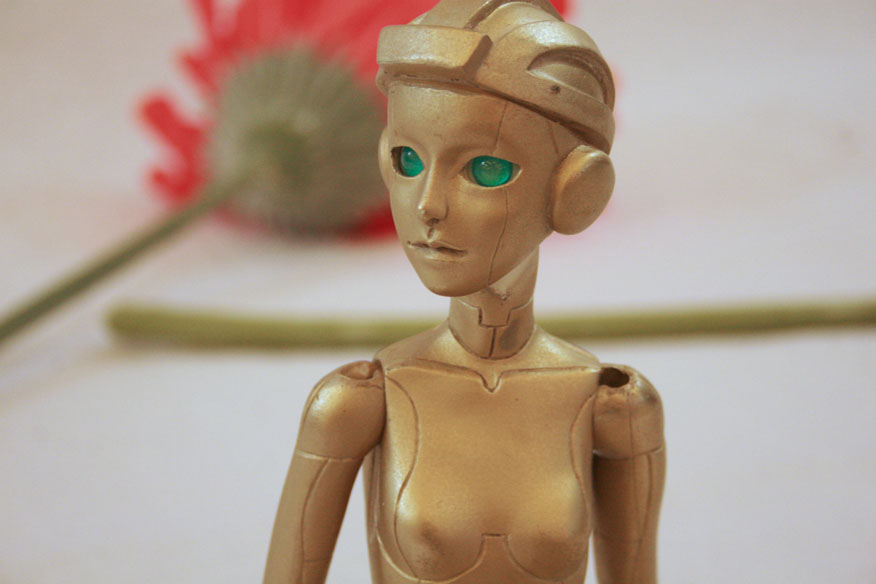 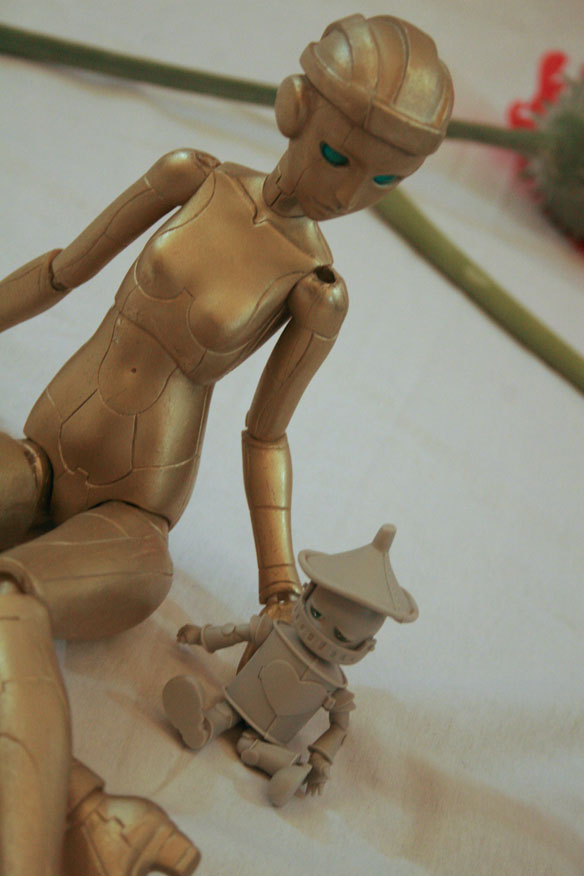 Here’s one of the most innovative BJDs in recent memory, her SoulDoll Souloid Kowalski, a six-armed cyrborg mecha dragon therianthrope. With every one of his thirty fingers fully jointed, he probably wins the prize for most articulated BJD ever. His soft, dreamy human parts and robotic pistons have been sculpted with equal love. Being rather top-heavy, he uses his tail [partially seen in first photo] to help him remain upright. 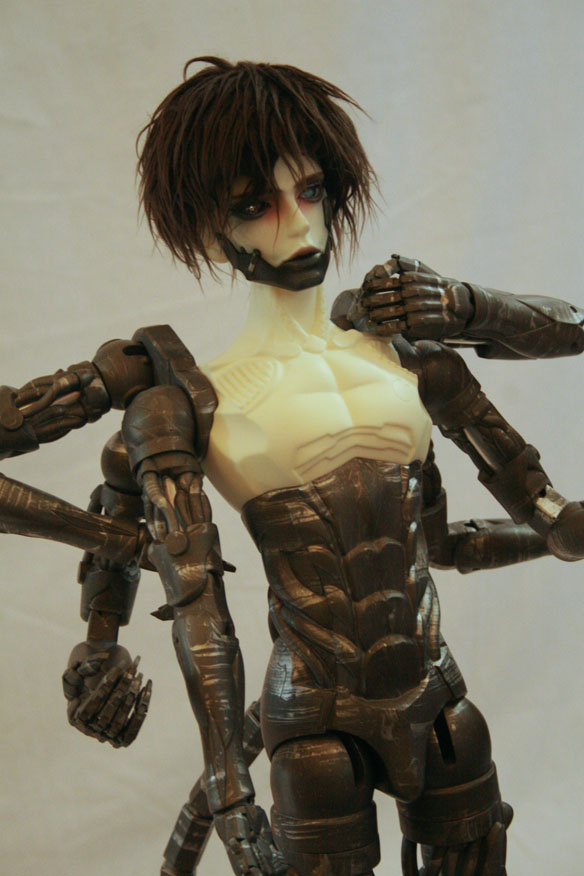 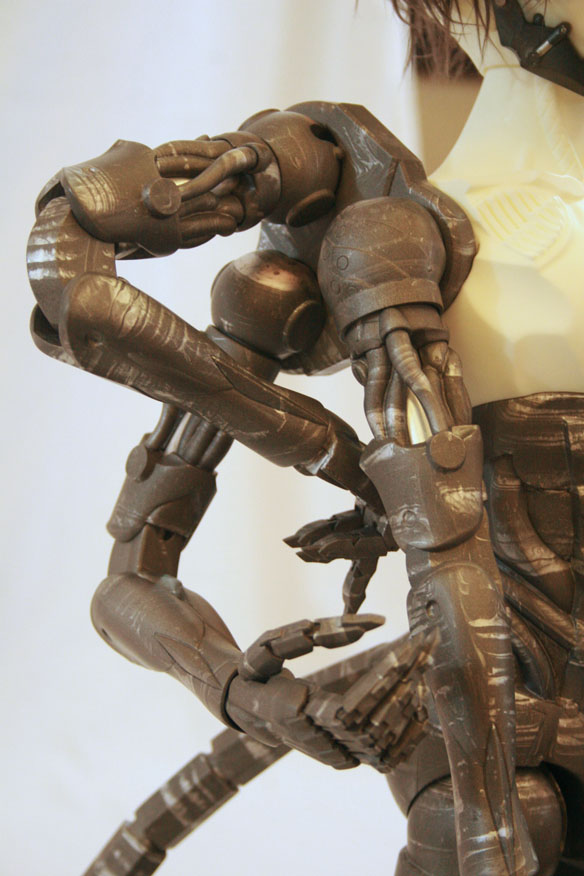 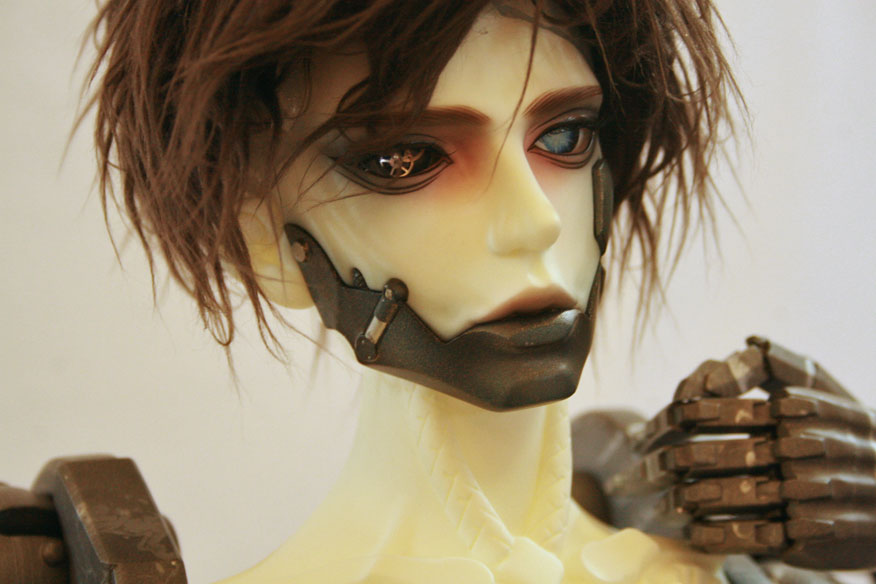 Kitty Fields also came with her Iplehouse Bianca cyborg. Like all Iplehouse dolls, she’s beautifully and voluptuously sculpted with well-rounded musculature, and her cyborg parts flow harmoniously into her human parts. Too bad she looks like she’s wearing a metal bikini. Souldoll’s fusion of cyborg and human parts succeeds much more at giving the impression of kinky corsetry. I really wish Souldoll would do a 1:3 scale female Souloid in the same vein as Kowalski and his friend Billian. 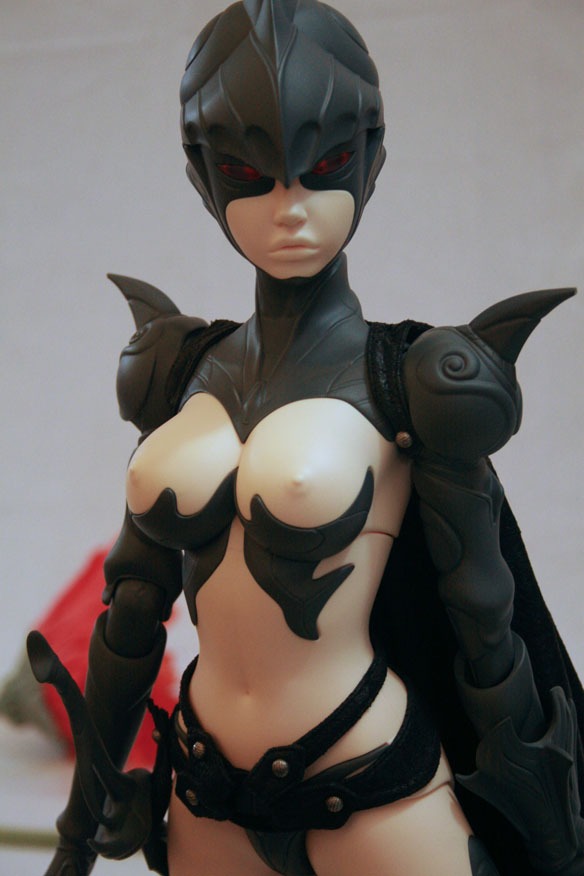 Well, her scanty cyborg bits do show off her significant ass. 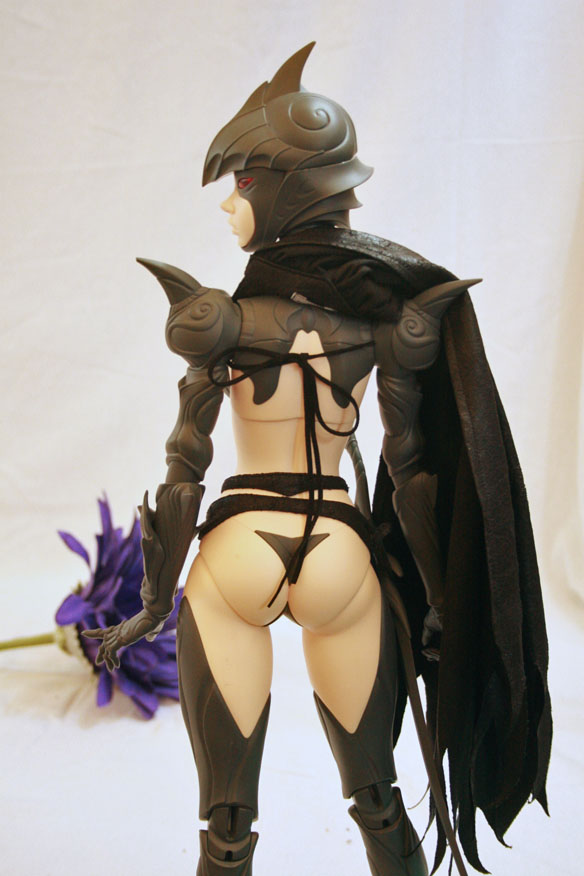 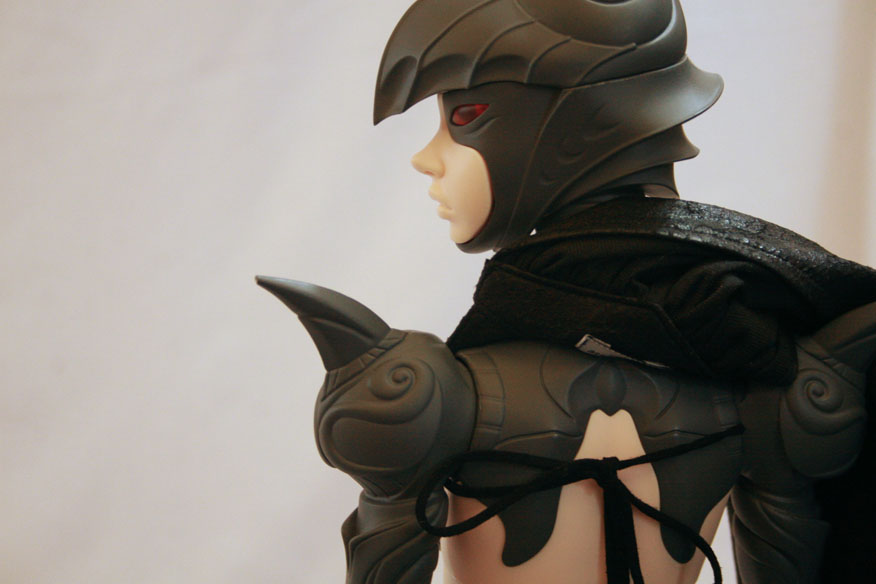 This entry was originally posted at http://modernwizard.dreamwidth.org/1683749.html. You can comment here, but I’d prefer it if you’d comment on my DW using OpenID.