If I’m going to get an IOS Infernale head, which I am, then I need to stop calling her Tonsil Hockey Deux and start calling her by an actual name. So it’s official: Tonsil Hockey Deux will hereafter be known as Thalia Hesperus Donaldson. No particular reason why — it just sounded good. Thalia’s name’s origin as that of the Greek muse of comedy is irrelevant.

Thalia needs some significant modification. First and foremost, that nose needs some serious reduction. It, of course, solidifies the sculpt’s beautiful adherence to the conventional stylization of male anime characters, but it’s way too much nose for my tastes. Here’s my proposed deletion: 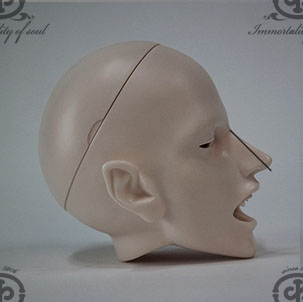 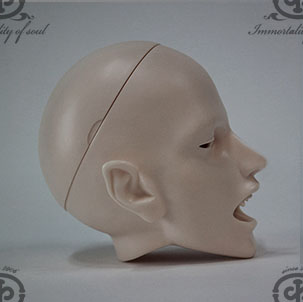 Something also needs to be done about those narrow squinty eyes. Again they broadcast the sculpt’s awesome commitment to the anime aesthetic, but, while I like the general pointness of the aesthetic, I dislike the very small eyes. Thus I’m either going to close both eyes, as I like sleeping dolls [like Polly], open both eyes more or close one eye and open one eye more for a winking expression [like Jujube has]. I really like the winking expression, so maybe I’ll go with that.

I was thinking about sanding down the brow ridges, but I’m really not that hung up on whether secondary sex characteristics skew a face toward the more stereotypically "feminine" or "masculine" interpretation.

Thalia represents a mishmash of ideas. She’s one of those open-mouthed vampire head sculpts with expressive teeth and tongue that I love so much, but she’s not really a vampire. In fact, I’ve long wanted to make a doll with double ponytails made of neon snakes, so I’m porting that concept over to Thalia and making her a Medusa-like therianthrope. She’s also a submissive kinkster, a development based solely on my desire to jam a ball gag in her open mouth. Also there’s a lot of leather and fetish gear out there in 1:3 scale that I would enjoy makng use of.

This entry was originally posted at http://modernwizard.dreamwidth.org/1683436.html. You can comment here, but I’d prefer it if you’d comment on my DW using OpenID.