Saturday, our only full day at the convention, I hit the registration booth shortly after 9:30 AM [and the opening of the dealer room for the day]. Who should I meet there but fellow Vermont Doll Lovers member Lyrajean [not pictured], who handed me my badge and swag bag? 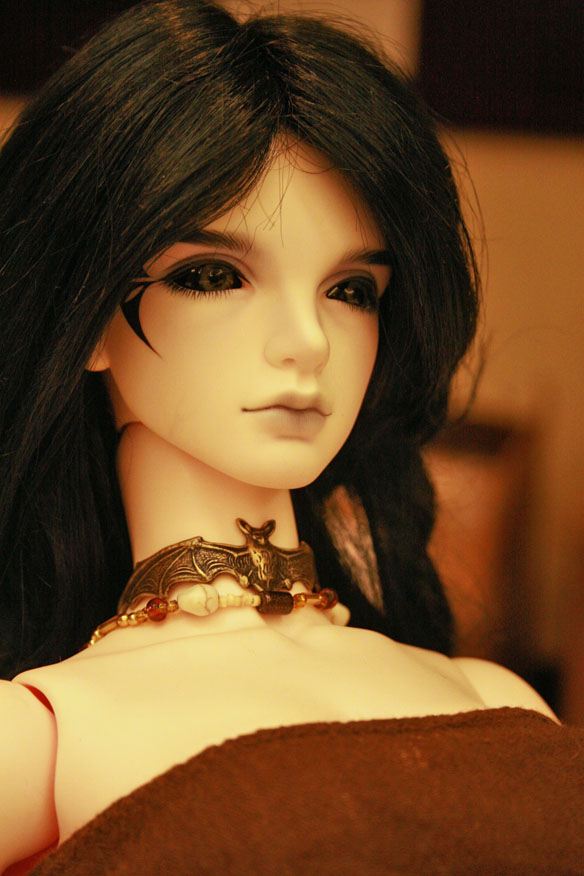 Rafael Nuri, maker of her own porcelain BJDs, was also at registration with her Dollmore Trinity Lumie, on which she had done the faceup. Every time I see one of the 105cm Dollmore Trinities, I am struck by three thoughts. 1) Wow, they’re big. 2) I want one! 3) Too bad I can’t buy from Dollmore on the primary market due to moral objections. 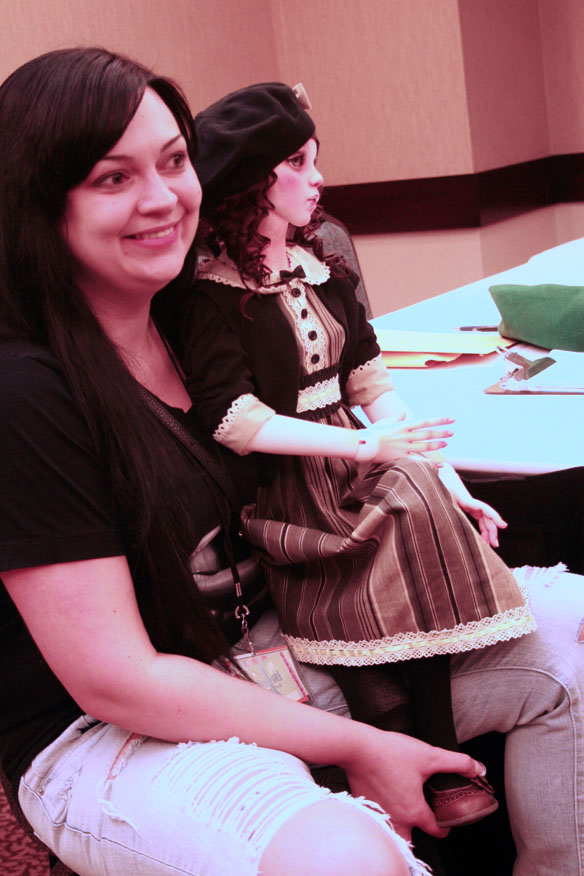 Of all the dealers I saw, I most enjoyed saying hello to Batchix, one of my longtime doll friends, who most recently 3D printed a 1:6 scale walker for me. Since she last printed Peter’s walker, she has acquired a new Makerbot [3D printer] that produces much smoother results, such as the ~1:6 scale Clever below. 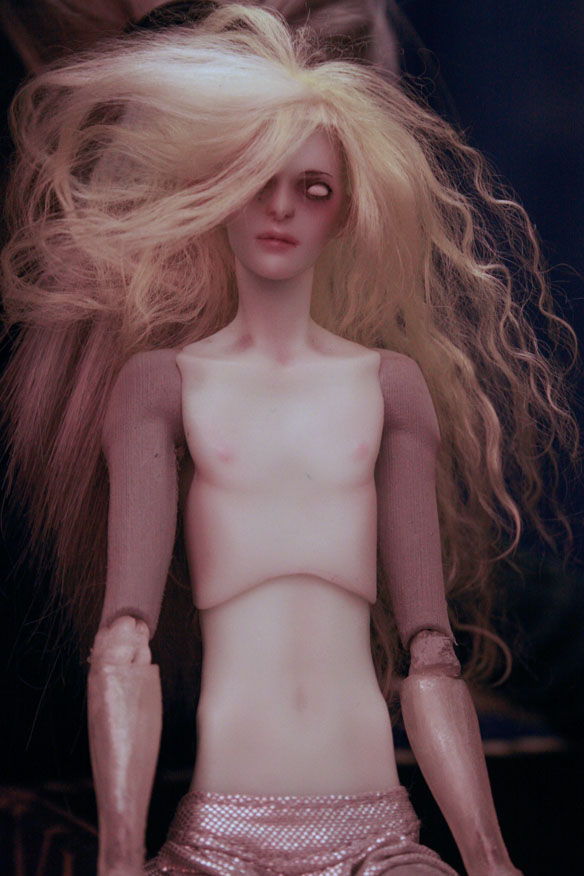 Batchix was also displaying some of her recent 1:4 scale BJDs, including [from top] Dark Elf, Orpheus and St. George. I have been following her work since the beginning, and I must say that she has greatly improved and really come into her own as a sculptor and a stylist. Also she’s just as adorably enthusiastic in person as she is online. 😀 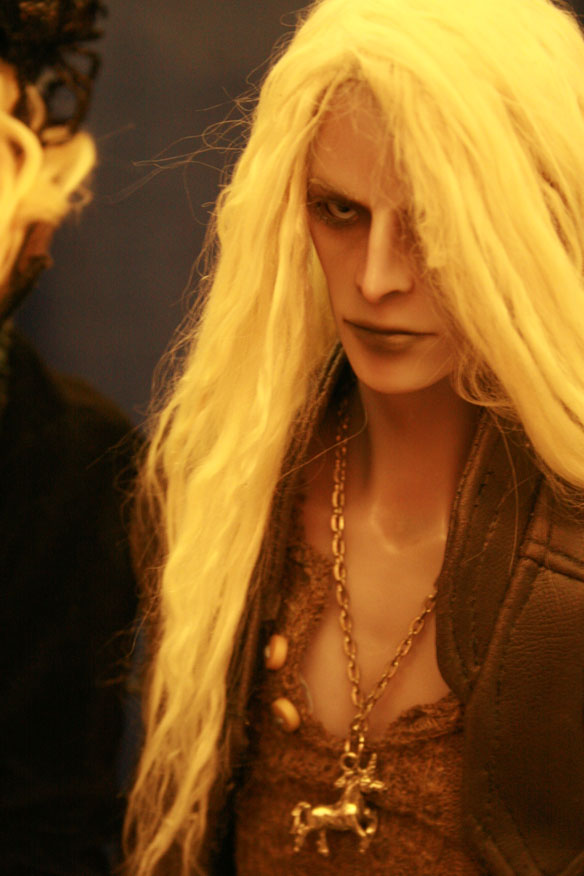 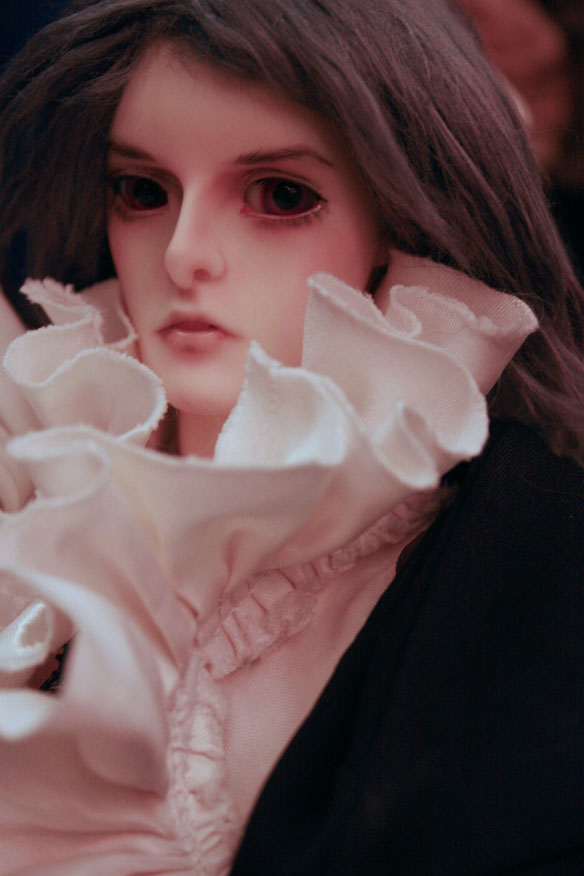 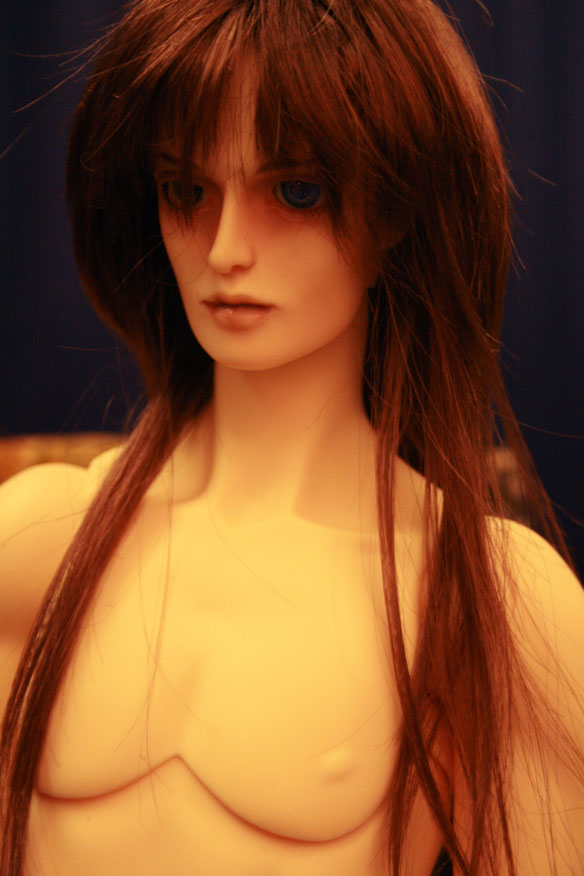 Nalisinko Workshop’s models showed up at the dealer room in outfits different than those they had worn during Friday’s room sales. The fluorescent light jaundiced all my photos of their new duds, so I’m reproducing these pictures from Nalisinko’s official Web site.

This fabulous creation, modeled by Iplehouse EID Carina, is called Black Witch. The feather collar makes this topless number extra classy and dramatic. My Jareth would love it! 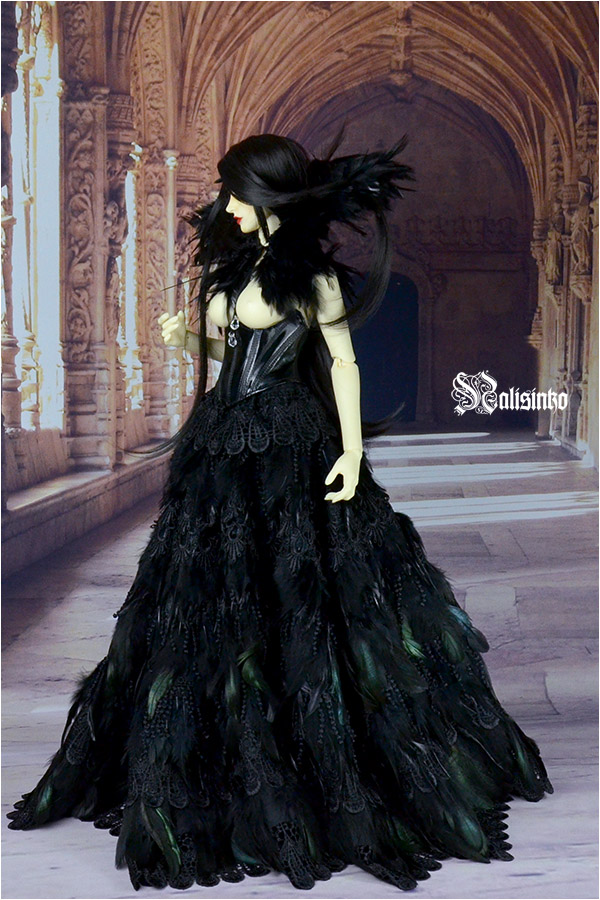 And this is Bloom Show, worn by Soom MD Super Gem Vesuvia. While technically accomplished and innovative, especially in its use of the transparent bodice and tulle overskirts, it suffers from an indiscriminate distribution of oversize and unorganized flowers. 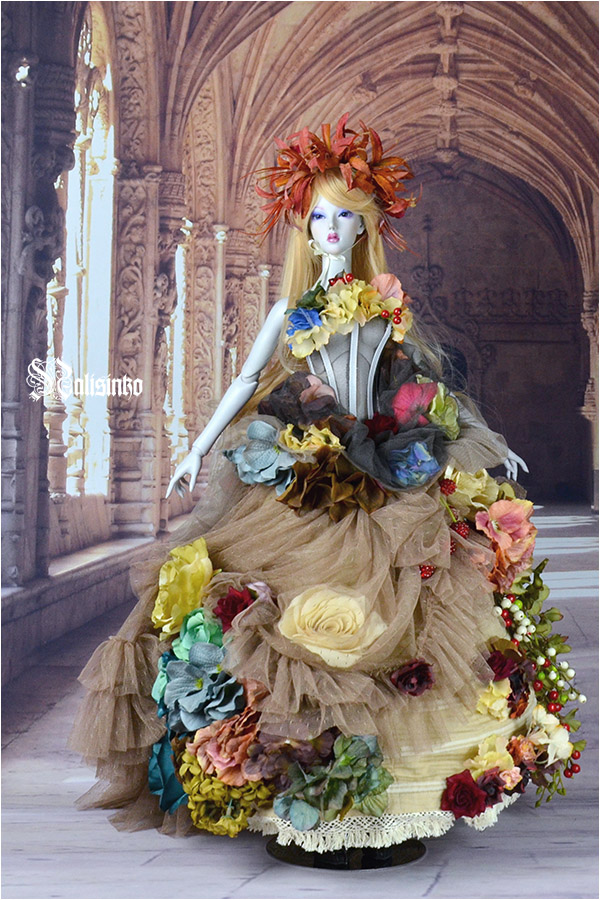 Soom showed up in the dealer room with a small display, mostly of Idealian Romantic Hyperons, in grey skin at top and WS at bottom. Grey skin was a Dollism exclusive. 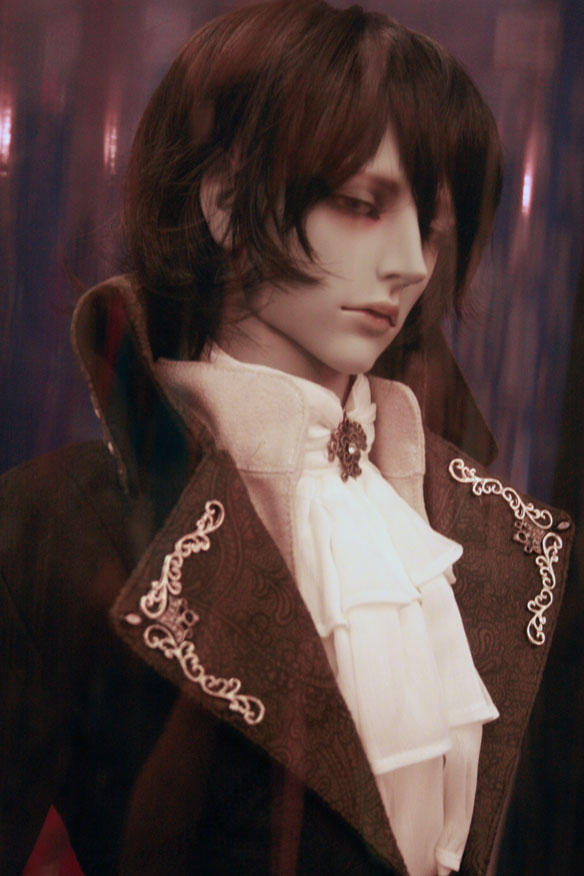 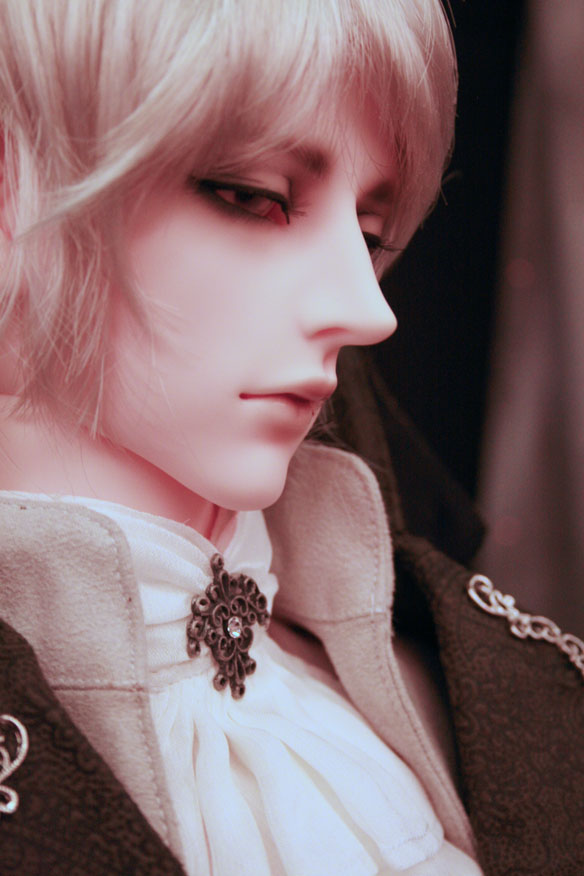 Soom Serin and Rico, the Monthly Dolls from August, also attended. Part of Soom’s line inspired by fairy tales, they represent the company’s interpretation of the Little Mermaid. I like the outfits, as well as the translucent orange or sea blue resin, but I’m unimpressed by the mermaid tails. After experiencing the engineering marvel of my Asleep Eidolon mermaid tail with its snake-like ability to bend and curve, I find Soom’s sculpting, which basically just joints the tail at "hips," "knees" and "ankles," unimaginative and lazy. 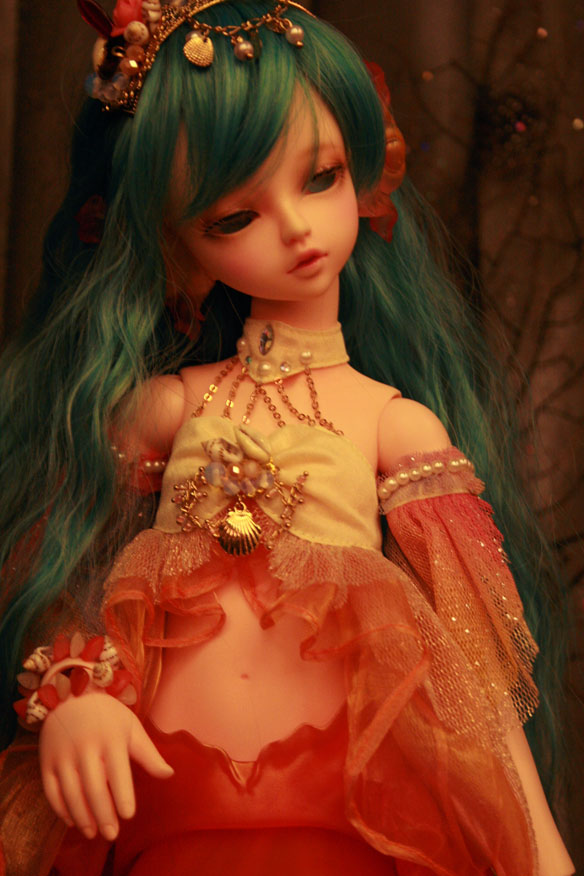 The Dollism organizers provided photo sets in different scales where people could place their dolls and take shots. Below, beamlette’s Elfdoll tinies [from left: Jin dal Rae in yellow, Bong Sun Hwa in white, Min dal Rae in red] take over the Mad Loft room. After seeing three pairs of bunny slippers, I think that my own Elfdoll tiny, Jujube, would benefit from a pair herself. 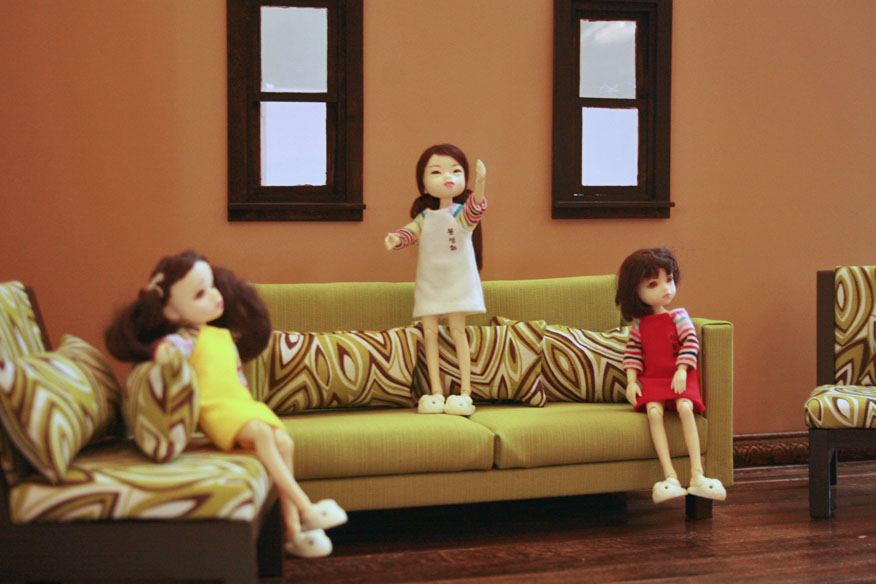 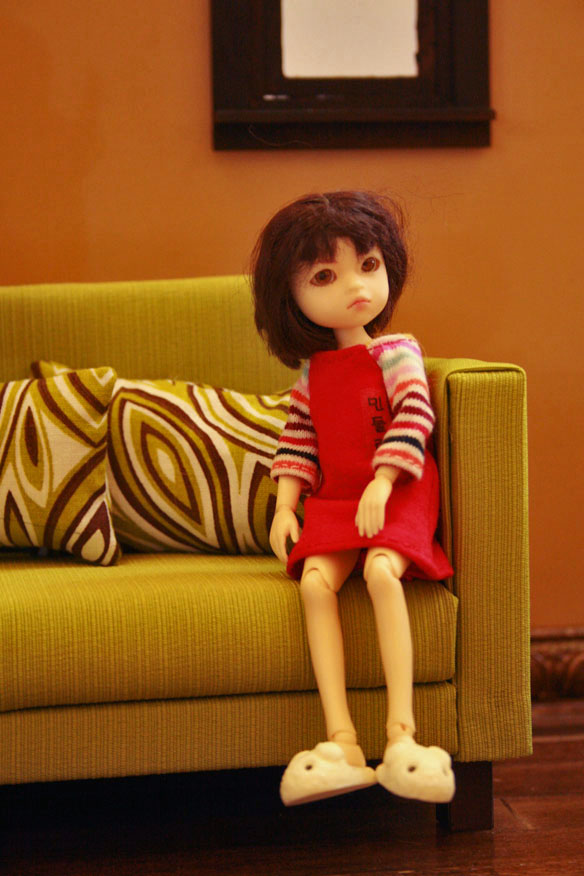 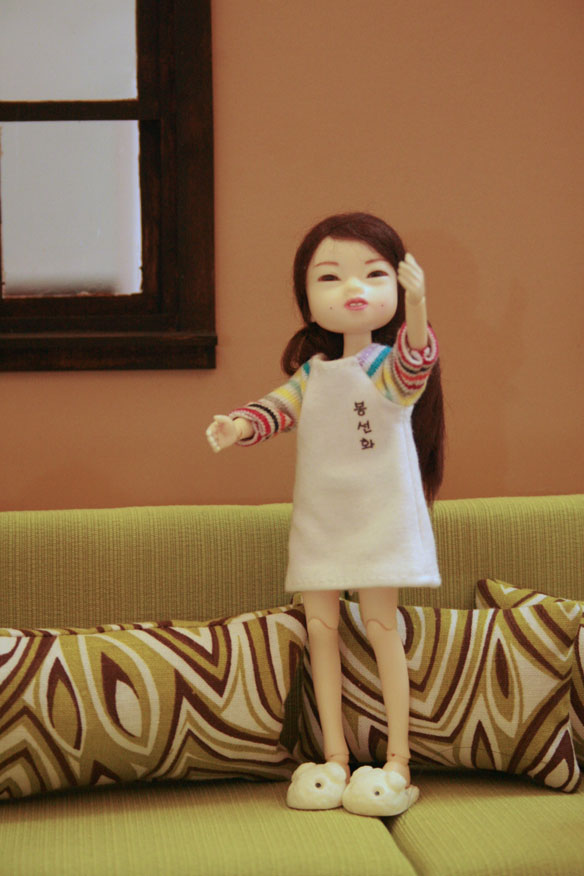 Beamlette’s trio occupies the 1:12 scale Crafty Kitchen set. I entertained the thought of purchasing this set, as it, like all available dioramas, was for sale, but my lack of cash stopped me, as did my lack of more than one 1:12 scale doll. Clearly I need more Elfdoll tinies. :p 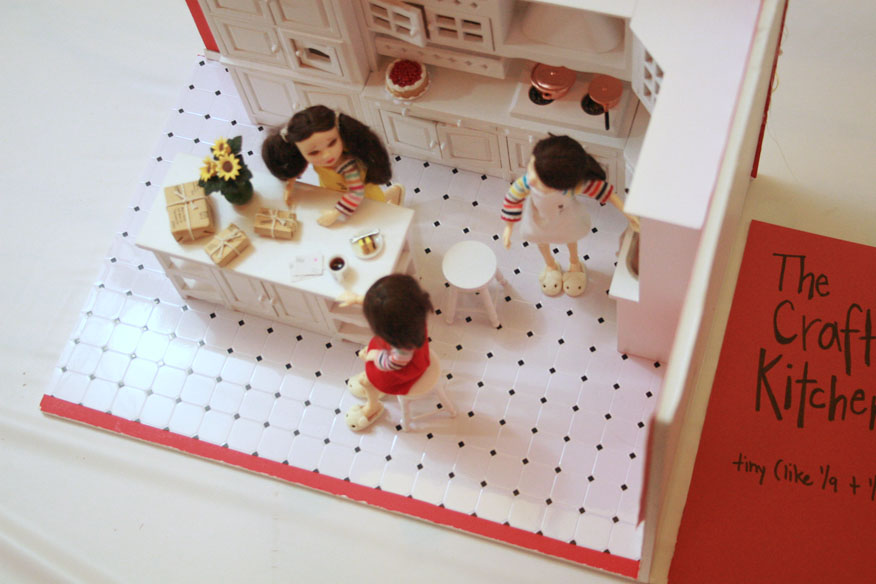 Araminthe made herself at home in a 1:3 scale set, the Pink Room. 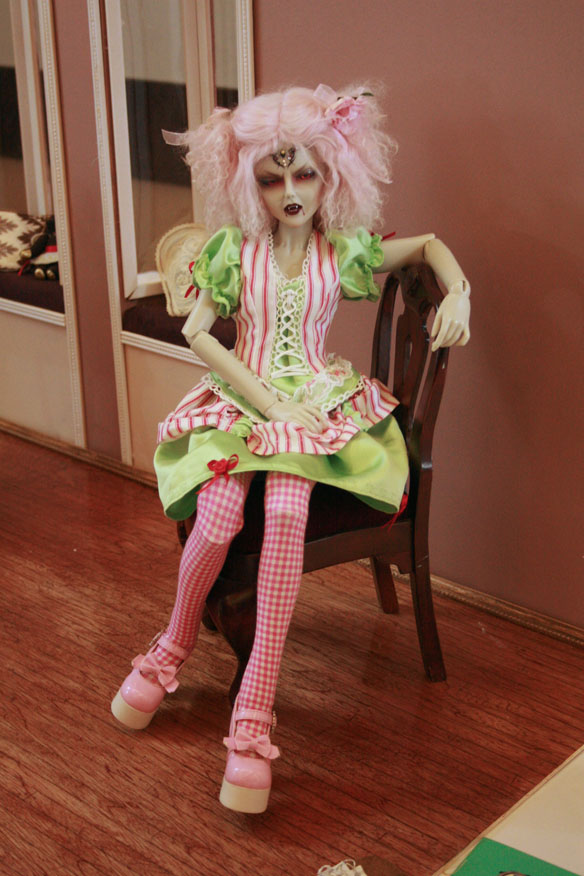 There were windows with actual panes in this set, at which Araminthe practiced her lurking skills. 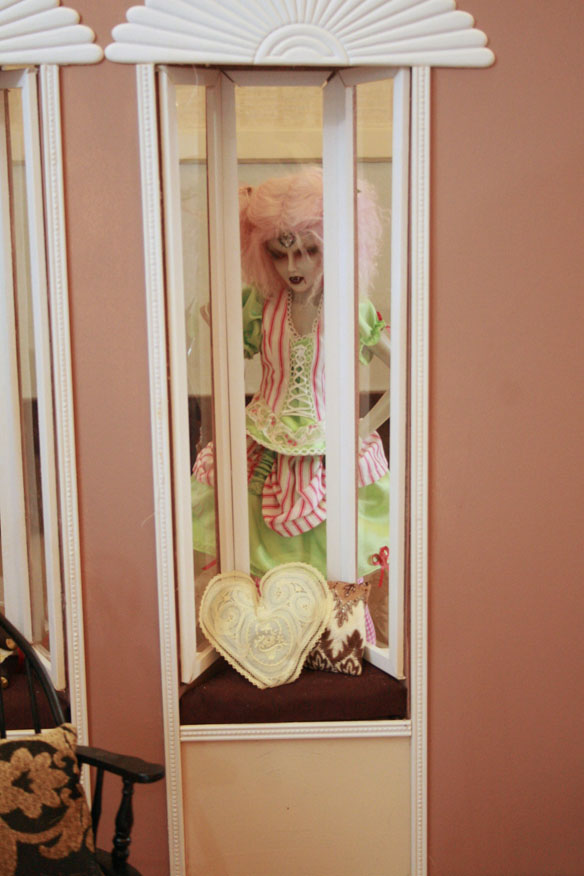 After that, she demonstrated her dramatic flopping abilities in the Master Bedroom set. 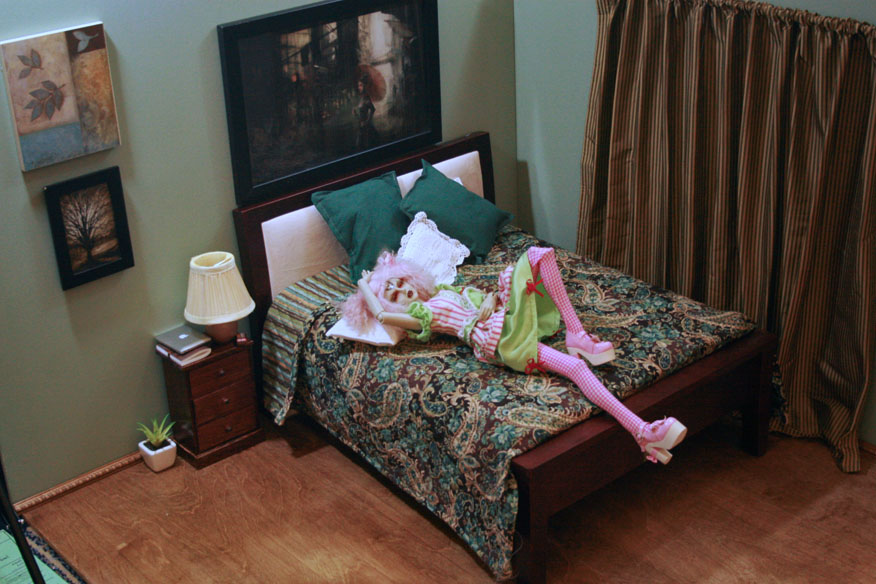 Armeleia, main DOA mod, con organizer and sculptor of Seed Dolls, has upcoming preorders for two new 1:9 scale tinies. Below, that’s Starling in dark brown and Moonling in mint green. I previously owned her first Seed Doll, Inkling, who was Araminthe’s doll Petula for a while, but I eventually sold her. I am now tempted again, however, by these delicate and expressive sculpts [even if they don’t have faceplates like Inkling did]. 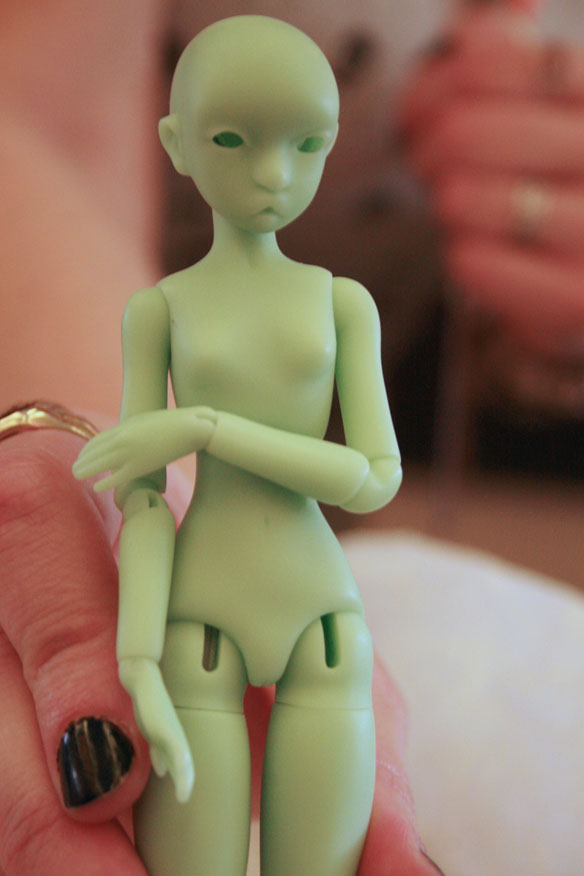 This entry was originally posted at http://modernwizard.dreamwidth.org/1683083.html. You can comment here, but I’d prefer it if you’d comment on my DW using OpenID.