Last night I sprang for the long-limbed, big-eyed Star 2 for G3F by LadyLittleFox, Cake One, and Traveler. All the renders on the Daz boards made her look irresistibly adorable, especially when blended with other G3F characters. I wanted to see how my digital people would look if Starified.

So here’s an initial attempt at a bishoujo style Jareth. The maid outfit and neko ears fulfill genre requirements, or so I’m told by the authorities in these matters. The jpg is named amazing because that’s what I exclaimed when I applied his expression. The angle of the current [CROTCH!!!!!!!] shot doesn’t show much detail, but he definitely has evil intent — of the adorable variety. :p

I remain undecided about the results. As much as I love the endlessly long and narrow limbs, the reduction in size of the lower half of the face [especially lower jaw and mouth] is really throwing me for a loop. It makes him look like a kid in a bad way, and I keep wanting to compensate by bulking up the jaw, lengthening the chin, and sharpening the whole bottom of the face. That said, I love the way that the addition of some of the Star morph makes facial expressions more charmingly exaggerated.

When I work on this some more, I really need to swap out the texture shown in this picture for something more plasticky and idealized. 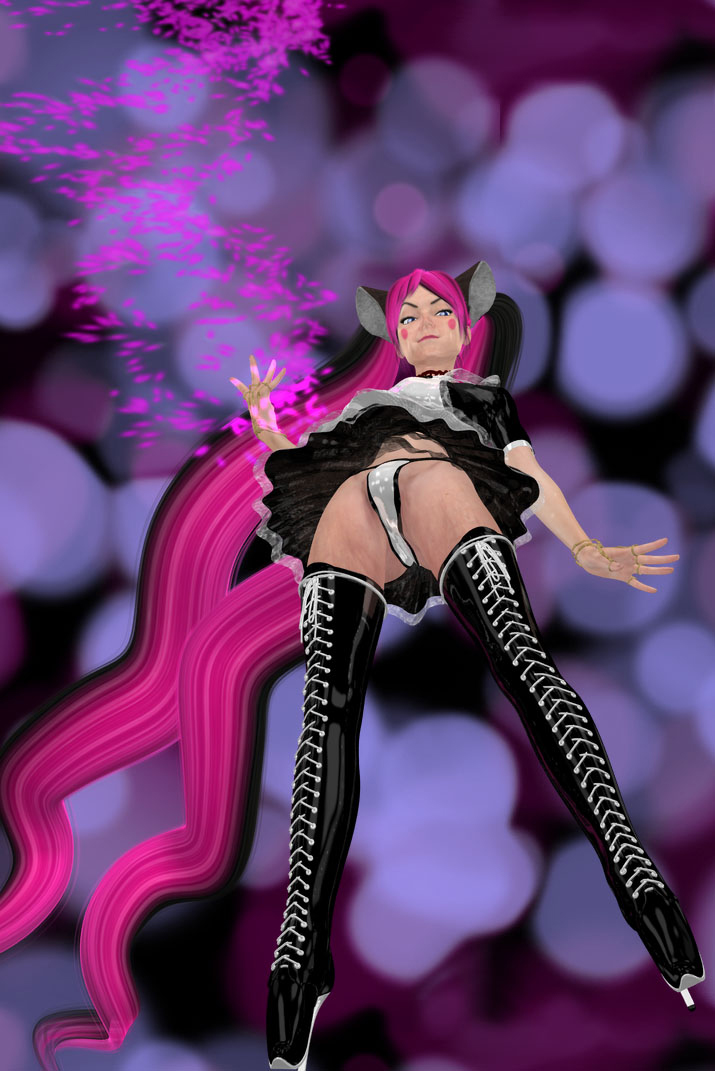 Credits: Jareth is a Genesis 3 Female base figure. Morphs include all those previously credited, plus some of the aforesaid Star 7 and [I think] some of Girl 7 [body]. Saiyaness’ G3F Opal texture, lightened and slightly dewrinkled. Neikdian’s G3F Artistic Makeup Concepts. outoftouch’s G3F Swirly Pigtails. Ears from AprilYSH’s V4 Tandy Hair.  Blouse, skirt, apron, and undies from WillDupre’s A3 Maid. SynfulMindz’ G3F Meliora Ballet Boots. Biscuits’ V4 Slit Throat. fabiana’s V4 Bonellusion. Shaders include DestinysGarden’s Toon Style Hair, a tiling bone texture by porsimo, and, of course, no render of mine would be complete without vyktohria’s Simply Latex. Pose from Val3DArt’s G3F Magical Girl Poses for Aiko 7. Expression by meeeeeee. V3Digitimes’ Soldiers of Magic Serpio for the sparkles. Mind-blowingly awesome background also by me.