Jareth’s appearance has changed over time, the permutations most easily tracked by the differences in my renders of him.

Here are the earliest likenesses of him that I have from May 26, 2009. Then from September 12, 2012, a BJD headsculpt based on my digital sculpting of the aforementioned M3 model: Credits: Jareth is a Daz Michael 3 base with a combination of M3 head/body morphs and Capsces’ Brom head/body morphs [and a morph for the pants bulge that I did myself]. Skin texture base and most of the make-up is from kaiZ’s V3 Beauty Kit, with eyeliner elements from etomchek and PureEnergy’s Stardust. Second skin outfit is generated from zew3D’s Clother for V3, specifically Naughty Pack 2 [harnesses], Casual Pack 4 [jeans] and Casuals Pack 3 [camisole]. Boots are from Uzilite’s Sade. Hair is Daz/AprilYSH’s Amarseda. Glasses are Slosh’s SPEX for Genesis. Collar is a freebie from 3-d-c. Background is a freebie by propschick. Poses is one of Victoria 4’s defaults, tweaked slightly by me. Credits: Jareth’s head is a Daz Michael 3 base with a combination of M3 head/body morphs and Capsces’ Brom head/body morphs. Skin texture base and most of the make-up is from kaiZ’s V3 Beauty Kit, with eyeliner elements from etomchek and PureEnergy’s Stardust. Hair is Mylochka’s freebie Palamas.

His body is the Daz Genesis base. Body shape is a combination of basic Genesis morphs, including Standard Male, Thin and WaistWidth, as well as DieTrying’s BackUndefine and BladeboneDefine morphs from his 182 morphs for V4 [converted by SickleYield for Genesis]. Jabba’s Junk in the Trunk morph rounds things out [har har]. Genesis base and all morphs mentioned are free downloads!

Jareth is wearing Slosh’s SPEX for Genesis, as well as Wilmap’s Pinstripe Suit for Genesis [shirt, tie, jacket and pants] and her Genesis Buckle Heeled Boots. Spex aren’t free, but the clothes and boots are. Not visible under his clothes are the ball joints and the corresponding limb morphs from SickleYield and Fuseling’s Ball Joint Doll for Genesis package.

Pose is from Schlabber and cascarda’s eXpression for V3 pose pack, and the background is a png I made myself. Standard credits on models, morphs and textures for digital me and digital Jareth apply. From top to bottom, I’m wearing Daz/SWAM/goldtassel’s Babs Tales with bangs provided by Kozaburo’s freebie Alice Hair, both with custom trans maps by me, the collar from MAB/WillDupree’s Catgirl for V4/A4 and corset, sleeves, cuffs, pants, overskirt, stockings and shoes from the wonderful Daz/Mada collaboration Just Jokin’ for V4/Genesis, which is my latest favorite outfit. [Comes with poseable jester cap, matching jester puppet and stage backdrop, not shown — best $12.48 I’ve ever spent {I got it when it was 50% off!}.] Jareth is wearing SWAM/goldtassel’s ElfDance Anime Hair and arm jewelry, waist jewelry, sash, crotch jewelry [har!], drapey leg things and slippers from Adzan’s Solar Solace for Hiro 3. Poses are from Schlabber and cascarda’s eXpression for V3, tweaked by me. Incredibly sophisticated backdrop by me.
From April 28, 2014, when he moved up to a Genesis 2 Female base figure: Credits: Jareth is a freebie Daz Genesis 2 Female figure with a bunch of morphs ported over from Genesis via Dimension3D’s GenerationX2. I originally designed this character’s morph on the Daz Michael 3 base with help from Daz Michael 3 head and body morphs and many refinements from Capsces Digital Ink’s Brom custom morph package for M3. Further adjustments and body part scaling occurred when I ported Jareth over to the Genesis 1 base. Crucial to the success of this render is RAMWolff’s Male-Bulge morph. :p

Texture is rebelmommy and shellyw’s RBSD V4 Merchantbase, made possible by Victoria 4 [morph and UV set] for Genesis 2 Female by MallenLane. Makeup contains elements from Art Collaborations’ Art Makeover Merchant Resource for Victoria 4 and Genesis. I did the eyebrows myself with help from 28 [free] Eyebrow Photoshop Brushes by photoshopweb.

Hair is made of two instances of Cherry Hair for Genesis and G2F by Valea, with custom scaling and trans maps by me. There’s also an instance of Kozaburo’s free Messy Hair for V1, with Morphs++ as added by Travis Casey and a custom trans map by me.

Outfit is, from top to bottom, as follows: Uzilite’s freebie Marquis cape for M4, freebie Flat Necklace 01 for Genesis by wilmap, pendant scanned by me, Blouse 01 for Genesis by SickleYield, vest from Adzan’s freebie Still Morning for H3, morphed a bit with D-formers by me, shirt cuffs from Neftis’ Lestat de Lioncourt Suit for Genesis 2 Male, pants texture applied as a second skin from SickleYield’s freebie Free Leggings for Genesis, wilmap’s freebie Buckle Heel Boots for Genesis [not shown]. Shaders used include GeorgeHaze’s freebie metal shaders and leather/Spandex shaders, as well as SickleYield and Fuseling’s latex and rubber shaders.

Pose derives mainly from one of Khory’s Easy Going Poses for Michael 5, with some help from katastrophe’s Body Talk Arms. I did the expression myself.

Crystal ball is FirstBastion’s gazing ball from the Useful Mirrors set, scaled down. Set is Art Collaborations’ Enchanted Glade. Lights are one of two sets that came with Useful Mirrors, tweaked by me. 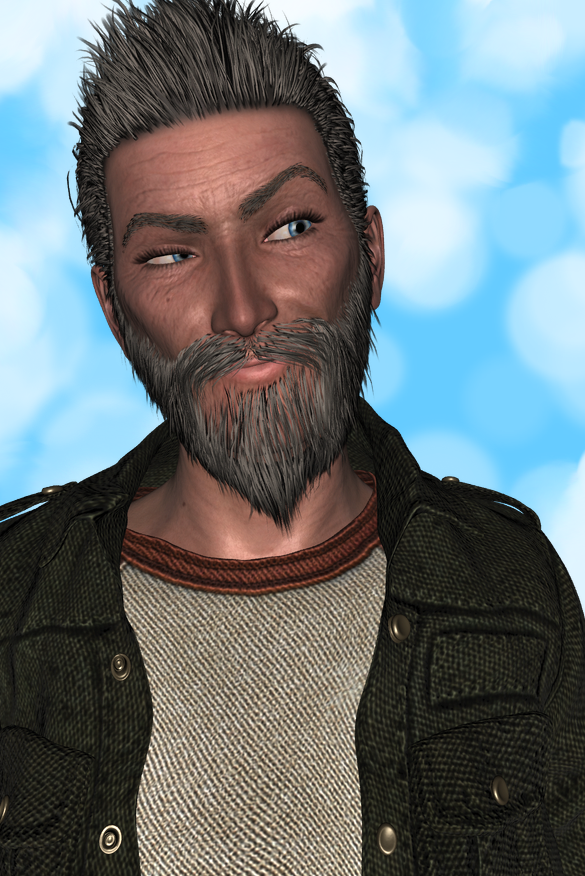 Credits: Base figure is Genesis 2 Female. Lots of morphs are involved here, primarily my Red Planet Arachnid head morph, ported from Genesis with Dimension 3D’s GenX2 or whatever it’s called in this version. There is a small amount of my Jareth BJD head morph, which I made on the Michael 3 base with lots of help from Capsces’ Brom morphs. Hair, brows, beard, entire outfit, and texture [except for eyes, which are from RebelMommy and shellyw’s RMSD V4 MerchantBase] are all from Luthbel’s super-awesome character and outfit for G2M, Horror Survivors Marius. Pose from Sedor’s BWC Fashion Poses, tweaked by me. Custom expression is a blend of my infamous smirks [SmirkGleeful +SmirkDevious, I think]. Background from my Bokehground Expansion shaders.

From January 19th, 2016, when he was moving over to the Genesis 3 Female base figure: 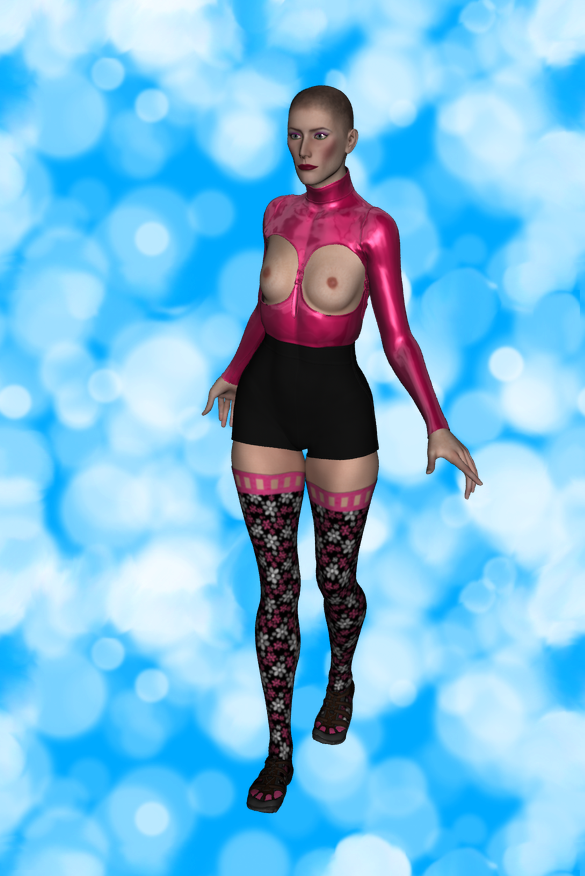 From January 24th, 2016, with slight body and texture adjustments: 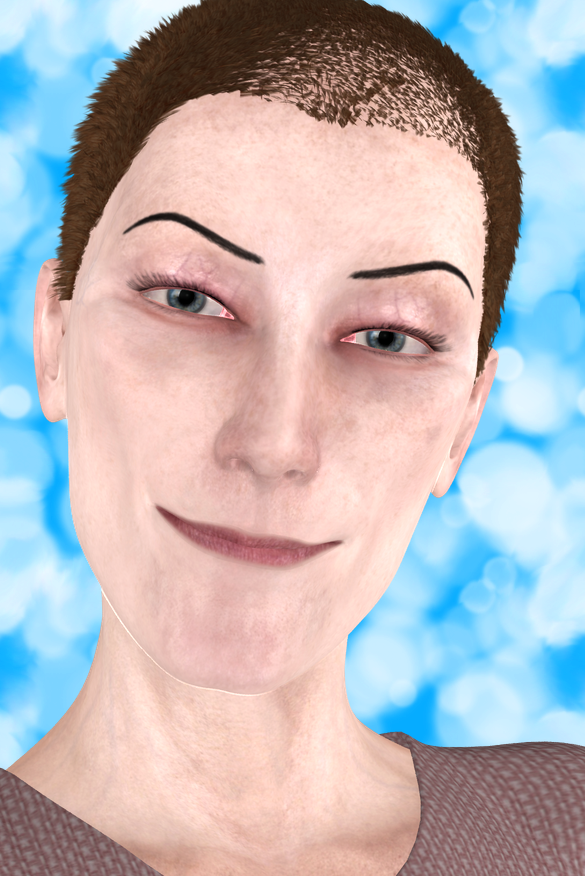 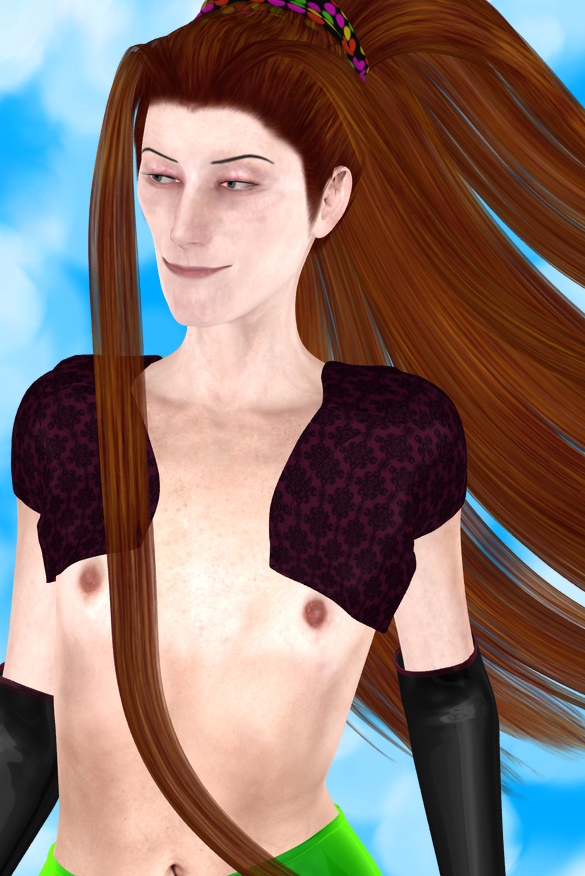 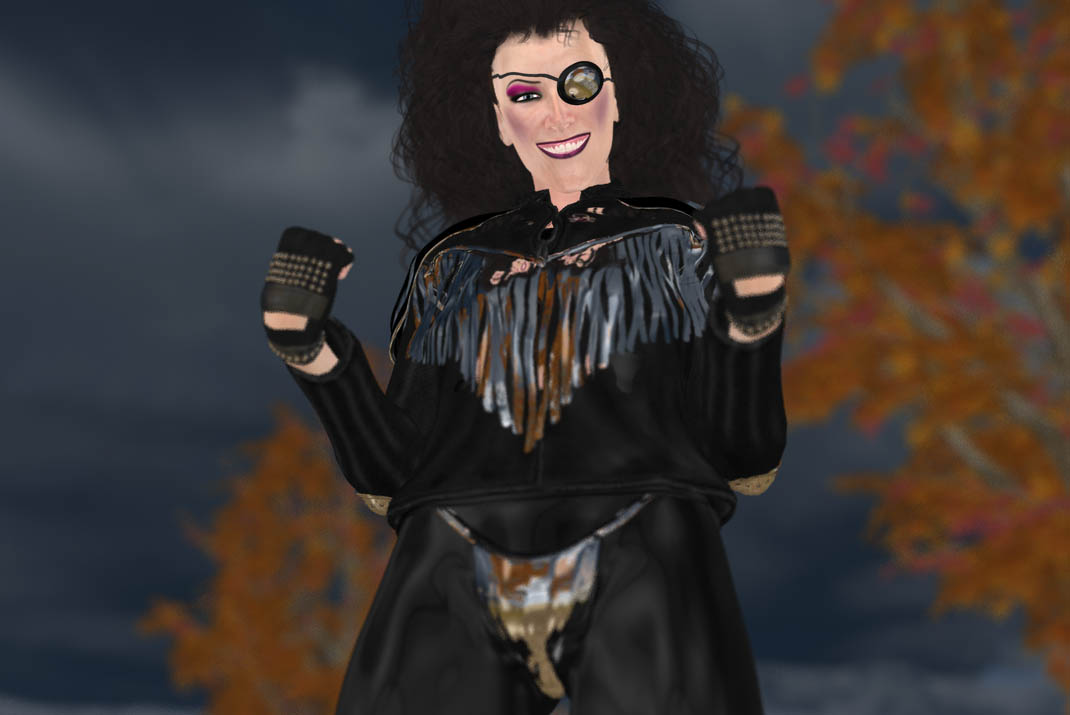 Jareth started out cartoonish in shape. Everything about him was exaggerated, from the sharpness of his cheekbones, to the largeness of his eyes, to the length and narrowness of his frame.
Early versions also emphasized his smirk and his mobile eyebrows, both of which were sculpted into the digital version on which my BJD was based.

Moving him from the M3 to the Gen1 base gave me a chance to change his body shape, narrowing the waist and adding more curve to the hips.

The G2F base occasioned mostly a change of texture, all the better for bold, meretricious makeup.
He became notably more realistic in September, 2015. This was when I stopped using the cartoony caricature on which I had based my Jareth BJD for the main source of the likeness. I switched instead to my Red Planet Arachnid morph, my attempt at approximating the likeness of David Bowie around 1975. My Jareth BJD head morph contributed only a small amount to this version. I also added aging morphs. This was about the time too that I returned his limbs, neck, and torso to less exaggerated proportions.

Moving him to a G3F base occasioned further realism and refinements to his facial features, as well as a wider curve to his hips. He also got a new texture that made him look his age.

In the most recent round of changes, shown at left in the last render, I basically reduced his
similarity to David Bowie and increased his similarity to me. In practice, that means I dialed down the strength of the Red Planet Arachnid and G2F legacy head morphs and cranked in about 30-40% of the “me” head morph. The results increase the size of his head, broaden the front of his face, square his jaw, widen the point of his chin, and make his mouth wider. They also rid his features of some of that neotenic delicacy that I have always disliked about his digital form. I love the way that I can see the curve of my mouth in his. 😀

Funny how, no matter what the changes, he only ends up looking more like himself.