Today I increased arm articulation on two of my 1:6ers. One of them, Marabou, is a 12″ Playmates Uhura figure. She is a scaled up version of a 3 3/4″ mini action figure by the same company, with all the odd proportions, solid limbs, and simple joints that this entails. Her solid, chunky construction works to my benefit, however, since she has no delicate fiddly little parts to break during my modifications.

Anyway, Marabou has gone through a few mods since I acquired her. I removed her original hands, which had only wrist swivel articulation, and swapped them for hands with hinge/swivel ball joints. Last year, I added upper arm and upper thigh swivels and also took a good chunk of height from her thighs. For the modicum of articulation she had at that point, she actually assumed some realistic postures.

Today I made Marabou’s poseability even better. I secured the friction-fit swivel pins in her thighs with Aves Apoxie Sculpt so that her legs wouldn’t keep dropping off.

I also addressed her abysmal elbow flexion. She didn’t even have 90 degrees of bend! So I disassembled her hinge elbows, the dense, somewhat soft plastic being much easier to work with than the hollow molded plastic bits of high-end figs. I then carved out the top inner forearms and put the arms back together. The first picture below shows, at left, the default elbow flexion. At right are the three pieces of the arm joints. The second picture below shows Marabou’s improved arms, now with over 90 degrees of bend at the elbows. She looks even better dressed. :p 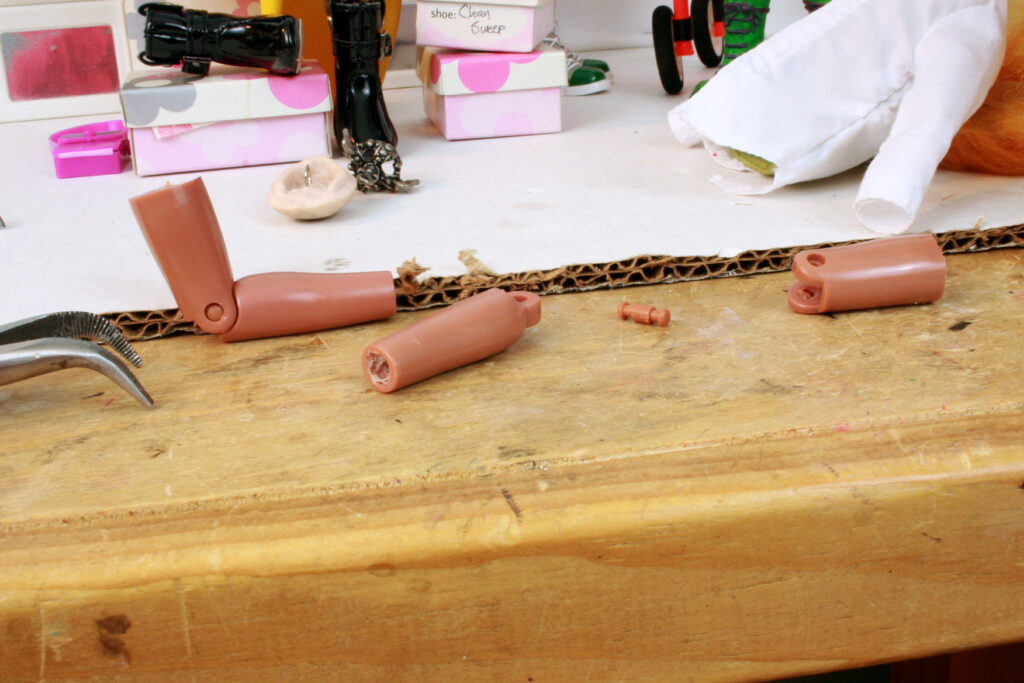 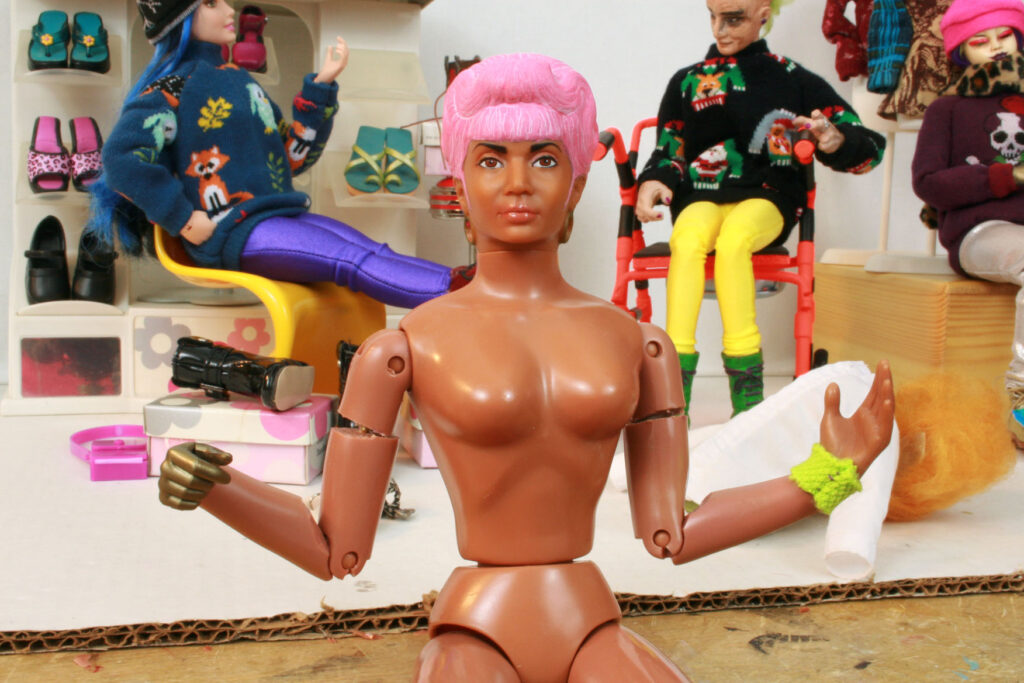 I also worked on one of my Mattel Curvy Fashionistas, for whom I’ve long had the goal of adding basic limb articulation. Here she is on the right, standing, blissfully unaware, next to a GI Joe that I got from Goodwill for $2.00. He needs leg shortening, shoulder narrowing, and something done with that weirdly barrel-shaped torso, but not at the moment. Anyway, this reference picture shows how they look pre-modification. 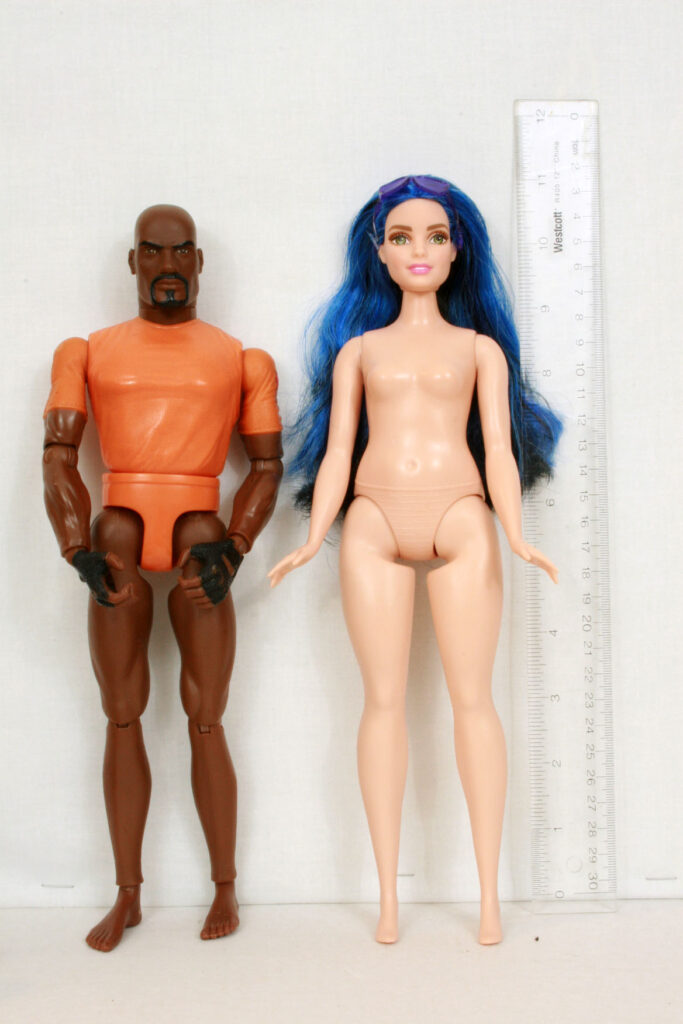 I thought about adding elbow joints by using extra ball-jointed wrist pegs, but then I found some Obitsu 27cm lower arms with Obitsu slender male hands in my raw dolls bin. Since the skin tone was an approximate match, I hacked off Curvy’s arms above the elbow and drilled out her upper arms to make sockets for the pegs of the Obitsu lower arms. I put some Aves Apoxie Sculpt in the sockets so that the Obitsu arm pegs fit by friction alone. Also hacked off 1.5cm from lower legs and wedged stumps in Shoezies boots. Here’s the result. 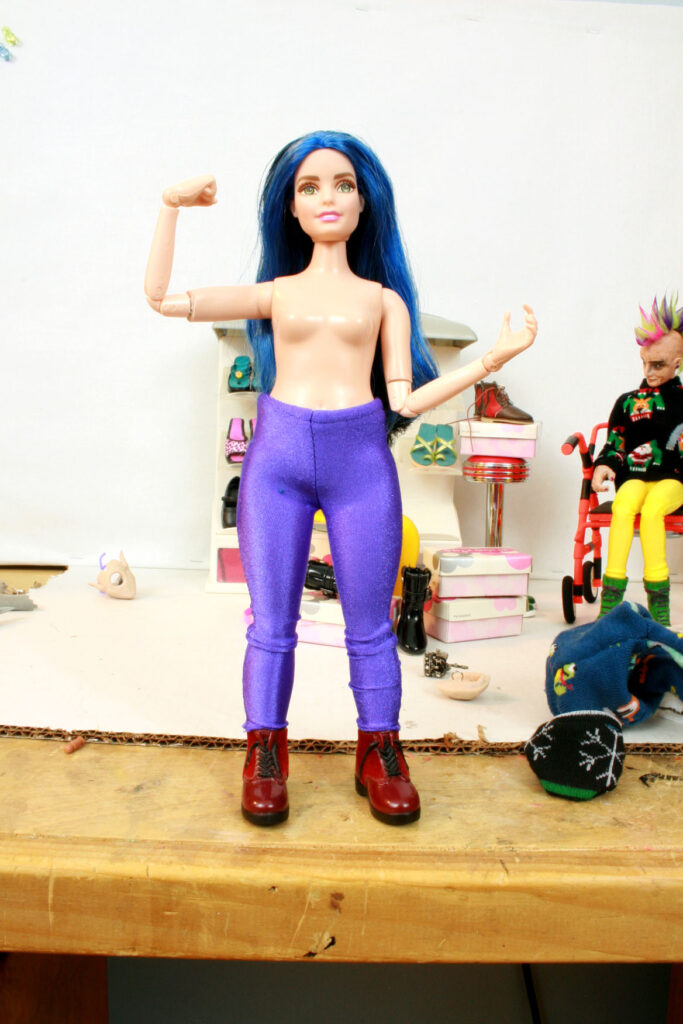 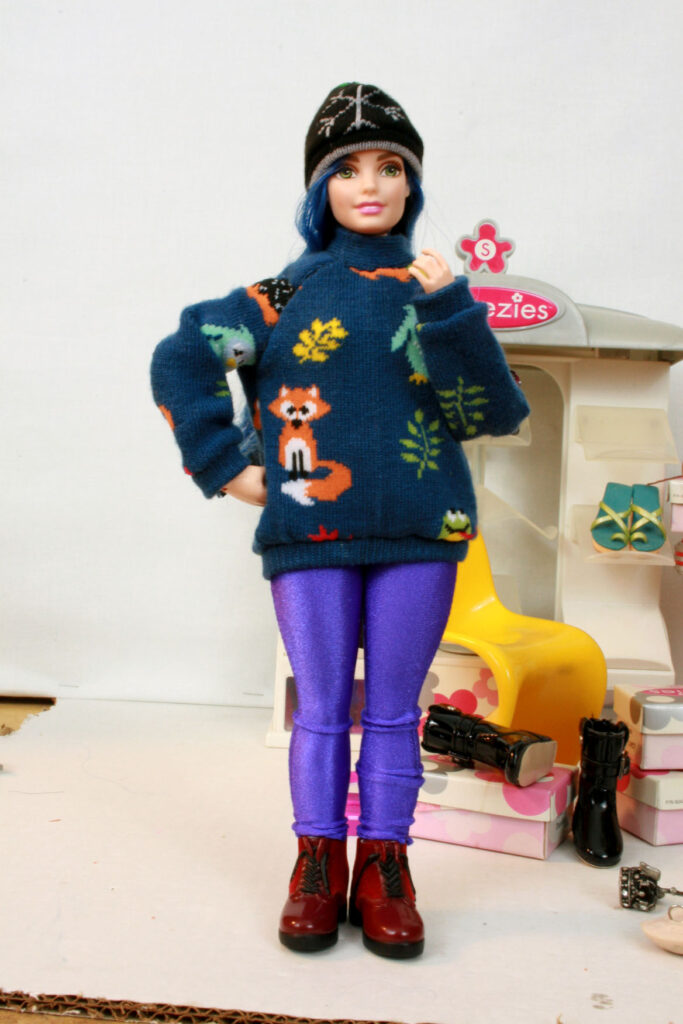 I have not articulated her knees yet because I haven’t figured out how I want to. Also I really like the shape of her legs. Hmmm…