For this project, I started off with a Hasbro Classic GI Joe [$2.00 from Goodwill] and a Storm Collectibles Dennis Rodman head [$7.99 from Good Stuff to Go]. I planned an experiment in extreeeeeeeeeme body modding, which, if all went well, would yield a more realistically proportioned body with narrower shoulders and shorter limbs. If nothing worked, well, then I was only out $2.00, and I could always find another body for the Rodman head.

After much modification, behold Lakaysha. She’s about 10.5″ tall, down from 12″ originally. Since the Rodman head didn’t have much neck attached, I carved down the default GI Joe head and mounted the Rodman head on the remaining base. Hot glue kept it in place. I cut the sides of the chest off, scraped down the raw edges, then reattached the arms, sealing raw areas with hot glue and Instamorph low melt plastic pellets, which are like moldable hot glue and the coolest shit ever! [Thank you, @natalunasans!] There was no substantial reduction in width, maybe 1-2mm, but the torso’s proportions improved instantly.

I hacked out sections of both thighs and calves, redrilling holes for ankle pegs and smoothing raw areas on reattached thighs with more Instamorph plastic. Knee swivel motion was lost, but I don’t care.

I hacked off a section of the wrists, thinking that the arms needed to be shortened. However, they did not, so I removed the hands, which I had to do anyway, and reglued the cut-offs back on. I spent most of my time carving out the upper arms to get more than 90 degrees out of the single-jointed elbows.

Why yes, it looks like one of my usual rushed hatchet jobs, but you know what? None of it shows when she has clothes on! Stay tuned for pictures, once I hem her pants, find her some hands, add hair, and touch up her goatee. 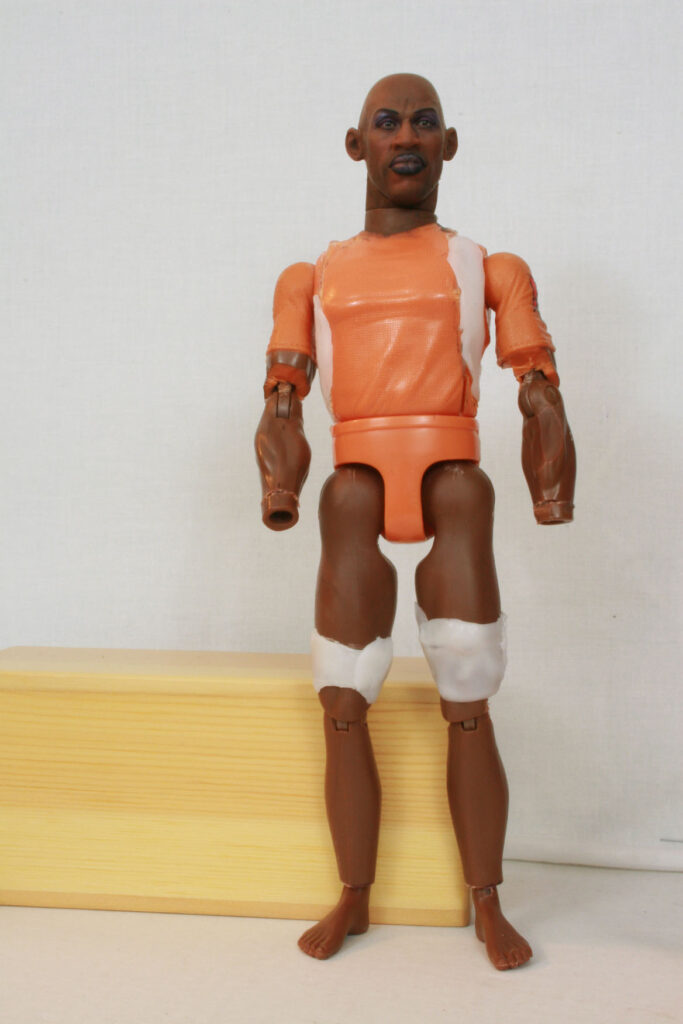