My interest in cemeteries, funerary statues, and Doctor Who converges in the Weeping Angels. Since I stare at Carnelian’s cemetery/magic set every time I’m at my computer, I started thinking that it needed more 1:6 scale statues. Sure, I have an Angel of Grief, but she’s more like 1:9 scale. I also have a meditating skeleton, but I was thinking of something that could actually work as a realistic cemetery denizen [assuming that you don’t look at its FANGS]. Therefore I thought that I should make a Weeping Angel.

BCS made 1:6 scale Weeping Angels, but they stink for a few reasons. 1) They’re not articulated figures. They’re big resin door stops with swappable heads and arms. 2) They’re expensive. I wanted an affordable interpretation with more poseability. For mine, I decided to mount the upper half of an action figure on a solid base [i.e., the floor-length skirt]. The solid base would provide enough of a statuesque look, but she could still menace people with her upper body articulation.

For maximum effectiveness, I wanted a yelling or snarling headsculpt for my Angel. I had very little luck, as most open-mouthed sculpts for female action figures look relaxed or seductive at best and blank at worst. TB League made a 1:6 scale version of comic book hero Shi, however, with an angry expression. With her crinkled nose, lowered brow, and individually sculpted teeth, she’ll serve quite nicely, even if she is fangless. You can see her below at left. I’m going to remove her hair and current paint, then sculpt her chignon, make her chiton out of some sort of semi-stiffened fabric, then paint the whole thing with spray paint that has a stone effect. 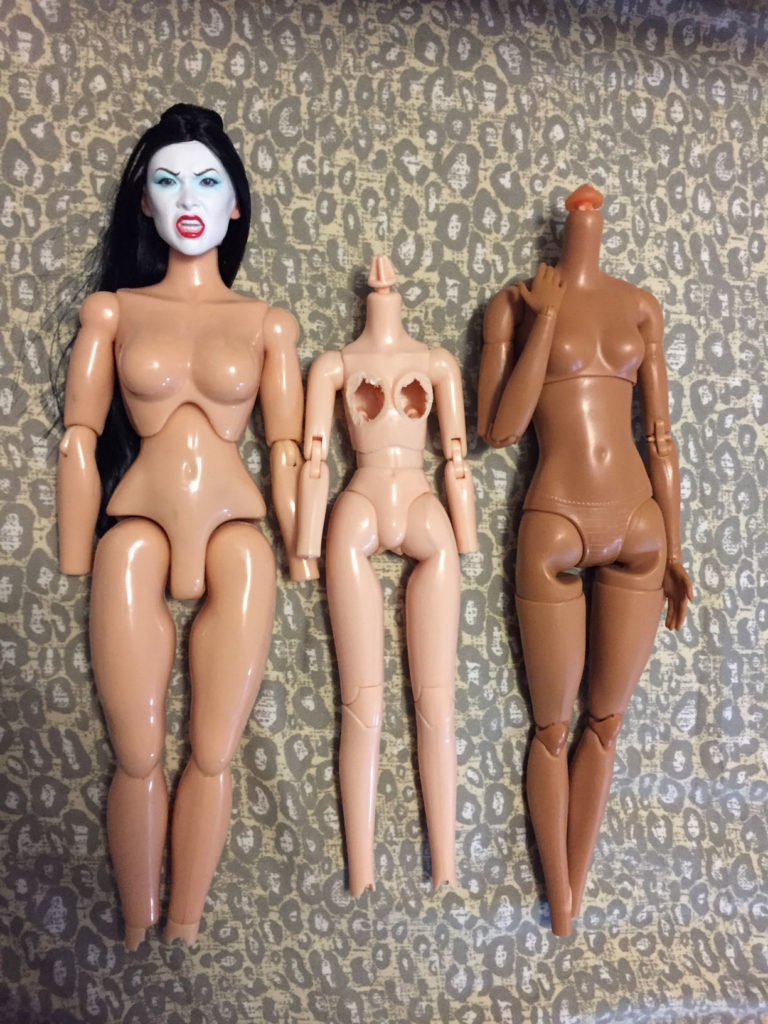 In other news, I hope to use the two figures to the right of the prospective Angel to make a body for 1:9 scale Alison. The one in the middle, a Noix de Rome Ninie, has a decent lower half and neck, but the upper body is too narrow, and the arms stink. I’m hoping to swap the current arms for the Mattel Made to Move arms at far right, bulk out the torso more, add breasts, and make thigh swivels. Oh yeah…and some feet or something. :p