Charlie is a Cyber person that the Dork fam encounter on Newland, the Mondasian colony ship from which they rescue Bill. She experiences the Doctor’s first experimental refacement procedure, in which they created a 3D printed flexible face from her memories of what she used to look like, then hitched it up to her brain [the only organic part of her remaining besides spinal cord] so she could make faces. Anyway, though she has her face back, her body remains obviously Cyberized, so I’ve long wanted a sort of clunky armored robot body for her. Now I have one!!! 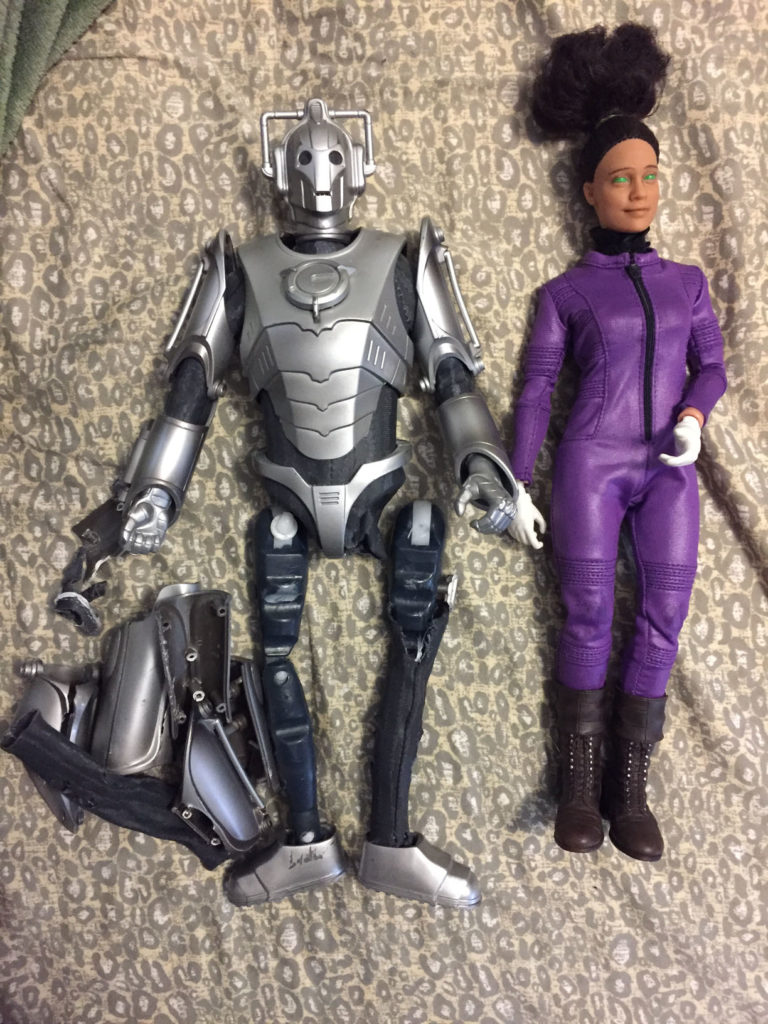 I think that’s an Underground Toys Cyber leader person figure over on the left. The limited articulation works fine for what Cyber people usually do [stomping around and shooting shit], but it didn’t work for my purposes. I can handle the 90 degrees of bend at both elbows and knees. I can handle the limited range of motion in the shoulder, as well as the lack of torso joints. I cannot, however, handle a doll that can’t sit. Yeah, you heard me. This doll cannot bring thighs perpendicular to torso. Furthermore, the wide crotch keeps it from putting its thighs together, arrrrrrrrrgh!

The picture above illustrates the challenge I’m facing with the Cyber doll. The overall problem is SHITTY ARTICULATION. I thought long and hard about how much I wanted to mod this doll. The answer was, As little as possible, so I selected three key areas for improvements: hips, wrists, and neck. Hips, as discussed earlier, need a narrower crotch and greater range of motion. Wrists have swivel articulation only, so they need replacement with ball joints. Neck is only a swivel too, so I must build up the neck so I can mount Charlie’s head on a more usual ball and socket apparatus.

These would be intensive mods, but not particularly difficult…except for two complications. First, the figure is wearing armor. And this isn’t just any armor. This is armor that’s bolted to the doll by holes going right through the limbs. I thought the armor would easily crack at the seams. No way. This armor cracks wherever it wants to. Fortunately I can interpret all damage to the armor as weathering. :p

Second, the doll is sewn/glued into a silver grey bodysuit. This increases the robotic look, but provides another layer of complexity for mods. You can see where I got exasperated, breaking the armor, ripping the bodysuit legs, and snapping the legs at the hip joints. This disassembly is all part of my cunning plan to reconstitute it into an appropriate fkin body for fkin Charlie!