Two years or so ago, Big Chief Studios put out some amazing prototype pics for their doll of Geoffrey Holder as Baron Samedi in Live and Let Die. I saw the wonderfully expressive open-mouthed face and promptly declared that it was clearly a doll of the Doctor from some other universe. A whole history developed in my mind.

Before they were THE Doctor and the Judge, they were just two kids who were the best of friends who swore that they’d always be together and do the right thing. They drifted apart when, in early adulthood, D was recruited to be a medical assassin for the Council of Time Fascists, while J was recruited to enforce the elite fascist policies. They both compromised themselves so deeply that they were sure that the other wouldn’t accept them anymore, so they stayed away from one another.

The Time War was when shit really went down. THE Doctor, who was by then THE Doctor, was killing in the service of “the right time,” whatever that way, while the Judge, who was by then the Judge, was rendering verdicts in service of the Time Fascists and their concept of a “pure timeline.” Eventually THE Doctor rebelled and refused to kill, which brought him to trial, presided over by the Judge. Either she recused herself, or she just blatantly refused to convict him, so the fascists felt compelled to punish them both.

Then things start looking up because there was a horrendous space kablooey [or something], and an explosion kicks both THE Doctor and the Judge out of their universe and onto Alison’s Earth with complete retrograde amnesia [because why not?!]. Alison, ofc, meets the Judge because she has an affinity for Time Dorks like the Magister [Shalka Master, one of her partners in my fics] on her side of the pond, while Bill, ofc, meets THE Doctor because she has an affinity for Time Dorks like him. Because the Judge knows a lot about THE Doctor and vice versa, Alison and the others in the U.S. [i.e., the Magister and the Stylist] assume that the Judge is the Doctor from another universe. Bill and the others in England [i.e., the Doctor and Harry] assume that THE Doctor is the Master from another universe. Hah!

Anyway, the Dork Fam brings THE Doctor and the Judge together and helps them to remember who they are. Alison and Bill assure them that this is a happy ‘verse where no one is conscripting you, monitoring you, or making you condemn your friends. Both THE Doctor and the Judge’s minds are rather blown by the possibilities. With Alison’s permission, they decide to hang out in her universe for a while.

THE Doctor is so called because that’s how he says his name. “I’m theDoctor, the first, the best, the one and only!” He’s on his first regeneration [as is the Judge] and proud of it. He’s an extroverted, flamboyant performer with a penchant for sleight of hand and singing [really loudly].

THE Doctor is a Big Chief Studios Baron Samedi with white makeup removed. His outfit is a sequined dress from my boxes of stuff, a blazer by Dolls Ahoy, and Extremely Gay slide sandals. I made them from Pride rainbow ribbon and cardboard.

The Judge is a much more reserved person, annoyingly precise and insistently punctilious. She tends toward formality and standoffish analysis. She’s just as much a flamboyant performer as THE Doctor, but she prefers to do so deadpan and/or to let her appearance speak for itself. She makes and designs her own clothes.

The Judge is a Fresh Dolls Fresh Girls Lynette rerooted with Pride embroidery floss by @trufflesmushroom and a repaint by me. Her outfit is a black Lycra bodysuit, a robe from Hot Toys Darth Maul, male action figure gloved hands adapted for her wrists, boots from a Mattel WWE Superstar, and a veil made of fabric from my bins. 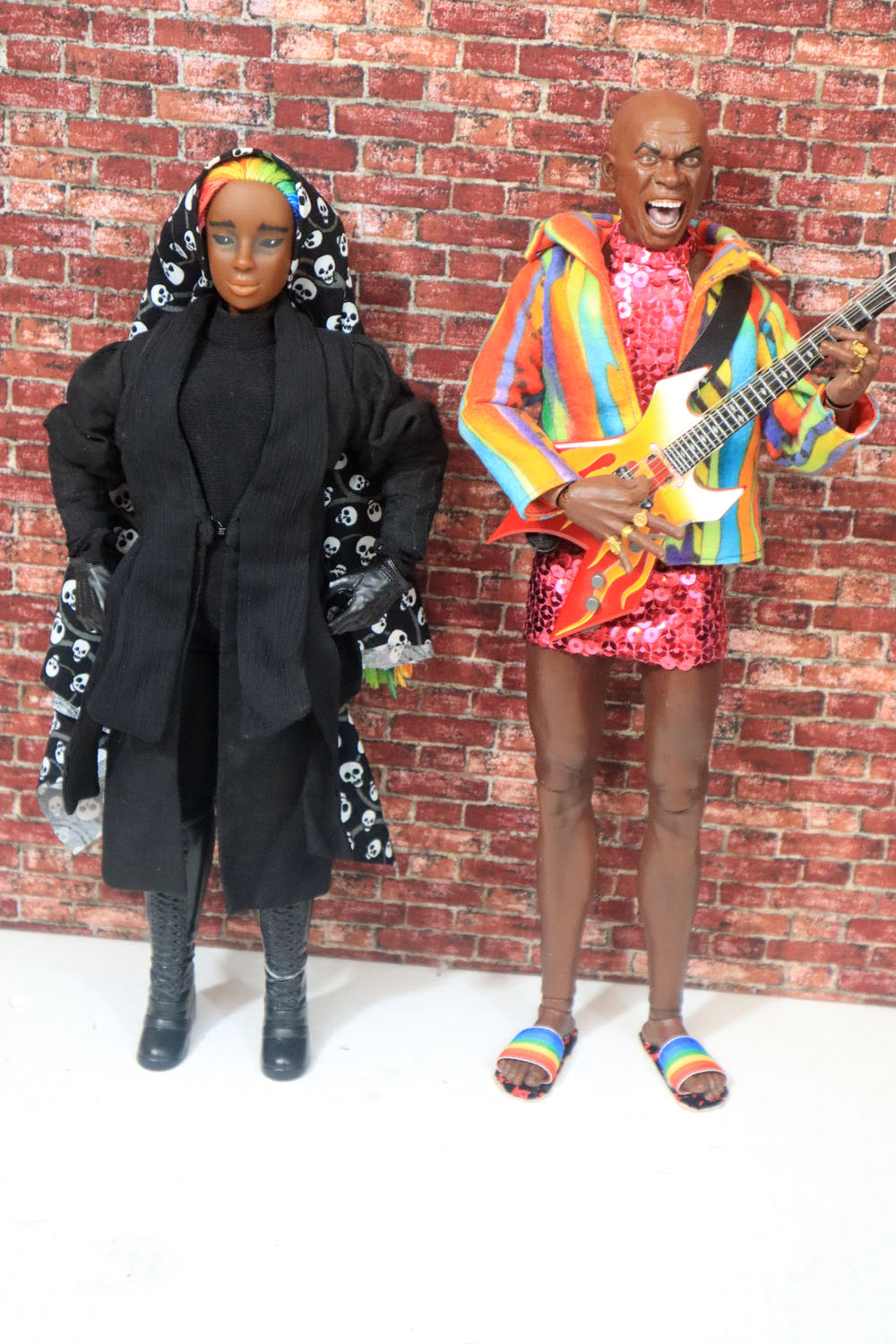 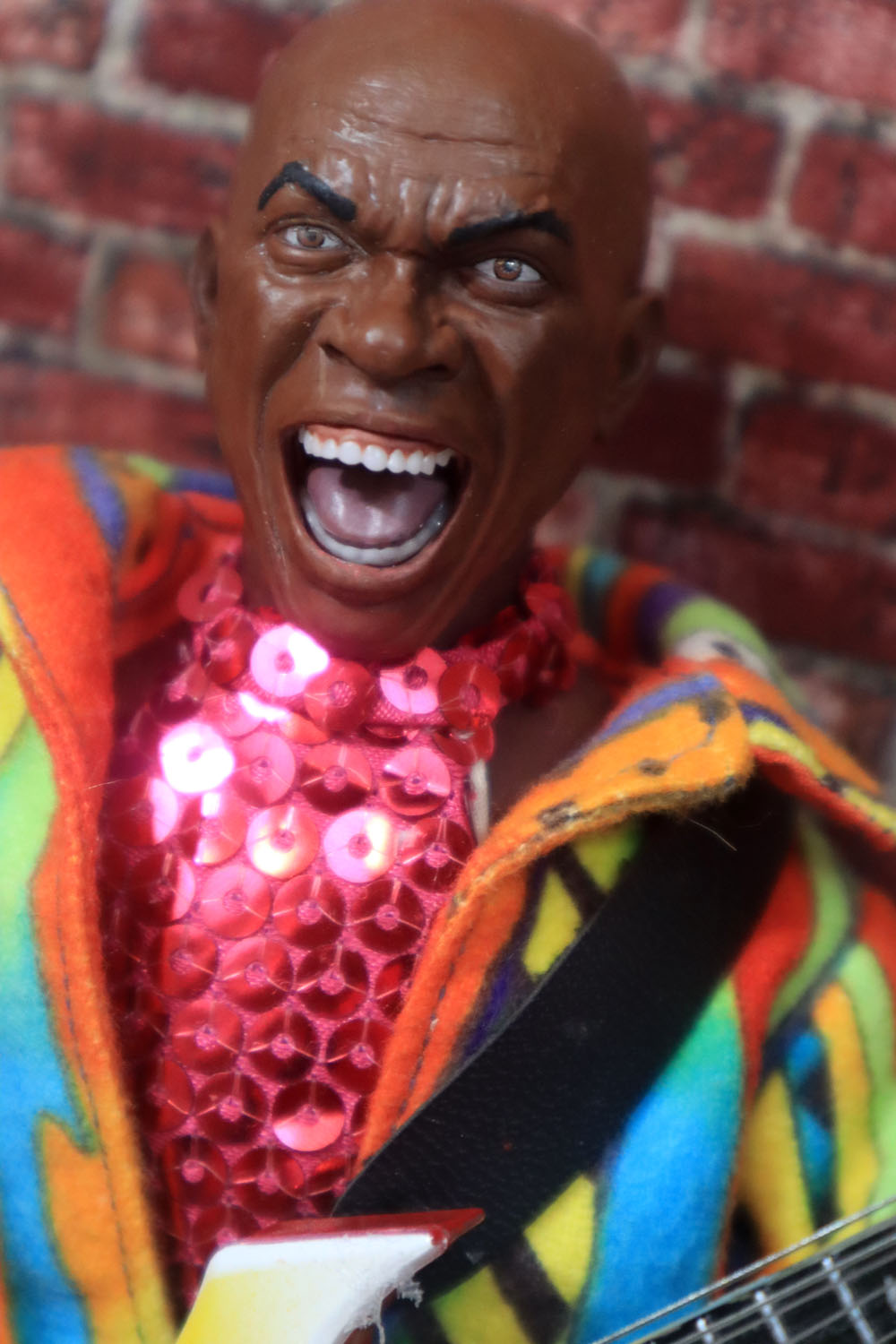 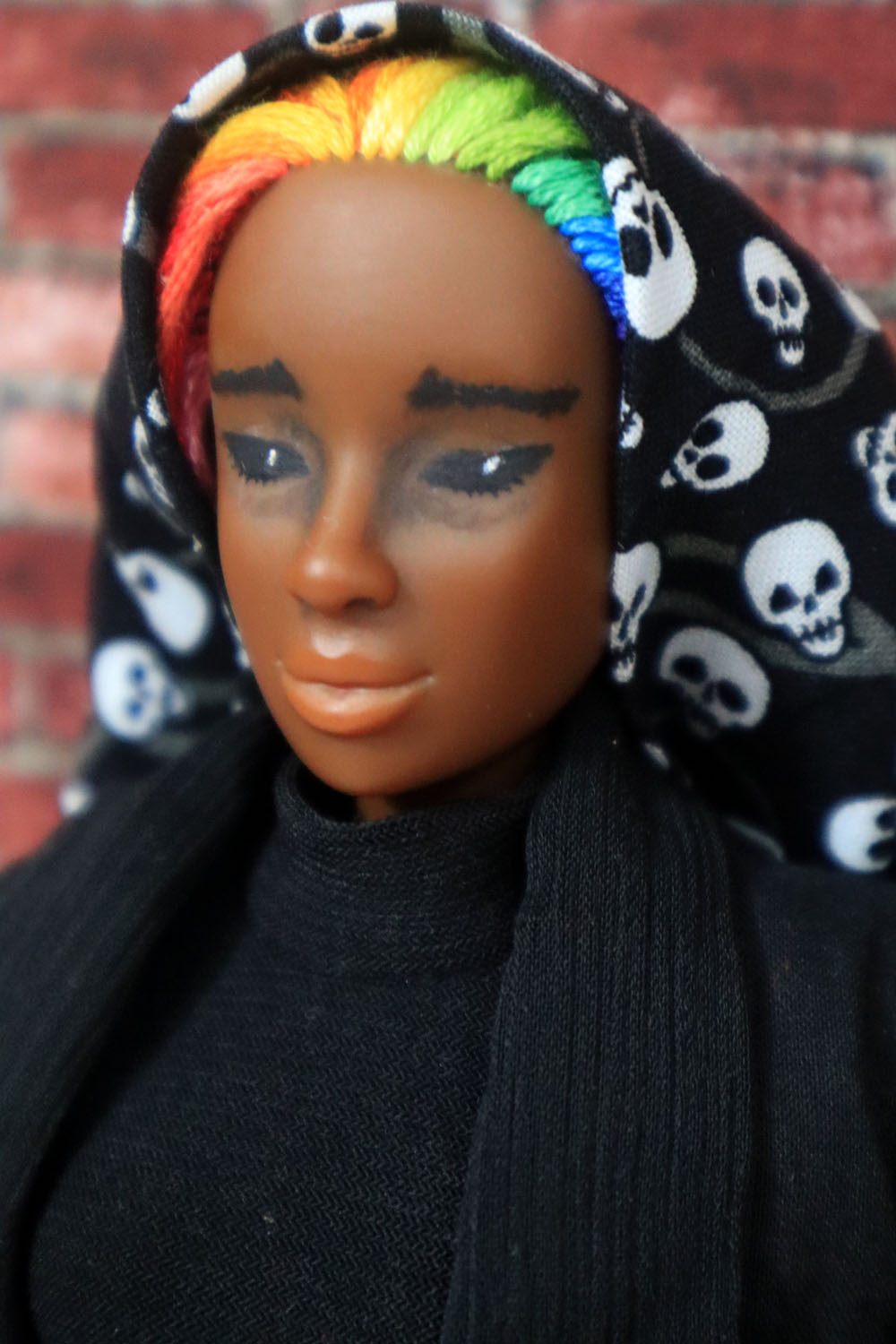 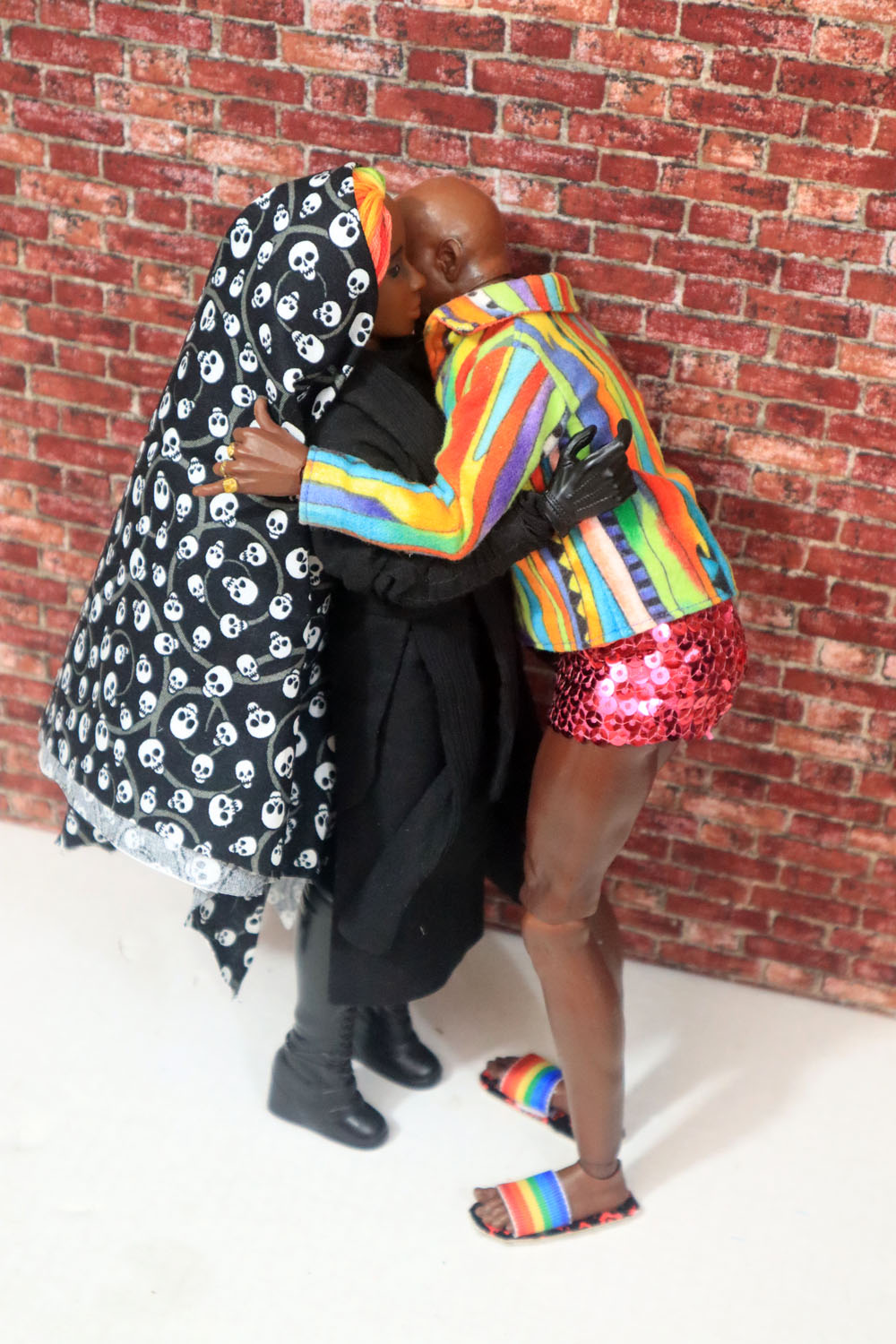 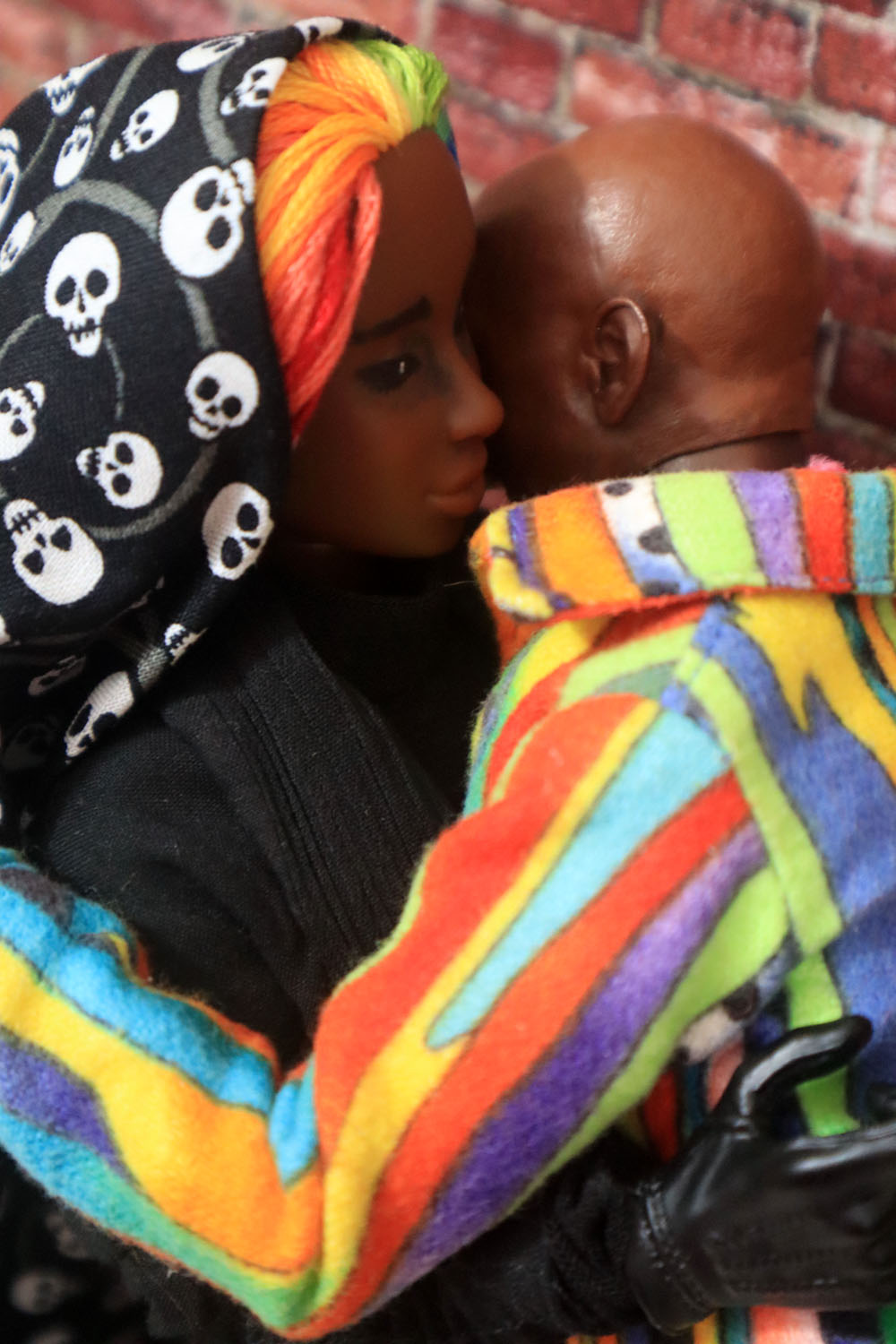 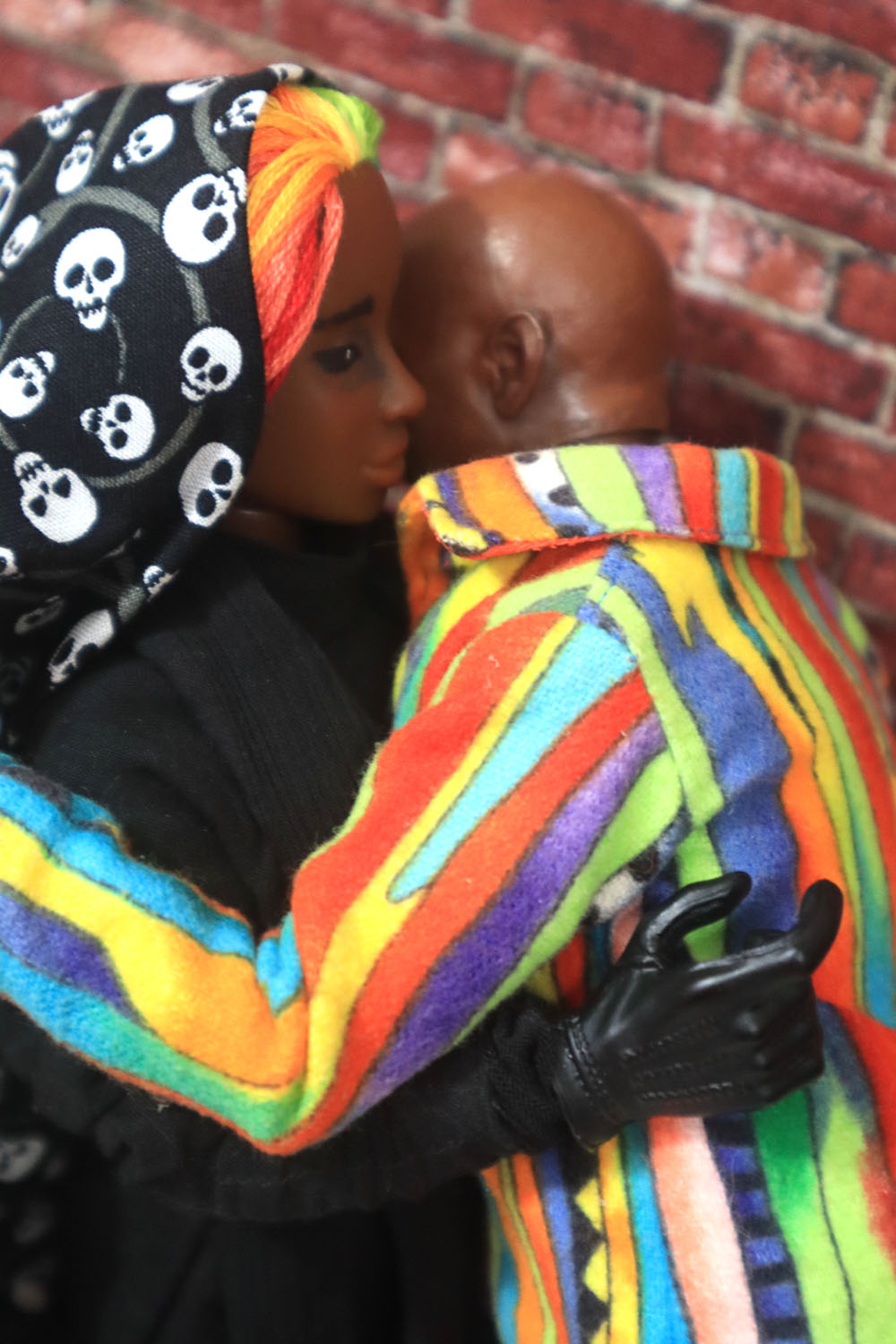 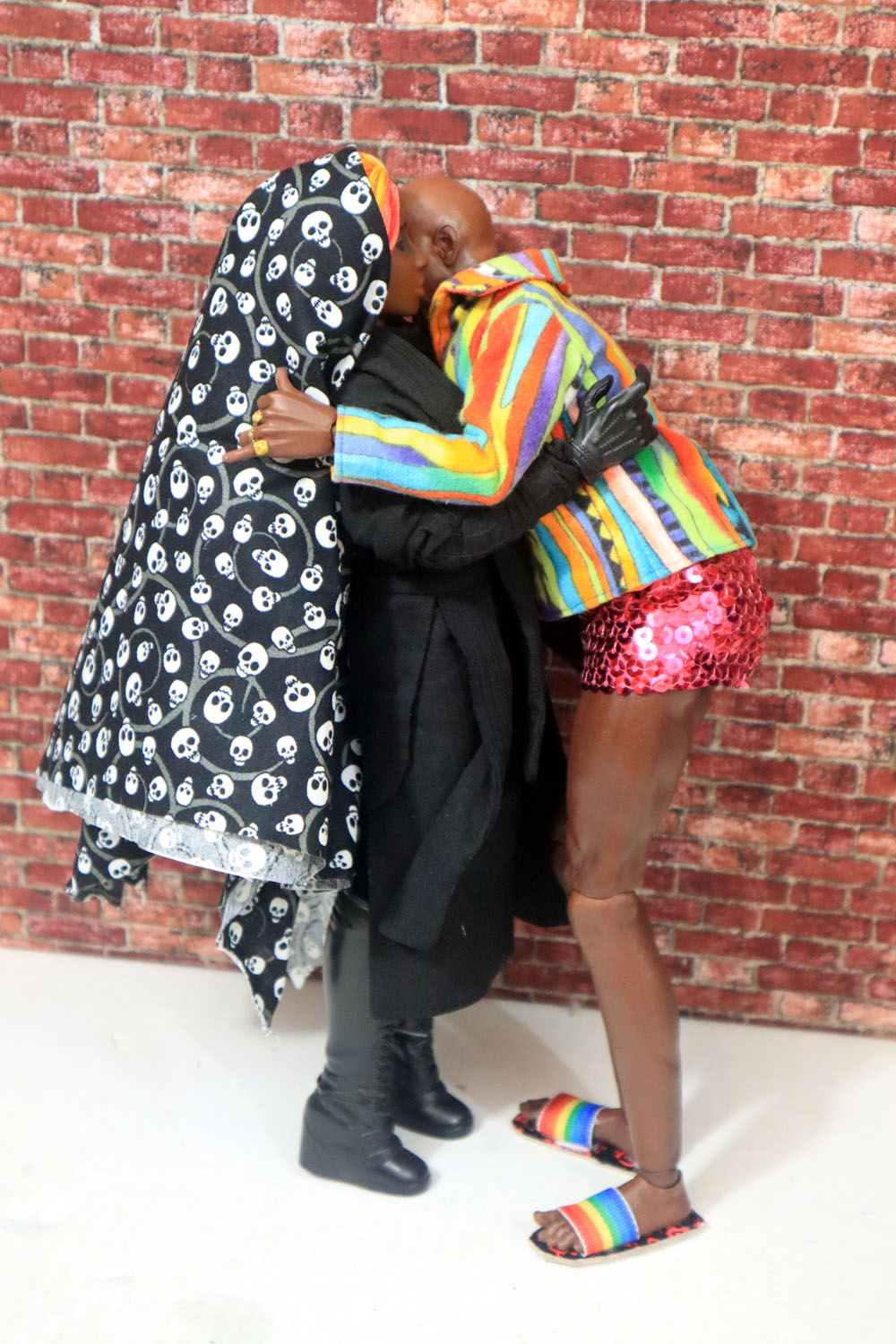